These species, introduced unintentionally or intentionally by humans in new places, can transmit new diseases, devastate crops, alter ecosystems and even eat up human infrastructure. Scientists have been evaluating the impacts of these species for some time and trying to raise awareness about the problem they pose, but the problem remains little known both by societies and by the politicians who must manage it. One way to raise public awareness is to expose the economic cost of invasive species.

Worldwide, it has been estimated that invasive species cost the global economy more than $ 1.28 trillion in damage and efforts to control them from 1970 to 2017.

The values ​​were calculated from the review of 19,000 scientific articles that detailed the costs incurred in given places and times. From these works, a statistical model was created that evaluated the annual costs, taking into account inflation, currency changes and time scales analyzed. In the period under review, annual costs doubled every six years, peaking at 162,700,000 in 2017. The problem is getting worse

Globalization has accelerated during the period studied, increasing both commercial traffic of ships and airplanes, as well as tourist trips between countries and continents. Each human and goods movement represents a possibility of taking animal or plant species from one place to another as stowaways in our vehicles. International trade, agricultural expansion, deforestation and the urbanization of new regions have accelerated the spread of invasive species by facilitating their access to new areas.

Most of the cost of invasive species is a consequence of the damage they generate to the economy. These can be health costs in the case of animals that transmit diseases, or losses in the production of forests or crops in the case of pests. In the 47 years covered by the study, the damage amounted to $ 892,000,000,000, while the money spent to control or eradicate the species was about 66,000,000,000. The data shows that investing more in monitoring and extreme biosecurity measures would help minimize their impact. It is much cheaper to watch and monitor than to wait for the species to establish and spread causing great damage. 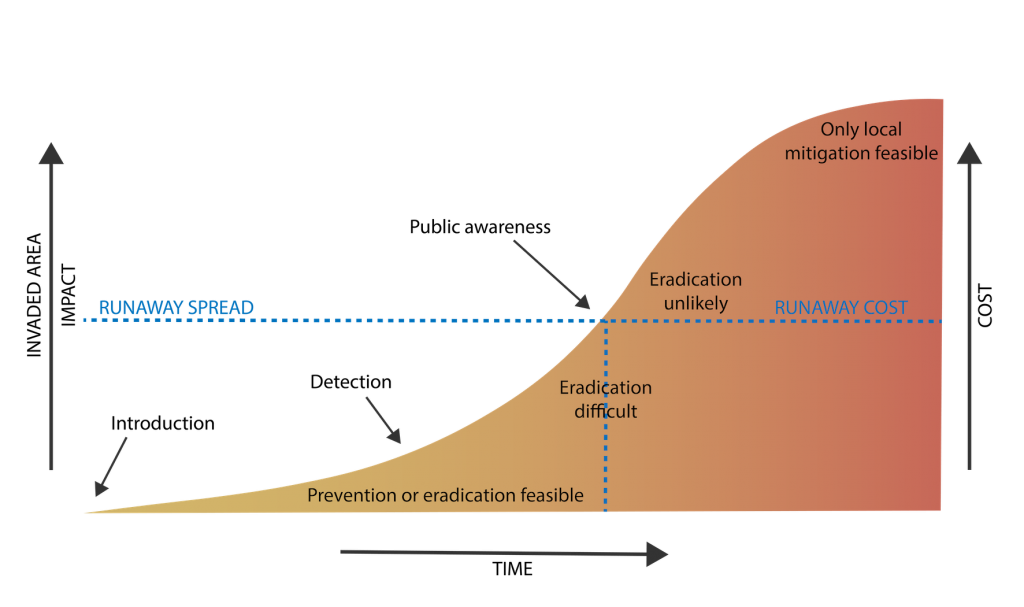 Fig. 1. The theoretical curve of an invasive species over time, as it has expanded into new areas since its introduction, increasing its impact and economic costs. For a time the eradication of the species is possible, but at a certain point it becomes impossible and only local measures can be taken to mitigate its effects. Prevention measures and surveillance systems help the species to be detected earlier and to act in time to eradicate them. Figure modified from the original of Ahmed et al. 2021. Source: Mosquito Alert CC-BY

Not all invasive species cause the same economic damage, in fact a few have the greatest effect. If we look at the ten species with the greatest impact, we will see that they are all animals, with insects that generate the most losses or expenses, with invasive mosquitoes topping the list.

Mosquitoes, the invasive species that cause the most damage

The Aedes aegypti (yellow fever mosquito) and Aedes albopictus (tiger mosquito) mosquitoes are the species that cause the most damage, about 149,000,000,000. The two species have spread widely around the world in recent decades and with them the diseases they are capable of transmitting, including dengue, chikungunya, Zika and yellow fever. Currently 40% of the human population lives in areas at risk of contracting dengue due to the existence of one of these two species. These regions include part of the population of southern Europe where the tiger mosquito has established itself, which has already led local cases of dengue and chikungunya outbreaks in the last decade. A study from a few years ago estimated that mosquito-borne diseases (not just Aedes) were the biggest economic hit from invasive insects: dengue, West Nile fever, chikungunya, and Zika. 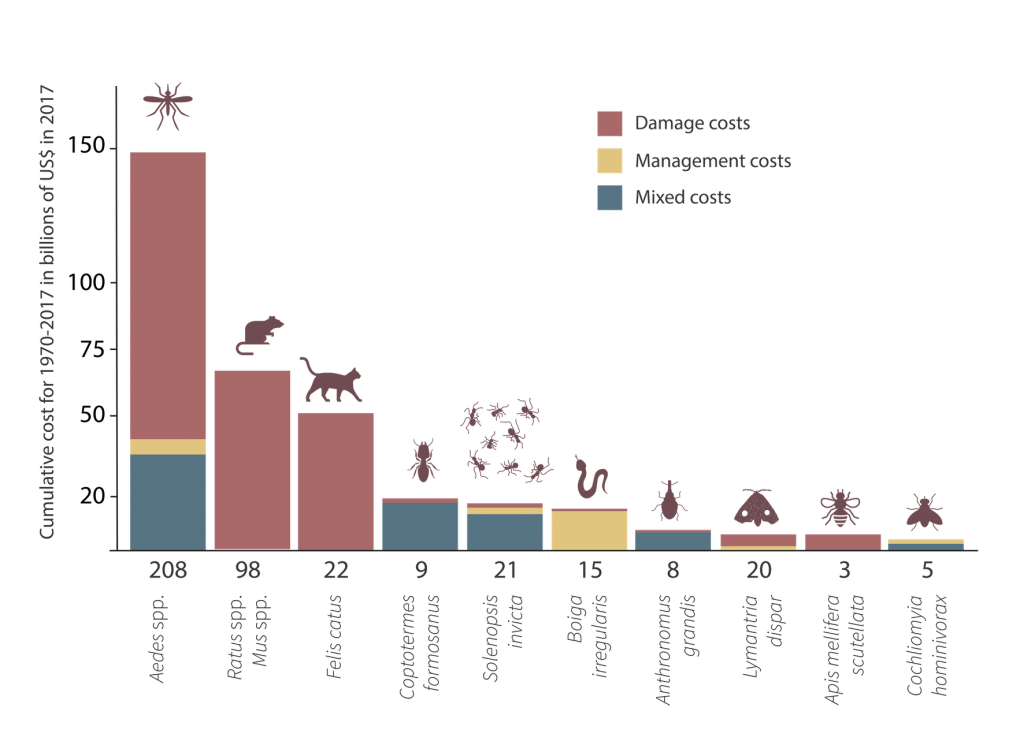 Fig. 2. The ten groups of invasive species with the greatest economic impact. The number of each group refers to the number of scientific studies from which the cost has been estimated. Figure modified from the original of Diagne et al. 2021. Source: Mosquito Alert CC-BY

Mosquitoes are followed by rodents, rats and mice, animals that have been traveling from one place to another on board our ships for thousands of years. These animals generate damage both at the public health level and at the ecological level. In addition to being able to transmit diseases in urban spaces, they harm other small mammals and birds when they arrive in new places. Its effects are especially harmful on the islands, where they have extinguished several species and destabilized ecosystems. In anthropic environments, rodents can generate many losses by damaging crops, consuming stored products, destroying property and transmitting diseases.

Fig. 3. Economic cost in health aspect caused by invasive insects. Diseases transmitted by invasive mosquitoes such as dengue, West Nile fever, chikungunya and Zika are among the most costly. Take into account that the scale of the graph is logarithmic. Figure modified from the original of Bradshaw et al. 2016. Source: Mosquito Alert CC-BY

The cat occupies the third position although most people do not see it as an invasive species, the truth is that in many places it acts as such. The domestic cat is native to North Africa and the Middle East, the species self-domesticated by going to human settlements in the early days of agriculture attracted by mice and rats that fed on accumulated grain. Their success as mouse hunters made people include them in our homes and as one more member of the crew on ships to eradicate mice. The consequence of this has been that cats have colonized and become feral in much of the world, including many islands where their ecological impact is enormous by predating and extinguishing species.

Termites and ants occupy the fourth and fifth position. Termite colonies wreak havoc on wooden structures, from houses to bridges, at the same time that they can affect fruit tree crops, while fire ants stand out for their aggressiveness, devouring the seeds of crops, affecting grazing lands and biting livestock and humans.

The costs of invasive species could be reduced by investing in preventive measures, including risk assessment, proactive surveillance and early detection. The cross-border nature of the invasions requires international coordination and collaboration, such as the one being carried out by the AIM-COST program and the VEO project at the European level in which Mosquito Alert participates for the monitoring, control and risk assessment of the invasive mosquitoes.