AtrapaelTigre is now Mosquito Alert: a citizen platform for studying and controlling the mosquitos that transmit global epidemics

AtrapaelTigre is now Mosquito Alert: a citizen platform for studying and controlling the mosquitos that transmit global epidemics

This new program updates the project previously known as AtrapaelTigre, and includes the mosquito Aedes aegypti which is responsible for the spread of Zika virus. The updated project will implement an early warning system based on citizen science for the detection of the mosquito’s possible arrival to Spain. Also, monitoring of the presence and spread of the tiger mosquito will be expanded with the objective that the data be incorporated into Spanish systems of public health management and epidemiological research. 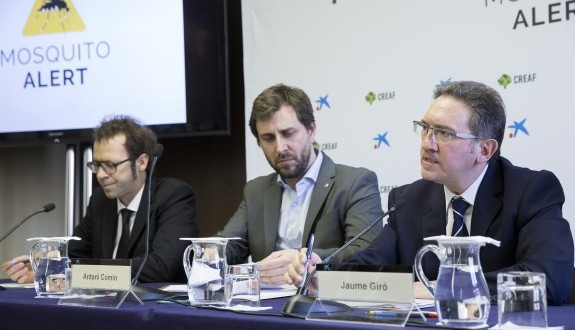 Picture taken at the press conference.

Antoni Comín, Minister of Health of the Generalitat de Cataluña, Jaume Giró, General Director of Fundación Bancaria “La Caixa”, and Frederic Bartumeus, ICREA Research Professor also representing CREAF, today presented the program Mosquito Alert, fruit of an alliance between the institutions. The new project will promote research, monitoring, and control of mosquitos mainly responsible for transmission of dengue, chikungunya, yellow fever, and Zika. This agreement renews the citizen system for monitoring of the tiger mosquito (Aedes albopictus) and will expand it to include the mosquito which transmits yellow fever (Aedes aegypti) which is also responsible for the current spread of Zika. The first effect of this new agreement is that the previous system, known by the name Atrapa el Tigre, will change into the program Mosquito Alert.

One of the project’s aims is that both the alert system for Aedes aegypti and citizen monitoring of domestic and expanding populations of tiger mosquitos play a larger role in public health management systems and epidemiological research.

“We live in a globalized world, and this phenomenon leads to changes which have direct consequences on people’s health. We are increasingly exposed to biological agents responsible for transmissible diseases. This is the case of appearances of diseases such as dengue, chikungunya, or zika,” says Jaume Giró, General Director of Fundación Bancaria ”la Caixa”. Frederic Bartumeus, director of the project, adds: “We are working to involve different actors and public and private institutions in the tiger mosquito problem in Spain, including citizens, epidemiologists, entomologists, and modelers.”

Just like its predecessor, Mosquito Alert will continue carrying out citizen monitoring for the presence and spread of the tiger mosquito.

“We will only be able to manage current risks if we coordinate institutions, science and citizens. The Mosquito Alert program is an example of this,” says Antoni Comín, Minister of Health of the Generalitat de Catalunya. The project also hopes to make great leaps in expanding its number of users in an exponential fashion. In 2015 the mobile application was downloaded 10,000 times and 4,000 possible tiger mosquito locations were reported. 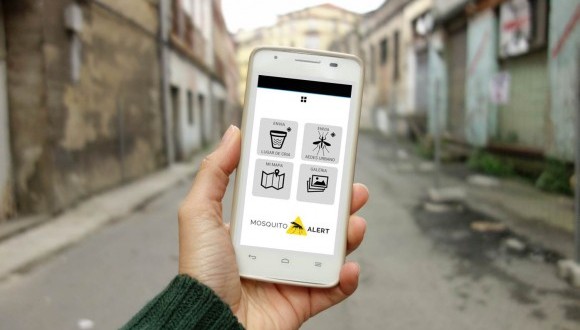 It is hoped that with the new platform these numbers will increase significantly, creating data for big data, and capable of leading to models which may predict, for instance, the distribution of the mosquito or the epidemiological risk of transmission of the diseases they carry. Finally, Mosquito Alert aims to support specific control responses and maneuvers, effective in real time, useful for the management of these two mosquito species. In order to do this, data supplied by citizens and mathematical models will be shared with the entities which oversee the situation.

Aedes aegypti is closely related to the tiger mosquito (it belongs to the same genera, but is not the same species) and is the main vector of dengue, chikungunya, yellow fever, and Zika. To date this mosquito has not been detected in Spain. Mosquito Alert offers a mobile application which allows people to report when they believe they have seen one of these mosquitos.

The novelty of the new project is that citizen science will also help detect if the yellow fever mosquito, the transmitter of Zika, arrives to Spain. A new feature of the application is that it will now help users differentiate between these two species of Aedes before sending information. If hundreds of thousands of people collaborate by notifying about mosquitos in their area, it will be possible to monitor the expansion and proliferation of the tiger mosquito as done to date.

The latest data confirm an extended presence of the tiger mosquito along the eastern Spanish coast (coastal provinces of Catalonia, the Community of Valencia, and the region of Murcia) in addition to its advance northeastwards, to the island of Majorca. Generally speaking, the citizen data suggest that the mosquito is propagating from the eastern coast towards Andalusia and the interior regions. In fact, in 2014 and 2015, with the help of validated citizen data, experts including Dr. Bartumeus, and national monitoring networks, the arrival of the species to Andalusia and Aragon was confirmed.

Also, the arrival of the mosquito to the province of Lleida in Catalonia was confirmed. Since 2014, more than 360 Spanish cities have been associated with citizen sightings validated by experts as possible or probable tiger mosquitos. Catalonia is the Autonomous Community with greatest number of cities with tiger mosquito presence (189), followed by the Community of Valencia (115), the Balearic Islands (21), Andalusia (14), the region of Murcia (13), Aragon (5), the Community of Madrid (2), Castilla-La Mancha (1) and La Rioja (1).