The Big Mosquito Bytes project has been selected within the “la Caixa” heath call. The project will combine citizen science and other massive data sources to develop innovative models that illuminate the risk of mosquito-borne disease in real time. The project, led by CEAB-CSIC, involves scientists from UPF, the Max Planck Institute for Demographic Research, the National Center for Epidemiology of ISPIII and CREAF participate, and draws heavily on the Mosquito Alert citizen science platform.

The “la Caixa” Banking Foundation promotes the Big Mosquito Bytes project with one million euros to help prevent outbreaks of mosquito-borne diseases. The project, led by Frederic Bartumeus, ICREA researcher at CEAB and CREAF, will use citizen science and big data to make real-time predictions of the risk of mosquito-borne diseases like dengue, chikungunya and Zika. “We propose to innovate epidemiology by developing mathematical modes based on real-time data intelligence,” says Bartumeus. The models will incorporate current data on imported mosquito-borne disease cases detected in Spain, along with environmental and climate data and socio-economic and human mobility data. The models will also rely on data from the Mosquito Alert citizen science application showing the distribution of disease-vector mosquitos. The result will be significant improvements in our ability to anticipate the focus of infection and the risk of epidemics, and this will allow more effective entomological and health management. According to Bartumeus, “this improvement in management is the best vaccine to protect the population.”

One of the innovative aspects of the project will be its use of new technologies to study where and how people move, detecting patterns that are important for epidemiological models, and studying how these patterns change at different temporal scales – across days, weeks, or years. Similarly, the project will examine how precipitation and temperature influence the amount of mosquitoes and its biting behavior throughout the year. Big Mosquito Bytes will also use the Mosquito Alert app to learn more about the number of bites people are receiving at different times. The Mosquito Alert mobile application is part of a pioneering system of citizen science in Spain that allows anyone to report the mosquitoes the find by uploading photos. Now, thanks to Big Mosquito Bytes this application will also have the possibility to collect the number of bites received daily, an option so far not available. 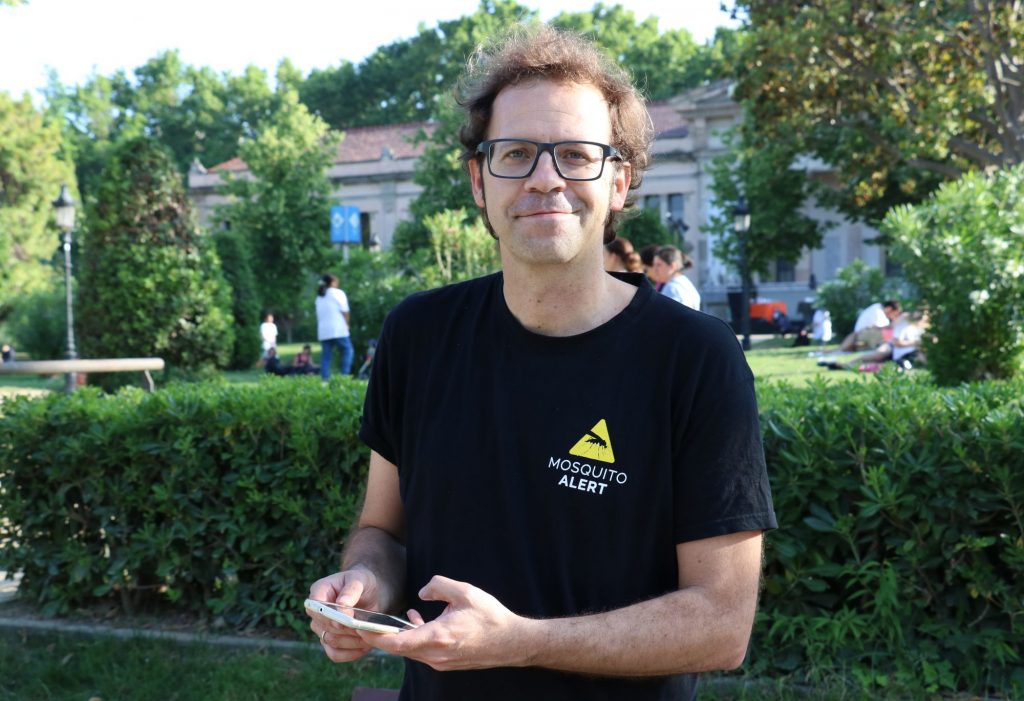 The collaboration between the citizens and the Public Health institutions will allow a greater flow of information and make that one accessible to the population. “Real-time maps will allow better management and better knowledge of the risk of outbreaks of diseases transmitted by the tiger mosquito,” says Diana Gomez-Barroso, an epidemiologist at the National Center for Epidemiology (CNE) CIBERSP / ISCIII. “Big Mosquito Bytes will work mainly on the risks of the tiger mosquito (Aedes albopictus), which is currently the only mosquito that can transmit dengue, Zika and chikungunya, on the Iberian peninsula, but Mosquit Alert is prepared for the detection of the yellow fever mosquito (Aedes aegypti). An even more fearsome transmitter for dengue”, said Roger Eritja, expert entomologist of CREAF.

“This is a situation where an important societal challenge can be addressed only with an interdisciplinary team that includes ecologists, demographers, epidemiologists and computer scientists”, said Emilio Zagheni from Max Planck Institute of Demography (MDPIR). For that reason the team led by Frederic Bartumeus will consist of experts from different disciplines: the sociodemographer John Palmer from Pompeu Fabra University (UPF), the demographer Emilio Zagheni from Max Planck Institute for Demography (MPDIR), the epidemiologist Diana Gómez-Barroso from the National Center for Epidemiology (CNE) CIBERESP / ISCIII and the entomologist Roger Eritja from CREAF. Some of them are part of the Mosquito Alert citizen science platform, one of the pillars of the project.

What is the relationship between social inequality and mosquito-borne disease?

One question Big Mosquito Bytes will explore is how mosquito-borne disease patterns are shaped by social inequality and, in turn, end up exacerbating this inequality. The project will examine the ways in which urban design, human mobility patterns, social and economic segregation, and gender inequality influence the distribution of mosquitoes. “This will help us develop ways to reduce the massive and unequal burden that mosquito-borne diseases place on society worldwide” said John Palmer, a sociodemographer at the Pompeu Fabra University.

An idea shared by Emilio Zagheni who considers that “by improving our understanding of mobility and infectious disease dynamics in a scalable way, the impact and relevance of the results will go well beyond the Spanish case”.