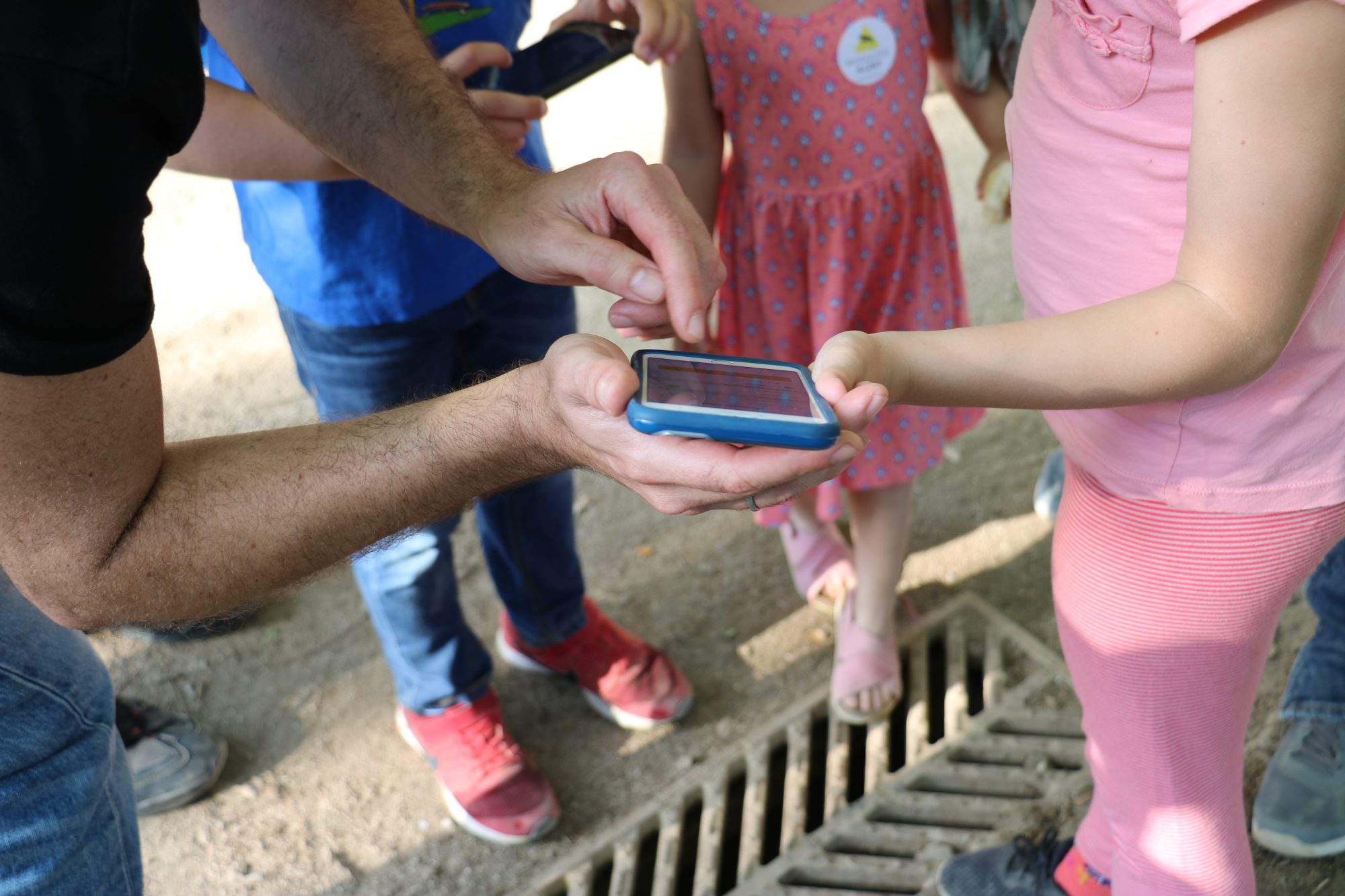 If someone had said to Luis P., a participant of the Mosquito Alert platform supported by Obra Social “la Caixa”, that the picture of the tiger mosquito sent with his mobile phone from Aragon would be a great scientific discovery, he never would have believed it.  The same goes for Jordi S., who found the tiger mosquito in the Catalan pre-Pyrenees for the first time and also raised the alert about its presence using the app. More and more researchers are interested in citizen participation in order to obtain massive data. But is this information of sufficient quality to be used in research? Today, Nature Communications has published a study which highlights how citizen science can revolutionize the monitoring of global disease vectors like the tiger mosquito.

The study, led by researchers at CREAF, CSIC-CEAB and UPF, with the collaboration of researchers at the Universities of Zaragoza and Murcia, shows that when official monitoring and control of disease-transmitting mosquitos is carried out with the aid of the Mosquito Alert collaborative platform, supported by the Obra Social “la Caixa”, the costs and needed efforts are reduced. Using data from 2014 and 2015, the authors calculated that citizen participation with mobile devices reduced the cost of traditional scientific methods by up to eight times. Traditional methods are based on setting traps in strategic areas where female mosquitoes lay eggs. 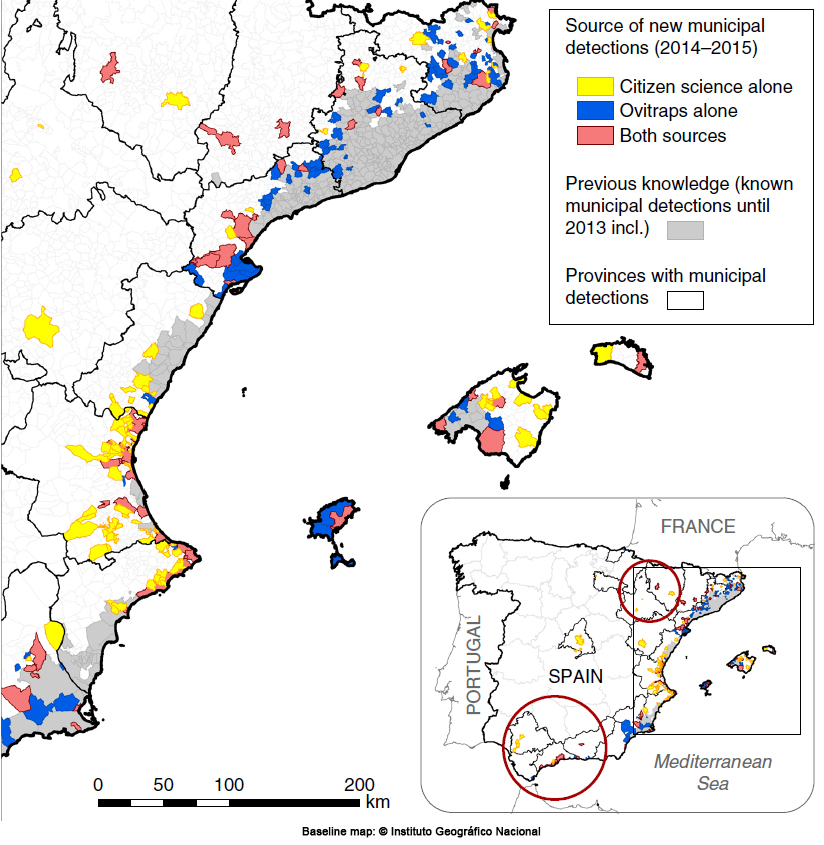 Map of new tiger mosquito detections in Spain during 2014 and 2015, depending on citizen science source, ovitraps or both. Credits: Palmer et al. (2017) CC-BY

Map of new tiger mosquito detections in the Spanish region of Andalucia during 2014 and 2015, depending on citizen science source, ovitraps or both. Credits: Palmer et al. (2017) CC-BY

But the real surprise for the scientists was when they confirmed that the citizen alerts made through the app were just as useful as those made by experts for modelling the tiger mosquito’s distribution and predicting its expansion. “The key is to collect information necessary for removing errors and accounting for sampling bias” points out John Palmer, Marie Skłodowska-Curie researcher (the EU programme supporting researchers at all stages of their career) in the Department of Politics and Social Sciences at UPF and first author of the study. The Mosquito Alert platform relies on a team of expert entomologists to validate the citizen scientist reports, which are assigned to categories according to reliability. “Every citizen receives the expert assessment of their photo directly to their mobile phone a few hours after sending it, and this way the citizens learn to recognise tiger mosquito quickly. In a short amount of time we have achieved high quality scientific data, as shown in this study”, explains Frederic Bartumeus, ICREA researcher at CREAF and CEAB-CSIC and director of Mosquito Alert.

The study authors also say that, thanks to citizen science, the tiger mosquito monitoring area within Spain has been expanded. “We now have a large network of volunteers distributed throughout the country who are willing to collaborate with science. This is much better than having to rely on a team of experts who have to travel hundreds of kilometers”, explains Aitana Oltra, scientific coordinator of Mosquito Alert. Beginning in 2014, the project has received more than 3,600 confirmed alerts of tiger mosquitos from throughout Spain, and some of these have been exceptional.

For instance, thanks to the platform’s participants, first sightings were made in Andalucia, the Catalan pre-Pyrenees, Aragon, and Lleida.  What is common to these sightings is that they are in areas far from the coastal zone where the tiger mosquito invasion began.  “The tiger mosquito spreads very fast locally, but also makes long distance jumps; without the help of all of these volunteers raising alerts, it would have taken us much more time to make these key discoveries, especially in remote places where traditional mosquito surveillance tools are not already in place”, says Roger Eritja, entomologist of the Baix Llobregat Mosquito Control Service and head of the team of experts carrying out validation at Mosquito Alert.  All of these early sightings made by citizens have been scientifically validated in collaboration with the Universities of Murcia and Zaragoza, and this will lead to more inspections and the development of country-level public health protocols.

With new technologies, the scientific world is increasingly connected to people’s daily lives. This connection is vital to address challenges arising from globalization and climate change. “Now we can go even further and calculate the probability that a given person will encounter a mosquito and, as a result, better understand better patterns of disease transmission, and place these patterns in their environmental and social context”, explains John Palmer. In fact, the researchers are already preparing new work to assess the risk of epidemic outbreaks of Zika, Dengue and Chikungunya in Spain using the data provided by citizen scientists using Mosquito Alert. These diseases have an important impact on society and exacerbate problems of poverty and inequality.

Currently, the reports made through Mosquito Alert are an aid to planning pest control measures in areas where the tiger mosquito has been present for many years, such as in the cities of Barcelona and Valencia, as well as in more rural areas such as the province of Girona. Also, thanks to the accumulated experience of studying the tiger mosquito with citizen alerts, the Mosquito Alert team has begun pilot projects in other cities such as Hong Kong (China) and Barranquilla (Colombia). Mosquito Alert also co-leads an international consortium aiming at launching these types of tools to the global scale, with participation of the United Nations Environment Programme, the World Health Organisation, citizen science associations of Europe, America, Australia, Asia and Africa, and prestigious international institutions such as the Wilson Center and Johns Hopkins University in the United States.