Coordination between epidemiologists, public health professionals, entomologists and microbiologists: key for minimizing the risk of Zika transmission in Barcelona

Coordination between epidemiologists, public health professionals, entomologists and microbiologists: key for minimizing the risk of Zika transmission in Barcelona

Since the first detection of Zika in Spain in December 2015, the Barcelona Public Health Agency has included vigilance for this virus in its Tiger Mosquito Control and Monitoring Program, and carries out comprehensive studies of each detected case. As explained in the study published in the journal Frontiers in Microbiology, monitoring for the disease and the insect that transmits it are essential for preventing the local transmission of arboviruses – the group of viruses transmitted by arthropods – helping to avoid dire impacts on public health. This is made possible by good coordination among epidemiologists, clinicians, entomologists and microbiologists.

In February 2016, the World Health Organization (WHO) declared Zika as an emerging disease threatening public health worldwide as a result of its rapid expansion and associated illnesses which include Guillain-Barré syndrome and microcephaly in newborn babies. In fact, Spain is one of the European countries with the highest risk of local transmission of Zika; in a city like Barcelona, ​​where the tiger mosquito is established and there are large fluxes of human migration, tourism and global trade, the risk continues to increase.

Since 2000, the number of people of Latin American origin residing in Spain has increased considerably. Countries including the Dominican Republic, Venezuela, Nicaragua and Colombia are those most visited by travelers originating in Barcelona, whatever the motives for the visit (to visit family, work, for tourism), and these are precisely the places where the Zika virus is endemic. With this significant movement of humans, it is only more likely that the disease will be imported.

In Spain, all cases of Zika, Chikungunya and Dengue infections are reported to the public health authorities and to the main epidemiology units. In 2016, there were 118 cases of Zika in Barcelona, ​​all of which were due to infections which occurred outside of Spain. Zika cases are classified as probable, confirmed, imported or local depending on the patient’s symptoms in addition to other clinical and socio-demographic data (age, sex, country of origin, etc.). 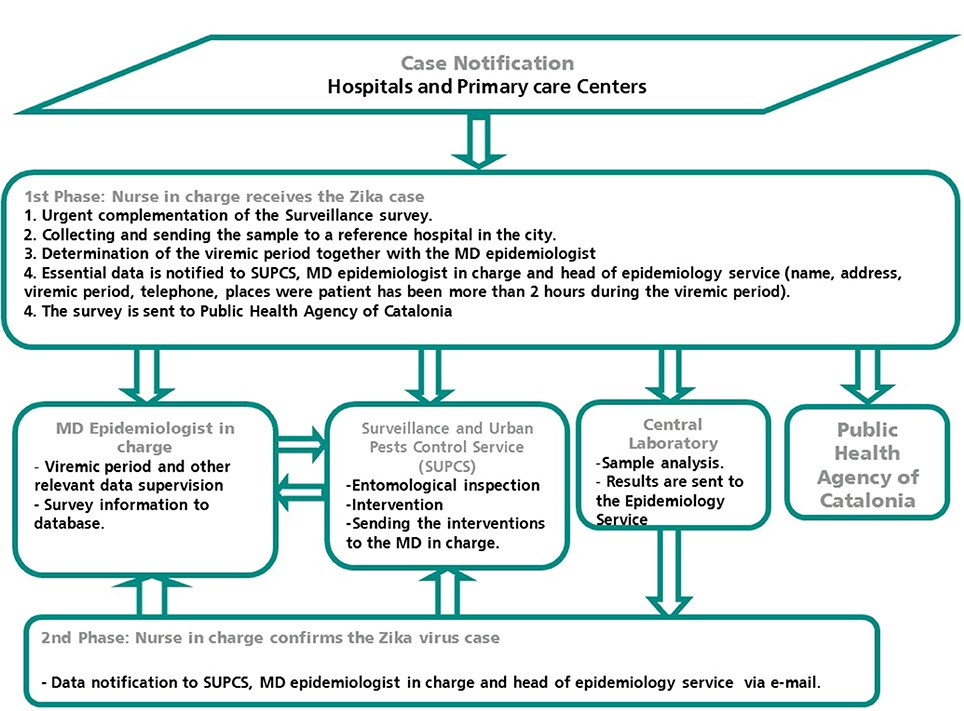 Zika is a virus that is transmitted between infected and healthy people through the bite of the yellow fever mosquito – currently not present in Spain – or the tiger mosquito. The Mediterranean is vulnerable to local transmission since the tiger mosquito is present or established in many areas. It is therefore essential to set up surveillance and prevention protocols to avoid local transmission, using individual and community prevention measures to prevent mosquito breeding and biting. In fact, the published study shows that the periods of year with the most mosquitos – April, August and September – coincide with number of imported Zika cases and therefore a greater risk of local transmission.

In the case of an infection, the city’s epidemiology service instructs the patient on the use of preventive measures to reduce additional infections. The goal is to minimize the risk of Zika transmission through mosquito bites in the area where the infected person lives. At the same time, inspections are carried out to detect if there are mosquitoes or mosquito breeding sites either in the infected person’s home or in the surrounding neighborhood. In most cases, insecticidal treatments are applied in areas with standing water in order to kill any larvae. 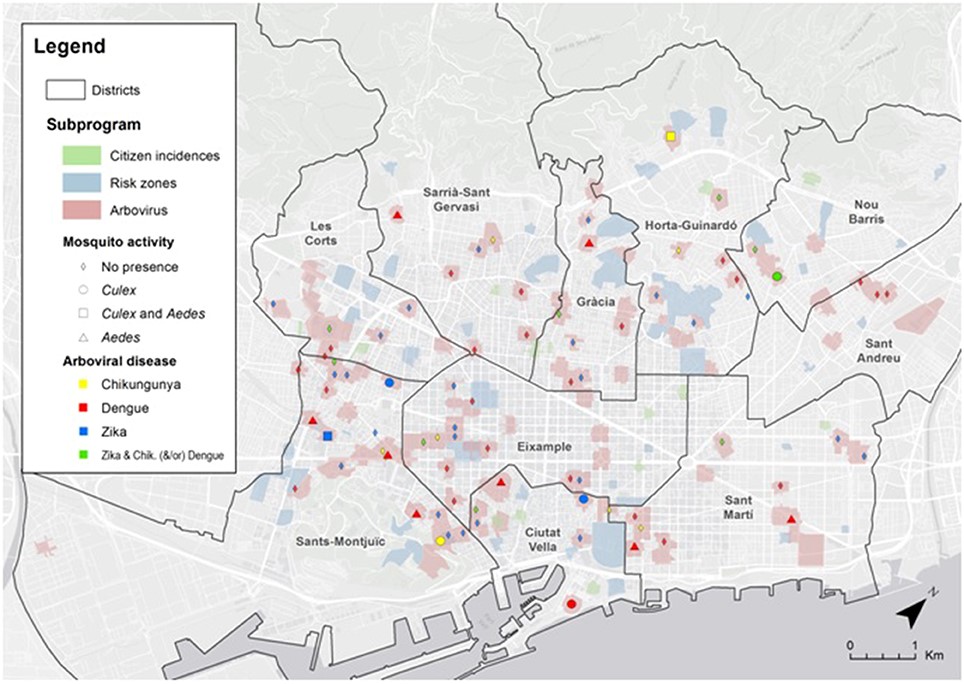 Map of the city of Barcelona, with the location of different cases of arbovirosis and entomology inspeccions. “Risk zones” (blue): monthly inspections. “Citizen incidences” (green): reports made by citizen during 2016.

In relation to such preventive measures, new technologies have sweep areas for tiger mosquito presence. Specifically, citizen participation with the Mosquito Alert app has led to the detection of breeding sites close to the homes of infected persons, and this technology has facilitated vector surveillance and control in the city. During 2016, the Barcelona Public Health Agency made entomological inspections at 19 homes of people infected by Zika, 34 public spaces, and carried out 134 follow-up and control tasks associated with cases of imported Zika.

In short, the Barcelona Arbovirus Surveillance Program is an example of how reducing the risk transmission arboviruses such as Zika should be tackled in a multidisciplinary manner. The study was carried out by the principal Spanish public health entities as well the Public Health Agency of Barcelona, ​​CIBER Epidemiology and Public Health, Lokímica Laboratories, Doñana Biological Station, The Microbiology Department of Vall de Hebron Hospital, Hospital Clínico of Barcelona, ​​ISGlobal, and the Mosquito Alert community as part of the Barcelona Zika Working Group.