Dengue is a viral disease transmitted by mosquitoes, mainly Aedes aegypti and, to a lesser extent, by the tiger mosquito (Aedes albopictus). The disease has spread rapidly in recent years to tropical and subtropical regions around the world. The risk varies between regions depending on rainfall, temperature, relative humidity and urbanization of the landscape.

Every year there are millions of cases of dengue infection in the world. It is estimated that the figure may be 390 million infected people, with up to 25,000 deaths annually. Half of the world’s population lives in regions where they are at risk of contracting it. It is most common in Southeast Asia and the western Pacific islands, but its incidence has increased rapidly in Latin America and the Caribbean.

Dengue causes a wide spectrum of diseases. Dengue causes flu-like symptoms: high fever accompanied by muscle and joint pain. Although less common, some people may develop severe dengue fever, which can lead to heavy bleeding and a sudden drop in blood pressure. First recognized in the 1950s, severe dengue has become one of the leading causes of hospitalization in affected regions.

Dengue is caused by a virus from the Flaviviridae family. There are four different serotypes: DENV-1, DENV-2, DENV-3, and DENV-4. When a person is infected with one of these types, their recovery provides them with lifelong immunity against that serotype. However, immunity against the other serotypes is temporary, to the point that a new infection with another serotype increases the risk of developing severe dengue.

Many countries are hyperendemic for all four serotypes. This means that the four serotypes coexist and co-circulate within the country. 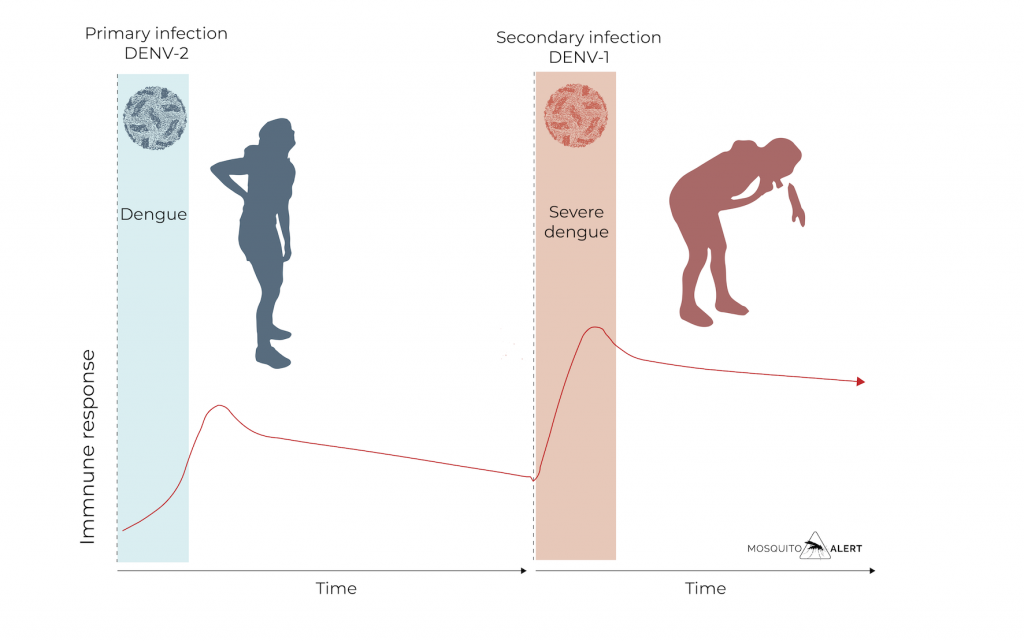 It is a serious flu-like illness that affects all ages, infants, children, and adults, but rarely causes death. Symptoms typically last two to seven days, following an incubation period of four to ten days after being bitten by an infected mosquito.

It causes a high fever of 40ºC and at least two of these symptoms:

Most people recover in about a week. In some cases, within a few days, symptoms worsen and lead to a severe form of the disease known as severe dengue.

A person can enter this critical phase several after the onset of the disease. It is when mild dengue fever is dropping, below 38ºC, that symptoms associated with severe dengue can manifest. It is a life-threatening complication, due to severe bleeding, breathing difficulties, loss of plasma, and fluid accumulation. Symptoms of this severe form of the disease are:

There is no specific treatment for dengue. You can take fever reducers and pain relievers to control the symptoms of muscle aches and pains.

In 2015, the first dengue vaccine, Dengvaxia® (CYD-TDV), was licensed. The vaccine has been shown to be effective and safe for those who have had a previous infection with the virus. The vaccine helps patients avoid developing severe dengue in a second infection. However, in people who have not previously been infected, the vaccine poses a greater risk of severe dengue from the first infection after vaccination.

The World Health Organization (WHO) recommends that only those people who have previously been infected be vaccinated to reduce their risk of severe dengue, but not the vaccination of those who have not yet suffered from the disease.

Dengue in the world

The incidence of dengue has increased dramatically in recent decades. The vast majority of cases are asymptomatic or mild, resulting in the actual number of cases unknown. Estimates suggest that there are 390 million cases each year, of which 96 million manifest clinically.

Its rapid expansion throughout the world has meant that the risk of infection exists in 129 countries, where 3.9 billion people live, although the greatest risk is concentrated in Asia.

Cases reported to the WHO have gone from half a million in 2000, to more than 2.4 million in 2010, and 4.2 million in 2019. An increase that is not only explained by its higher incidence but also by a higher recognition of the problem in the countries and, therefore, of its diagnosis and the relevance of reporting on the cases.

2019 was the year with the highest number of cases reported worldwide. The disease is endemic in 129 countries in Africa, America, Asia, the western Pacific and the eastern Mediterranean.

Dengue is not endemic on the European continent. The majority of dengue cases detected within Europe belong to travelers who have been infected in tropical and subtropical regions where dengue is endemic.

In southern Europe, where the tiger mosquito (Aedes albopictus) is present, the virus can be transmitted from a traveler who returns infected to another person. Thus, despite not being endemic on the continent, sporadic cases of local transmission have been detected since 2010 in Croatia, France and Spain.

In the world, the main transmitter of dengue is the yellow fever mosquito (Aedes aegypti). A species that is currently not present on the continent but whose presence must be continuously monitored due to its potential danger. In Madeira, where it was established years ago, it caused a dengue outbreak in 2012 with more than 2,000 people infected. The first outbreak of sustained transmission of dengue in European Union territories since the 1920s. At the beginning of the 20th century, when Aedes aegypti was present in various cities in the Mediterranean, Turkey and Greece experienced numerous outbreaks. Between 1927 and 1928 a great epidemic took place in Greece with thousands of infected and more than 1,500 deaths in Athens and its surroundings. When Aedes aegypti was eradicated from Europe, the continent went 60 years without detecting local cases of dengue, until the tiger mosquito (Aedes albopictus) became established. Thus returning the probability of local transmission to Europe.

To stay up-to-date on local cases of dengue in Europe, consult the website of the European Center for Disease Prevention and Control.

The fever that emerged from the jungle

Dengue virus (DENV) is found in two different environments. On the one hand, in urban environments, where it circulates among people through the mosquitoes Aedes aegypti and Aedes albopictus. The other is the tropical forest areas of Asia and Africa, where the virus circulates between primates and mosquitoes, known as the sylvatic cycle, from where it occasionally jumps to humans in rural regions bordering forests.

Molecular evidence suggests that the origin of the virus is in the primates of Asia, from where the four serotypes have independently jumped to humans: DENV-1, DENV-2, DENV-3 and DENV-4. The first jump from non-human primates to humans is estimated to have occurred about 1,000 years ago. The first clinical descriptions with symptoms similar to those of dengue are from the year 992 in Chinese documents. However the first well documented cases are from the outbreaks of 1779-1780. The virus was not isolated until World War II by Japanese and American researchers. The DENV-1 and DENV-2 variants were then identified. In 1954, the DENV-3 and DENV-4 serotypes were identified in Thailand and the Philippines.

The movement of troops during World War II, together with the destruction of the environment and human populations, is believed to have contributed to the spread of the virus and transmitting mosquitoes throughout Southeast Asia and the Pacific. 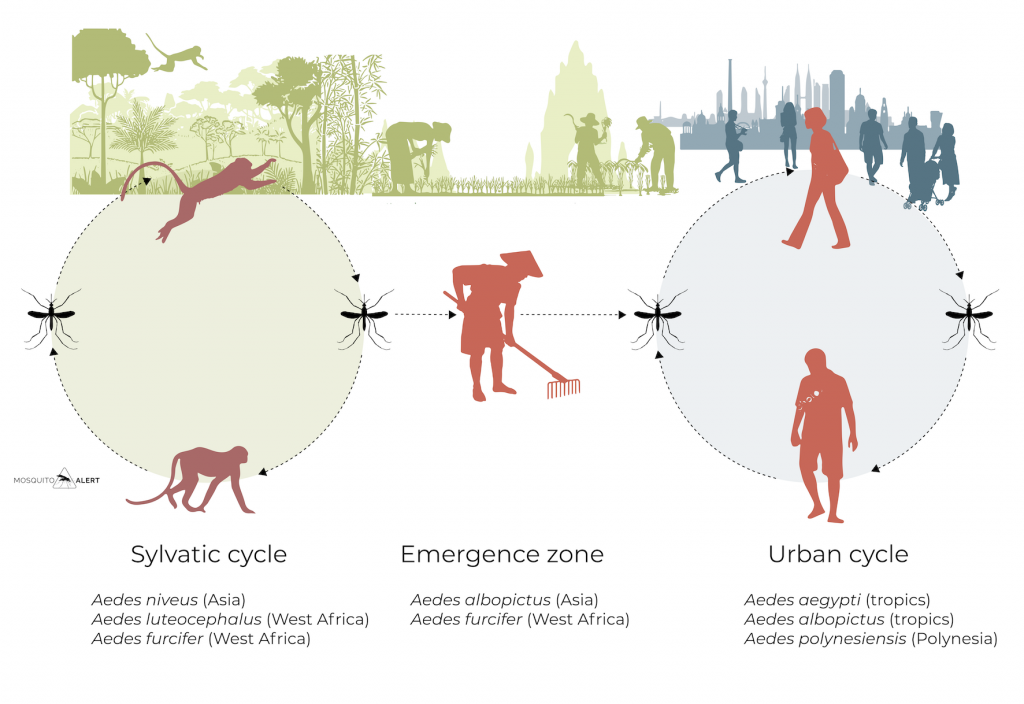 The origin of the virus is located in the tropical forests of Southeast Asia, where the virus circulates among several species of primates and different species of mosquitoes of the genus Aedes, mainly Aedes niveus. In rural areas that border forest areas, the virus has managed to jump to people due to the tiger mosquito (Aedes albopictus), and from there to cities and urban areas where transmission is maintained by Aedes aegypti and, to a lesser extent, by Aedes albopictus.

This jump from primates to people has taken place several times, giving rise to the four current serotypes, although molecular studies suggest a more complex history in which viruses have traveled both from the forest to urban areas, as well as from urban areas to forests, thus generating a great genetic diversity of the virus.

In this way, the sylvatic cycles between primates and mosquitoes have been generated outside Asia, on the African continent, but have not yet been observed in America. In African forests, the mosquitoes Aedes luteocephalus, Aedes furcifer, Aedes taylori and Aedes vittatus are involved in maintaining the cycle between primates. From West Africa the virus reached the American continent thanks to the slave trade. Like yellow fever, dengue traveled to Europe in the 18th century with slave and commercial ships coming from Africa and the New World. Mediterranean port cities suffered numerous epidemic episodes during the 19th and early 20th centuries.

Historical outbreaks, caused by the presence of only one of the serotypes, were brief and sporadic. After World War II, the increase in international trade and the expansion of urban spaces contributed to the spread of dengue throughout the world. For the first time, several serotypes coincided in a region, leading to episodes of severe dengue and the continued presence of the virus in urban ecosystems. Strong DDT campaigns to eradicate Aedes aegypti managed to halt its advance between 1947 and 1962, until the species was eliminated from 20 countries.

The ban on the use of DDT in many countries due to its enormous environmental impact, and the acceleration of globalization led to a new phase of expansion at the end of the 20th century. It was in the late 1990s that dengue transmission ceased to be concentrated in the cities, also affecting rural areas, thus becoming a ubiquitous disease in the tropics. Today, transmission of the virus remains active even among small human populations. The spread of dengue is not understood without the rapid expansion of its main transmitter: the yellow fever mosquito (Aedes aegypti). A species adapted to human environments that has become a very effective and dangerous disease vector.

Findlater A, Bogoch II. 2018. Human mobility and the Global spread of infectious diseases: a focus on air travel. Trends in Parasitology 34: 772-783

Schaffner F, Mathis A. 2014. Dengue and dengue in The Who European region: past, present, and scenarios for the future. The Lancet Infectious Diseases 14: 1271-1280