Borneo, an island shared by the administrations of Indonesia, Malaysia and Brunei, has some of the oldest tropical forest in the world. Many of them are being cut down and replaced by oil palm plantations at a breakneck pace. High biodiversity forests are replaced by monoculture lands. Complex ecosystems for simple and degraded ecosystems.

The destruction of these forests poses numerous environmental problems, from the extinction of plant and animal populations, to the rapid release of stored carbon that contributes to global warming. But there is another effect of deforestation that is rarely talked about and that is very worrying for human health: the spread of new diseases and the increase in others known as malaria or dengue.

When an outbreak of malaria broke out in the Malaysian Borneo in 2002, scientists were surprised to note that the culprit was not Plasmodium malariae. This is the main mosquito-borne parasite that used to infect the inhabitants of the region, but DNA analysis of those infected in the 2002 outbreak showed that it was Plasmodium knowlesi. The parasite usually infects and proliferates in macaques that inhabit the forests of Southeast Asia and is known as “monkey malaria”.

The destruction of ecosystems is related to the appearance of diseases

Occasional cases of this disease have been recorded in humans, but the 2002 outbreak was somewhat unusual, but not temporary. Since then, this parasite, which previously affected macaques, is the most common cause of malaria in Malaysia. A recent study conducted over four years has found that the proportion of deforested land predicts the occurrence of monkey malaria.

Fig. 1. Viruses and other pathogens are found in wild animals (1), when human activities come into contact with wild fauna, a pathogen can jump and infect domestic animals (2) and from there jump to humans (3), or directly from a wild animal to humans (1-> 3). Once it has jumped to a human it can begin to be transmitted between humans (4) and the current mobility disperses the pathogen to the different continents (5). Source: Mosquito Alert (CC-BY-NC-2.0)

The mechanisms behind this association between deforestation and malaria are unclear. Deforestation may be putting human populations more in contact with macaque populations. People move to the new open forest areas and the macaques are forced to live closer to human settlements.

Tree felling may alter microclimatic conditions and create new habitats that are better exploited by mosquitoes that often thrive on the fringes of forest areas.

75% of emerging diseases have an animal origin

The Borne malaria outbreak is an example of diseases emerging in regions that are experiencing widespread deforestation. The evidence accumulated in the last decades suggests that the more we disturb a natural habitat, the more likely we are that new diseases will appear, or existing ones will worsen.

Diseases coming out of forests

Scientists are concerned that future forest diseases such as SARS, Ebola or COVID-19 may emerge from forest degradation, all of which emerged from wild animals (Fig. 1).

Mosquitoes are not the only animals that transmit pathogens from the wild to human populations. Bats, primates, and even snails can have diseases that at one point can jump on humans. Transmission dynamics can change as we alter their natural habitats.

Throughout history, many pathogens have emerged from forests with great diversity. Zika, as a disease for humans, originated in the forests of Uganda in the 1940s. A few years ago, different South American countries suffered a great Zika epidemic. Dengue, Chikungunya, yellow fever, or West Nile virus also appeared in the forests of Africa before expanding and establishing themselves on other continents.

Fig. 2. The disturbance of forest environments breaks down the barriers between wildlife diseases and human populations. Source: Mosquito Alert (CC-BY-NC-2.0)

A shared health with ecosystems

For a long time, the trend was to consider highly diverse tropical forests as a threat to human health. It was understood that, in its interior, the great wealth of wild species harbored an endless number of viruses and pathogens that would sooner or later give rise to new diseases, as had happened with yellow fever, dengue, HIV or Ebola.

Today the vision is different. It is the human destruction of biodiversity that creates the conditions for new viruses and diseases to emerge (Fig. 2). Deforestation, the opening of new roads, mining and hunting are activities that are implicated in the triggering of different epidemics.

60% of current infectious diseases have an animal origin

As our activities increase, we reach pristine places, alter them, and create environments where viruses and other pathogens can be transmitted more easily. Humans create the conditions for diseases to spread. Their activities reduce the natural barriers that exist between animals that may have a pathogen and human populations.

How does biodiversity affect the transmission of a pathogen?

The results accumulated in recent years show that high biodiversity tends to reduce the transmission of pathogens, and thereby reduces the risk of disease, both for human populations and for livestock and their crops.

These effects of biodiversity on the transmission of pathogens are explained for several reasons. The first of them, because most pathogens appear to be generalists, that is, they can infect a large number of different organisms. However, these organisms often differ in their susceptibility to infection by the pathogen and, more importantly, in their potential to transmit the infection to other individuals or organisms.

Third, in many cases, the organisms most likely to acquire and transmit infections (which in epidemiology are known as reservoir hosts) are abundant, generalized species, and resistant to the disturbances of ecosystems caused by human activities. Consequently, these organisms tend to persist when diversity is reduced. Faced with the destruction of a diverse ecosystem, the number of individuals of these organisms that are large transmitters of the pathogen increases compared to the rest of the species that are more sensitive to habitat destruction.

Consequently, species living in highly diverse ecological communities tend to dilute the effect of reservoir hosts. The pathogen can jump to other species that are barely infected or are unable to transmit it, acting as a buffer. This is what is known as the “dilution effect” of biodiversity (Fig. 3). 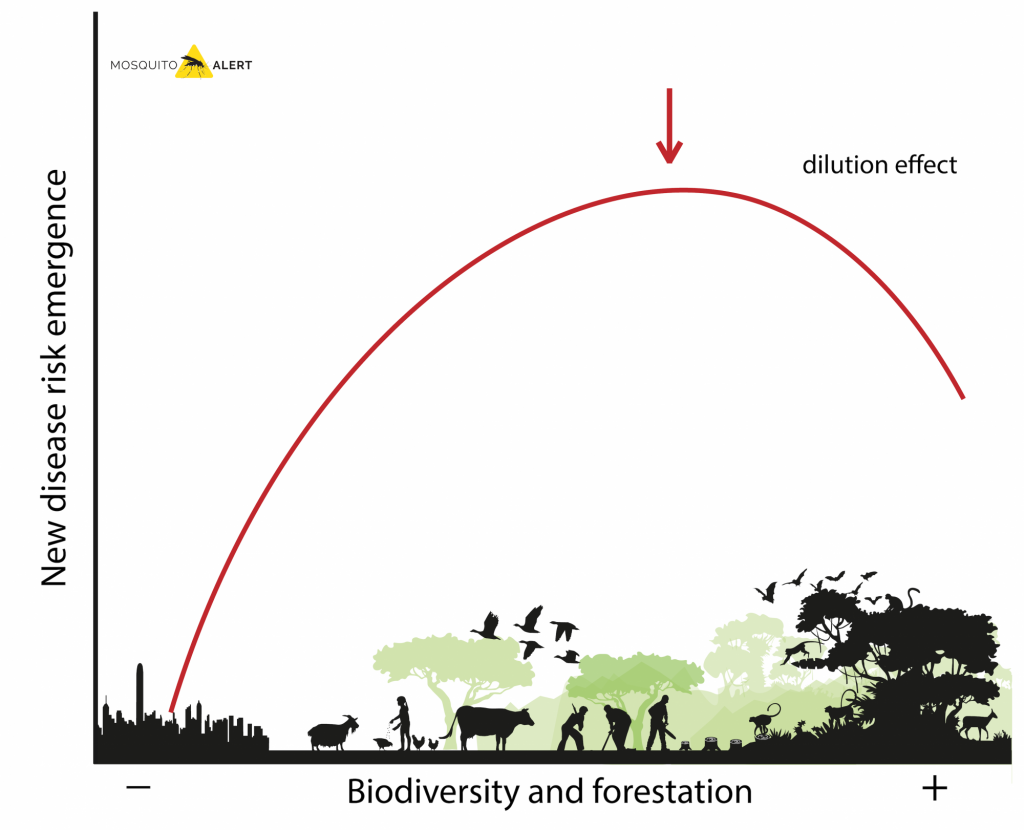 On the contrary, simplified ecological systems have an amplifying effect. In altered environments, the species that survive are usually the most transmitting diseases.

Natural ecosystems pose threats, it is true, but it is human activities that increase the risk and danger of a disease emerging. More knowledge is needed on how to manage ecosystems to mitigate the occurrence of diseases and outbreaks like that of Borneo. Today, diseases can travel further and faster, as we have seen with COVID-19, so there is a greater need for knowledge to develop mitigation plans in different scenarios.

Kilpatrick AM, Salkeld DJ, Titcomb G, Hahn MB. 2017. Conservation of biodiversity as a strategy for improving human health and well-being. Philosophical Transactions of the Royal Society B 372: 20160131