The yellow fever mosquito (Aedes aegypti) is known throughout the world for inhabiting urban areas, biting humans and thereby spreading diseases such as dengue, Zika, chikungunya and the yellow fever that gives it its name. The WHO estimates that this species causes 50 million infections and 25,000 deaths a year. Studies carried out in America and Asia found that 95% of the blood consumed by the mosquito is human, demonstrating its preference for us.

However, in Africa, where the mosquito originates from, most of the populations of this mosquito do not have a preference for humans, but for other animals, mainly mammals such as primates and rodents. But this trend could change in the coming years, a new study warns. The increasing urbanization that the continent is experiencing and climate change, will favor the spread of mosquitoes with a preference for humans. And this will increase your ability to spread disease.

The yellow fever mosquito is native to Africa, where most of its populations have no preference for biting humans, unlike their populations in America and Asia

To reach these conclusions, the study authors analyzed the preference of various populations of African Aedes aegypti and the climatic and environmental variables that could explain the differences between them. They collected eggs from 27 locations in sub-Saharan Africa (Fig. 1), which varied in their climatic conditions, ranging from the semi-arid regions of the Sahel, to seasonal forests and rain forests. The other variable they analyzed was the density of the human population present in the area. The mosquitoes were bred in a laboratory where their biting preference was studied, exposing them to human odors and odors from other non-human animals at the same time. In this way they could observe which of them they were heading and calculate the preference of the different populations. 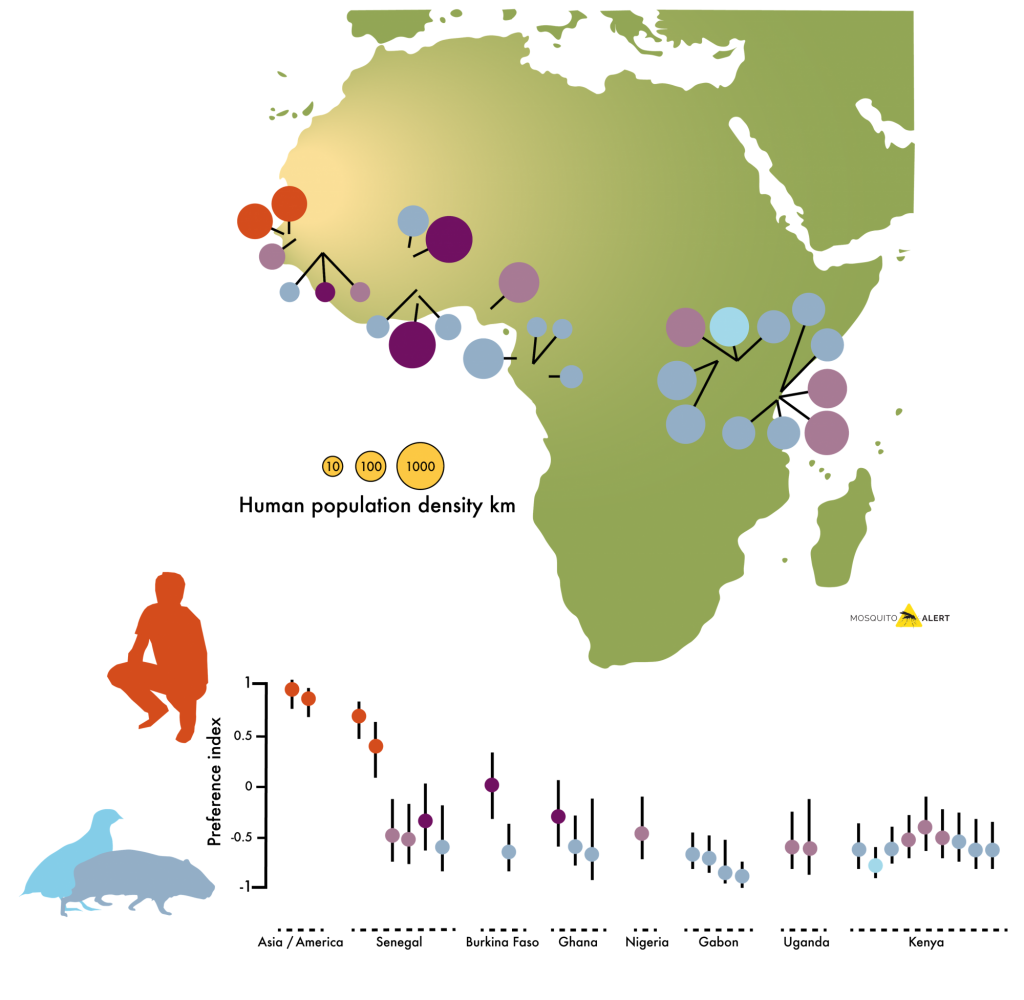 Fig. 1. Location of the populations used in the study. The size of the circle represents the density of human population present in the area. The color the mosquito’s preference for biting humans (reddish) or other animals (bluish). The figure below shows the preference index obtained by giving them a choice between humans or other animals for each of the populations. The point is the mean and the bar is the 95% confidence interval. Source: Mosquito Alert CC-BY from the original by Rose et al. 2020. bioRxiv 939041

Most of the populations preferred the smell of the other animals (blue), some did not show preference for one or the other (violets), and only a few of them showed a clear predilection for human smell (red) (Fig. 1) . The taste for human blood was present in those regions with a higher human density. Suggesting that when the human population is large in an area, the most favored mosquitoes are those that tend to feed on people’s blood.

Another factor that explained the distribution of mosquitoes with this preference for human odor was the climate. These mosquitoes are more abundant in dry regions. In them the natural habitats where they usually deposit eggs, tree holes or concavities in the rocks with rainwater, are scarce. Instead, human containers and tanks proliferate to store water. Humans provide mosquitoes with places to breed in environments that are initially unfavorable to them.

Both morphology and genetics show that mosquitoes with a preference for humans, which today have invaded the American and Asian continents, are related to the populations of the Sahel, the region that makes the transition between the Sahara desert to the north, and the savannah to the south. The term of Arab origin literally means “coast”, in reference to the appearance of the vegetation delimiting the sandy sea of ​​the Sahara. The yellow fever mosquito populations that inhabit northern Senegal, in addition to showing a preference for humans, is the one that is genetically related to the mosquitoes that we find today in America and Asia.

The yellow fever mosquito tamed itself

In these semi-arid environments, mosquitoes depend on human habitats to reproduce. Human-made tanks and water drums allow them to inhabit a region where they find few natural habitats to reproduce. Being forced to live together with human populations, where the most abundant prey is humans, natural selection ended up generating mosquito populations with a preference for feeding on humans. Individuals with the mutations in sensory systems that determine their preference for human odors are the most abundant in these populations.

The combination of dry seasons and dependence on humanized spaces has not only been important in the evolution of the yellow fever mosquito, but has also shaped the evolution of Anopheles mosquitoes that transmit malaria in Africa.

In Africa, the climate and density of human populations are changing, and it is feared that the change in rainfall and the increase in urbanized areas will favor mosquitoes that have adapted to live and feed on humans. That would mean a considerable increase in human populations on the continent exposed to the diseases that this species can transmit.