There are several factors that make one person more attractive to mosquitoes than another, but body odors play a big role. A recent study has shown that people infected with dengue or Zika viruses secrete a chemical that makes them more attractive to mosquitoes. That means viruses are capable of altering our body odors so that we are more likely to be bitten by a mosquito and spread the virus to other people.

The phenomenon was described for malaria a year ago, when it was described that the pathogen of the disease was able to change the smell of infected people and be more attractive to mosquitoes, which has led scientists to question whether something similar it could happen with dengue or Zika.

Acetophenone: the fatal attraction of mosquitoes

To show that the viruses alter the body odors of infected hosts, the researchers conducted several experiments. In the first of them, they offered the mosquitoes two types of mice: some infected with the dengue or Zika virus, and others uninfected. Infected mice received twice as many hits and bites as uninfected animals (Fig. 1).

They then analyzed the molecular compounds found in the skin of the infected and uninfected mice and people, to identify the compounds that were most common in the infected subjects.

One by one, they tested the different individualized compounds, rubbing them on the backs of uninfected mice or on the hands of uninfected volunteers. Of the entire set of substances tested, acetophenone turned out to be the compound that most attracted mosquitoes. 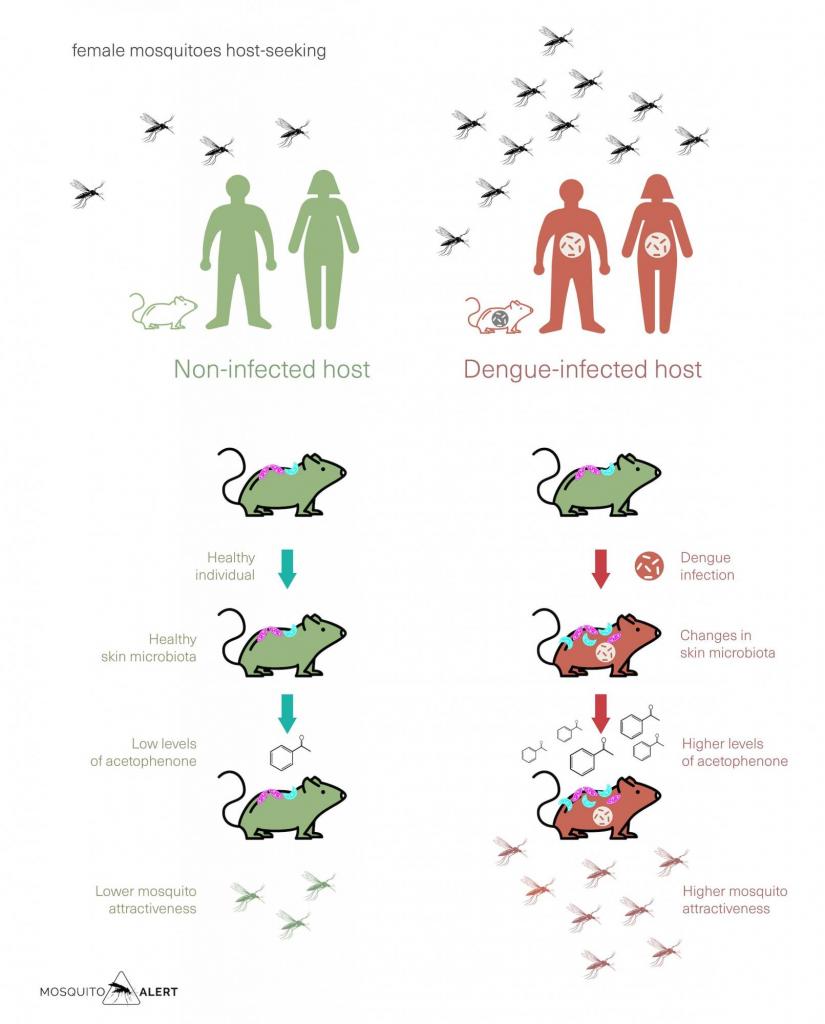 Fig. 1. Diagram showing why humans and mice infected with dengue or Zika attract more mosquitoes helping to spread the virus. Infected hosts (in red) have their skin microbiota altered, thus changing their body odour, mainly experiencing an increase in acatophenones, the chemical compound that has been shown to be attractive to mosquitoes. Source: Mosquito Alert CC-BY from original figures by Zhang et al. 2022. Cell 185:2510-252

Acetophenone, also present in some fruits and cheeses, is normally produced by bacteria on the skin, both human and mouse, but its amount is usually controlled by antimicrobial peptides present in the skin. Infected people appear to produce fewer of these peptides, thereby increasing levels of acetophenone that is so attractive to mosquitoes (Fig. 1). By making the infected mouse or person more attractive to mosquitoes, viruses increase their chances of being able to jump to new hosts.

The work has allowed the researchers to verify that by giving mice a common medicine to treat acne, which increases the production of antimicrobial peptides, the mosquitoes stopped showing a preference for them. Although more study is needed, there is hope that treatment with the acne drug may deter mosquitoes from feeding on infected people and spreading the virus. At the same time, identifying the chemical compounds that are most attractive to mosquitoes could lead to better baits and traps for these insects.