10 years after its first detection, the tiger mosquito is already established and expanding along the Spanish Mediterranean coast. A study has revealed the necessity to coordinate urgent control measures on a large scale in order to avoid further public health issues. To this end, public participation has been recognized as a helpful resource for fighting against the invader.

Distribution of tiger mosquito from 2004 to 2014. Source: Atlas of Science

The study, published in the journal Parasites & Vectors, uses data from the period 2004-2014 and demonstrates that at present the tiger mosquito (Aedes albopictus) has already colonized most of the Spanish Mediterranean coast. Currently the source of the tiger mosquito arrival to Spain remains unknown. In 1999 it was first detected in the north of France, and in the next seven years swept through the Mediterranean coast of France. In that moment it was considered that the risk of entry from the neighboring country was high and various inspections were activated to detect the species. In 2004 the residents of Sant Cugat del Valles (near Barcelona) warned that they had detected the tiger mosquito population, without knowing where the tiger mosquito came from.

To date, Catalonia is by far the region experiencing the greatest impact: of the 470 townships where the mosquito had been detected up to the year 2014, 372 of these are within Catalonia, or around 80%. Over the last 11 years the mosquito has vastly expanded its range in an accelerated manner, in Catalonia as well as along the rest of the Spanish Mediterranean coast. 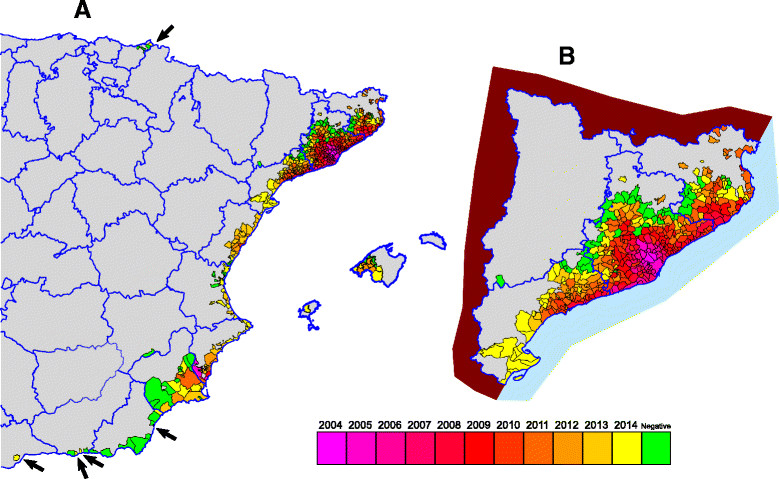 Historical record of townships with confirmed tiger mosquito presence (2004-2014). (A) Overview. (B) Detail in Catalonia. Arrows: areas with isolated populations of tiger mosquito; Green: no tiger mosquito up to 2014; Grey: area not studied.

With such precedents, it is possible that there are other areas where the mosquito has become established unnoticed, especially when taking into account the lack of country-level monitoring programs, making it difficult to keep watch on the invasion. The study – undertaken by a group of scientists from Spanish institutions and centres, and led by Francisco Collantes of the Department of Zoology and Physical Anthropology of the University of Murcia— highlights the need for clarifying the legislation and practice of control and vigilance, the promotion of large-scale initiatives to coordinate vigilance strategies, and the adoption of shared standardized methodologies. To date, in most cases different tiger mosquito detection methods have been used, resulting in less robust results.

Any kind of control and vigilance effort is needed to fight against this insect. Rather than addressing its nature as an invasive species and negative effects on the economy and quality of life, the study focuses on effects for public health. The tiger mosquito has a diurnal behavior and has a special attraction towards humans, and for that reason it is quite common that the females’ diet is restricted to practically only our blood. Nevertheless, they also bite other vertebrates, depending on availability, and this could be one route of disease transmission between animals and people. Though in many cases the tiger mosquito’s role as a vector of diseases is not clear, it has been demonstrated to be a vector of dengue and chikunguna. Nonetheless, in 2013 the Centre for Coordination of Alerts and Health Emergencies rated the risk of dengue transmission risk in Spain as low. In reality, to date the only impact of Aedes albopictus on Spanish public health is the nuisance of its bites. 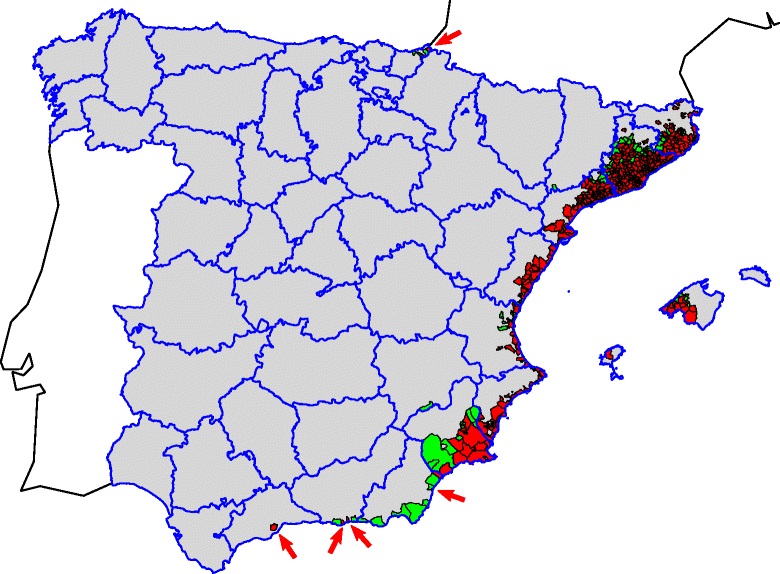 Distribution of the tiger mosquito (Aedes albopictus) in Spain up to 2014: Red: confirmed at the township level; Green: not found; Gris: area not studied. Arrows: areas with isolated populations of tiger mosquito.

For this fight, new possibilities for complementary vigilance have emerged. These are based on citizen observation, as is currently done in other European countries. The project Mosquito Alert is recognized as a “change in the way in which we address this problem, since including laypeople and citizens in [the tiger mosquito’s] detection and by working together we don’t only improve the amount of information available, but we also promote the use of simple control measures in our houses and neighborhoods,” says Aitana Oltra, scientific coordinator of the project. Using a mobile telephone application, it is possible to upload geolocated images showing the mosquito, later verified by experts coordinated by Roger Eritja, entomologist from the Baix Llobregat Mosquito Control Service and Mosquito Alert team member and one of the authors of the study. The results of this citizen science initiative have already beared fruit: thanks to citizen use of the

Mosquito Alert application, new populations of the tiger mosquito have been detected in Spain, for instance in the province of Málaga. This kind of vigilance is complementary to other strategies for prevention and control. In cases in which the nuisances caused by the mosquito are so evident, citizen science should be used as a powerful weapon against the expansion and proliferation of Aedes albopictus.