Last week many media reported that GM mosquitoes were going to be released in the United States. The experiment proposes introducing 150,000 genetically modified mosquitoes to combat the yellow fever mosquito in the Florida Keys. In reality, it is not the first time that the technology firm Oxitec has carried out an experiment of this type in the field, previously the technique has been tested in Brazil, Panama, Malaysia and the Cayman Islands. The news is that it is the first time that modified mosquitoes have been released in the United States and the controversy, which is not small, that has been generated among the citizens of the affected area.

The doubts and complaints of the neighbors are understandable. Mosquitoes are a sensitive subject, especially if it is a mosquito capable of transmitting diseases such as the yellow fever mosquito. In fact, it is estimated that Aedes aegypti represents no more than 4% of the mosquitoes in the Florida Keys and yet it is the main cause of mosquito-borne diseases in the area. Numbers that justify action against the species, but at the same time justify people’s fear of knowing that thousands of mosquitoes of the species to fight will be added to the region. How can a population be eliminated by incorporating individuals? The answer lies in genetics.

The first thing is to clarify that what is released are male mosquitoes, that is, individuals that do not bite. Remember that only females feed on blood. Thus, the thousands of mosquitoes released in the Florida Keys in principle pose neither a nuisance nor a health risk for the inhabitants. But these males also have a peculiarity: they have been modified. Animals carry a gene that, when passed on to their offspring, kills female offspring in the early larval stages, but not male offspring. Male offspring will continue to carry the gene for modified mosquitoes and pass it back on to their offspring. The idea is that the gene kills females generation after generation. The process will be faster each time because there will be more males carrying the gene, until a point is reached when the population is very reduced. With hardly any females that can transmit the disease.

Distorting the laws of Mendelian inheritance

The process is made possible by what is called “gene drive”. This consists of introducing genetically modified organisms designed to propagate a chosen trait, in this case a gene that kills females during development. Gene drives involves distorting inheritance in favor of the gene that we are interested in being transmitted. It consists of breaking the probability that a baby has a 50% of inheriting any gene from any of the parents. Gene drives manages to raise the probability to 80-90%, thus guaranteeing that a new introduced gene spreads in the population generation after generation until the majority of individuals possess it (Fig. 1). 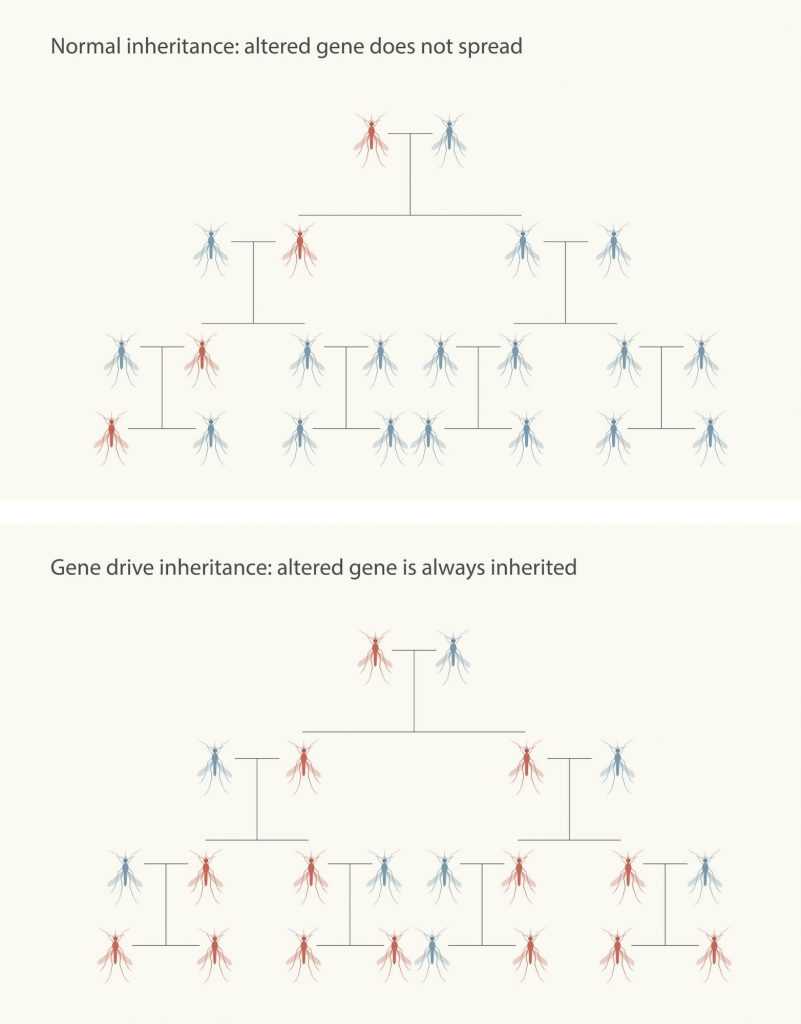 Fig. 1. The biotechnology of genetic drive breaks the rules of Mendelian inheritance. In a normal situation, the introduced gene (in red) would be inherited by only 50% of the offspring, gradually disappearing from the population if it does not present any evolutionary advantage, however. The tools of directed genetics achieve that this probability of inheritance reaches levels of 80-90%, allowing the new gene to spread through the population. Source: Mosquito Alert CC-BY

The idea of ​​creating such a gene drive to modify the genetics of an entire population emerged more than half a century ago to combat some insect pests, but it has only become a reality in the last decade. This has been thanks to the discovery of CRISPR/Cas9. A tool that has revolutionized genetic engineering.

The use of CRISPR/Cas9 was born from the study of the defense system of bacteria against viruses (yes, the war against viruses also takes place in the microscopic world). CRISPR is the mechanism that allows bacteria to cut the DNA of the attacking virus and incorporate the viral sequence into their own genetic code. This “cut and paste” allows bacteria to have a molecular memory of the virus that has attacked them, being able to identify the attack immediately in the future. What bacteria use to introduce DNA cuts into viral genomes to prevent infection has been used by scientists to cut the DNA of any organism and edit their genes with great precision. To do this, a guide RNA (RNAg) must be added to the CRISPR/Cas9 that leads the scissors to the place where the new gene is to be added. If a self-replication system is designed, once this molecular machinery has been introduced into a DNA chain, it will self-copy onto the other chromosome after reproduction, making the probability that the gene will be inherited is practically 100% and will spread throughout the entire population. wild population.

Fig. 2. Scheme of how gene drive works, in which the CRISPR/Cas9 machinery, the guide RNA (RNAg) and the modified gene are introduced through a plasmid into the chromosome of male mosquitoes. First the RNAg identifies the position, cas9 cuts, opens the DNA strand and copies the entire package, including the gene of interest. All these elements are replicated on all chromosomes, even after reproduction, copying from the chromosome inherited from the male to that of the female. Source: Mosquito Alert CC-BY

The methodology can be a revolution in the control of mosquitoes and their diseases. An alternative system to insecticides, whose widespread use ends up generating resistance in the treated populations. However, the technique, like any new innovation, still has several questions to answer. The medium and long-term stability that the introduced genes will have is not known. In previous experiments, mutations in the gene have been identified but without affecting its functionality, but that does not guarantee that mutations may appear in the future that provide these individuals with certain advantages. And if trying to eliminate them we give rise to more resistant mosquitoes? What happens to the rest of the organisms? Can the new gene inadvertently pass to other species and affect them? What will happen in the ecosystem if we manage to extinguish a species of mosquito? Will another bloom in its place? Will it affect the biology of other species? Interactions within an ecosystem are multiple and complex, the disappearance of one species can generate a chain reaction that affects others. Do we know what the ecological role of mosquitoes is?

Gene drive is very promising. A tool that could improve the lives of millions of people living in regions where dengue, chikungunya, Zika or malaria are endemic diseases. However, releasing genetically modified animals that can reproduce uncontrollably can be like opening Pandora’s box: once their ills have gone out into the world they can no longer be locked up. This is why these controlled experiments are so important. The results obtained from them may mark the future of our historic war with mosquitoes, although the ethical aspects of this new biotechnology remain to be resolved.