This mosquito is native to East Asia, mainly in Japan, Korea, Taiwan, and Southeast China. In recent years, human activity has favored its expansion through the international tire trade, colonizing part of North America and Europe.

It reached this last continent in 2000, when it was first located in Normandy. Later in 2002 it appeared in Belgium, also introduced by the used tire trade. Since then it has expanded to different European countries, such as Germany, Austria, Belgium, Croatia, Slovenia, Spain, France, Hungary, Italy, the Netherlands, Russia and Switzerland.

It is a species adapted to colder and more seasonal climates than the tiger mosquito or the yellow fever mosquito, hence its expansion throughout central Europe. 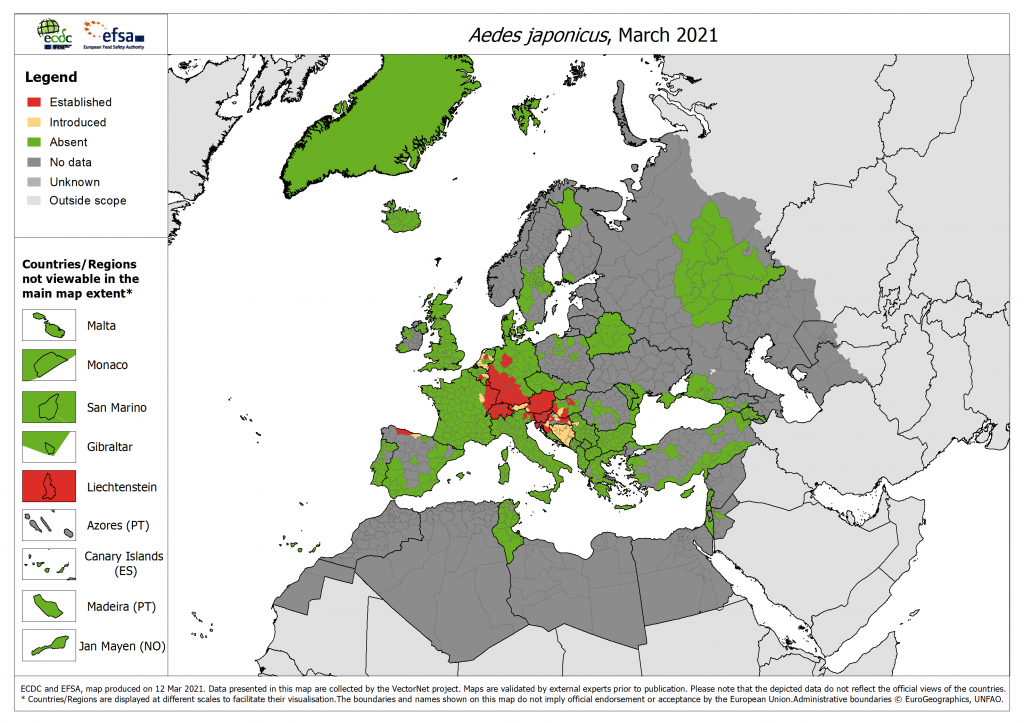 Distribution of the East Asian bush mosquito in Europe, update May 2021. Source: European Centre for Disease Prevention and Control
Go to the Mosquito Alert map

What does the East Asian bush mosquito look like?

It is a somewhat larger mosquito than the tiger mosquito or the yellow fever mosquito, and is lighter in color than these. It is characterized by having several lines on the thorax formed by golden scales (1). 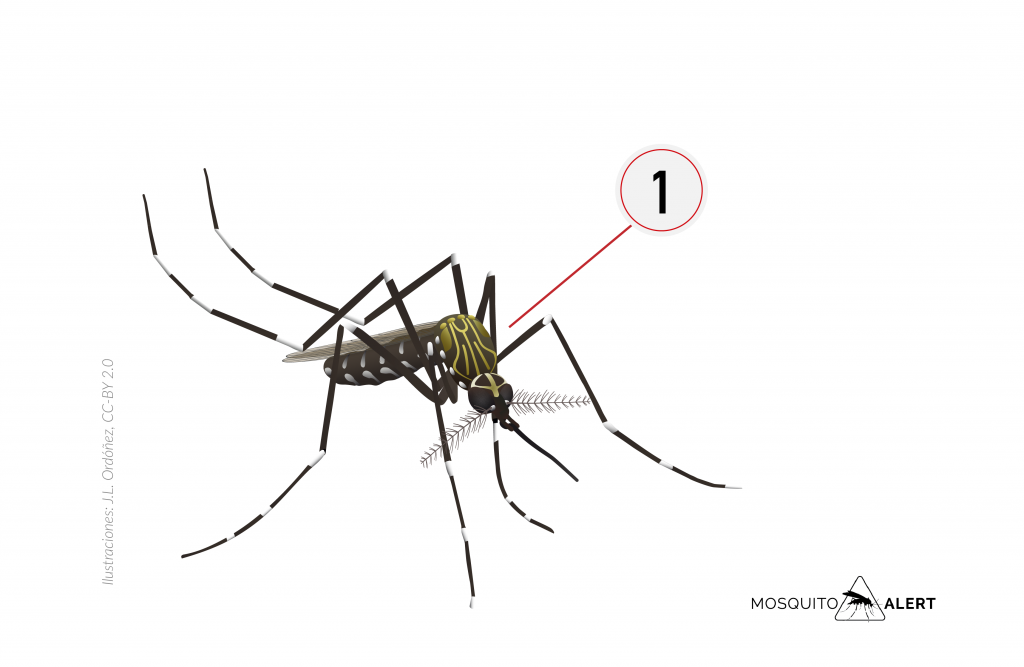 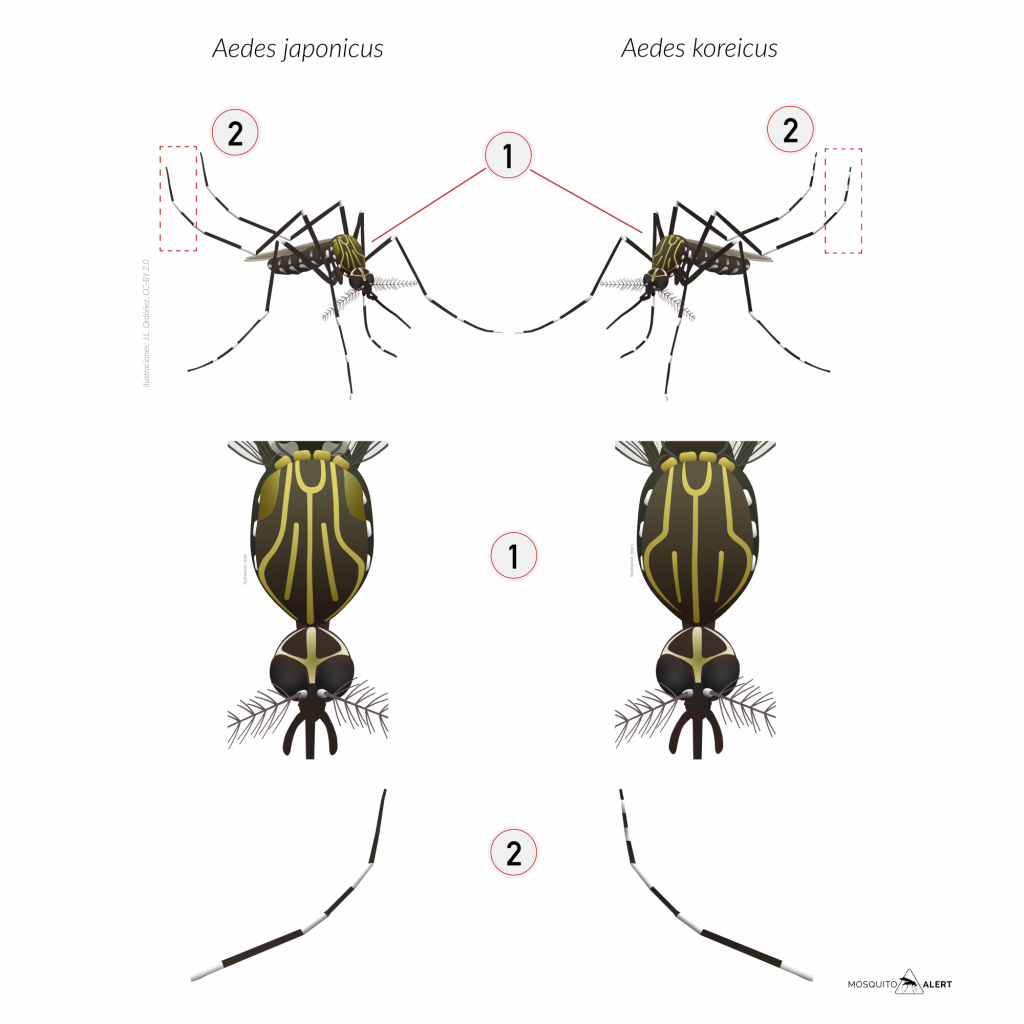 Its activity is daily and twilight, hours in which its bites are concentrated. It has a preference for outdoor spaces, although in Germany and Spain individuals have been captured inside houses.

It is not a mosquito as urban as others, being common in areas of deciduous forest in rural areas. The species can breed in flooded forest spaces, in cattle watering holes, puddles, water-filled rock holes, buckets, tires, and any other utensils that contain water.

They like to breed in environments sheltered in the shade, and in the larval phase it does not support those places where the water exceeds 30ºC.

It is a mosquito capable of flying long distances in search of hosts or breeding grounds.

Help us to study its expansion with your observations!

Only the females bite, as in all mosquitoes, to obtain the necessary proteins for the development of their eggs.

It bites during the hours it is active, that is, during the day and at sunset. It is an aggressive mosquito that not only feeds on human blood but other mammals, in the United States it has been seen that its main host is the white-tailed deer, followed by humans. In Spain, its larval preference for watering holes and the paucity of reports of attacks on ranchers suggests that it mainly bites cattle.

Although this species is still largely unknown, its bite can be as bothersome as that of the tiger mosquito.

The season of activity of this mosquito is earlier than that of the tiger mosquito, as corresponds to a species with a more continental climate. In Europe it begins in May and can last until October, its reproduction can decline in the hottest months of summer, July and August, due to an excess of temperature, being more abundant in early summer or early autumn.

It is far from having as much sanitary relevance as the tiger mosquito and the yellow fever mosquito. The virus that transmits most efficiently is West Nile fever. In the laboratory it has been shown that it is capable of becoming infected with the Japanese encephalitis virus and the La Crosse virus, and to an even lesser level, also with the dengue and chikungunya viruses. Its ability to transmit these viruses under natural conditions is not yet known, but since there have been no episodes where it has been implicated, it is very low or null in practice.

Its tendency to feed on other mammals makes it a possible disease-transmitting bridge between animals and humans. Mosquitoes have been found in the United States infected with the La Crosse virus.

Mosquitoes on the golf course

Participate with the app to improve our knowledge of the species! 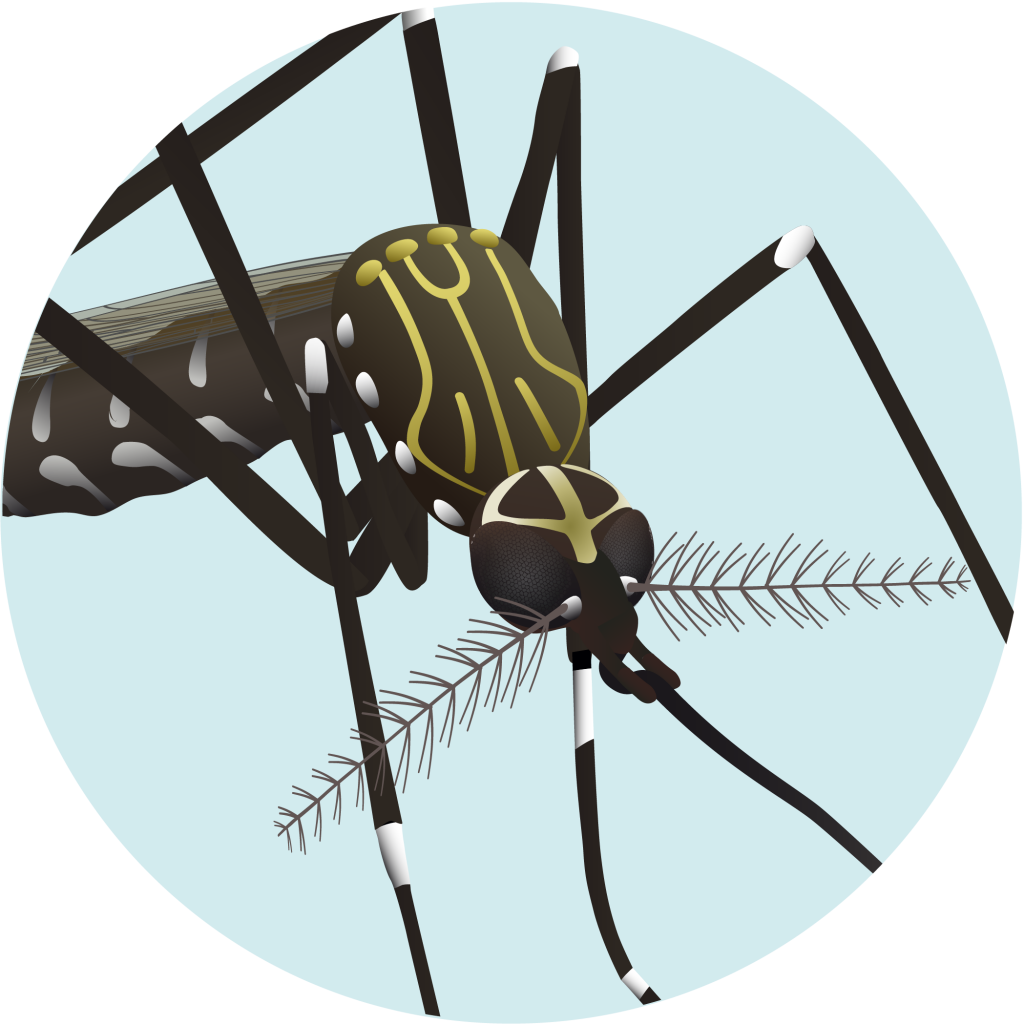