Jurassic Park and its mosquitoes

Jurassic Park and its mosquitoes

If there is a famous fictional mosquito, that is the Jurassic Park mosquito. The plot of the film is well known to all, a team of scientists manages to bring dinosaurs back to life from DNA recovered from prehistoric mosquitoes. The researchers manage to extract blood from the “last supper” of one of the mosquitoes trapped millions of years ago in amber, a blood sample that belonged to a dinosaur (Fig. 1), from which they manage to sequence its genome to clone one of the dinosaurs that will later eat the researchers themselves.

The origin of all the tragedy written by Michael Crichton lies in a mosquito. We know that genetic material does not survive so many years as to make the Jurassic Park story a reality. And although molecular techniques have improved and managed to recover ancient DNA in ways we couldn’t even imagine a few years ago, until we obtained the complete genome of a horse that lived 700,000 years ago, the dream of seeing dinosaurs walk again continues. being that: a dream.

Fig. 1. The plot of the book and the films that followed revolves around the possibility of recovering the DNA of a dinosaur from a mosquito that previously had bitten one of them. Source: Mosquito Alert CC-BY 2.0

If one day molecular techniques made it possible, the research team that would carry it out should hire an entomologist to avoid the mistakes made by the Jurassic Park film teams. After all, without a mosquito there is no dinosaur. Or rather, without dinosaur blood inside the mosquito there is no dinosaur. And it is that the mosquito that appears in the film when they draw the blood of the dinosaur is one of the few mosquitoes that do not bite and do not feed on blood.

The mosquito used in the movie Jurassic Park is one that does not feed on blood, it could never contain dinosaur DNA in its body

Not all mosquitoes feed on blood

The mosquito on the scene belongs to the genus Toxorhynchites, the largest mosquitoes known, hence its common name “elephant mosquito”, and also one of the mosquitoes that are not blood-sucking (that is, they do not feed on blood) . In the film frame you can see the long proboscis formed by its mouthparts, but also that it is bent downwards (Fig. 2). This angle helps these mosquitoes feed on the nectar of the flowers, not through the skin of any animal. 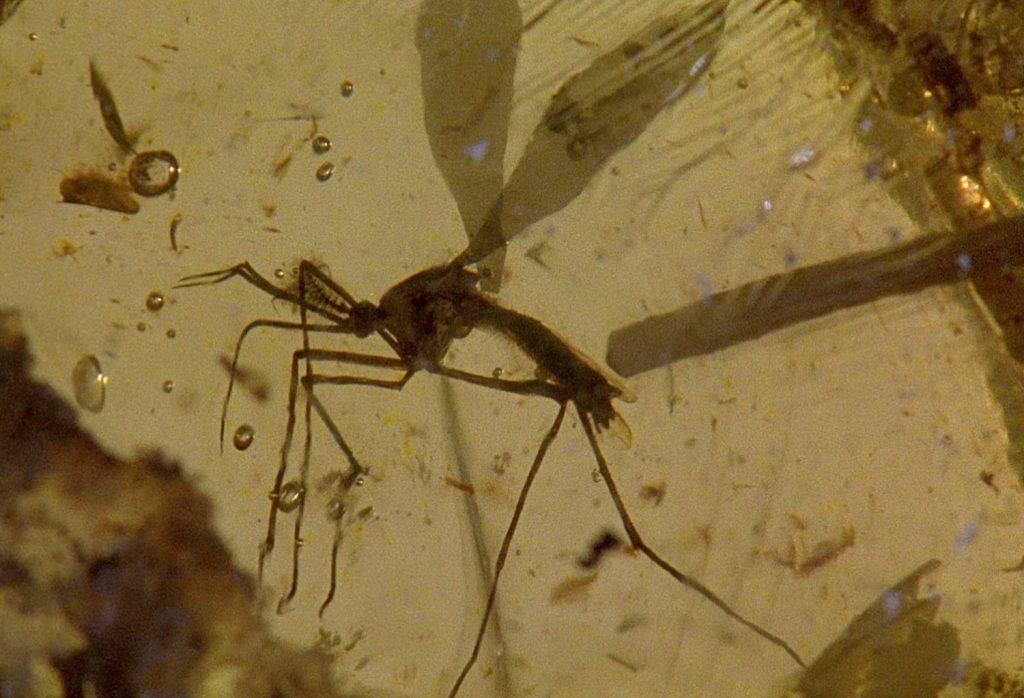 Fig. 2. Frame from Jurassic Park (1993) where the mosquito is seen, to which they will extract the blood from the abdomen. Something impossible since the mosquito is of the genus Toxorhynchites, note its downward bent proboscis that feeds on flowers. Furthermore the individual is a male, appreciate his feathered antennae. Males, whatever their species, never sting.

But not only was the species wrong, but the individual made the failure even worse. The mosquito is a male, it is recognized by its feathered antennae that allows them to detect females when mating. Males of any species feed on blood, ever. Only females do. Well, in the species used in the movie, neither the females.

Not everything that looks like a mosquito is a mosquito

In 1993 they made that mistake, but in 2014 with the premiere of Jurassic World, the advice of some entomologists failed them again. Once again a mosquito trapped in amber allows new dinosaurs to be brought back to life, but this time the insect from which they obtain DNA is not even a mosquito. It is a typula or crane fly, that although their confusion with mosquitoes is common, they have nothing to do with them, and they do not bite or feed on blood (Fig. 3). In fact, many of them even feed in their adult phase. So we could hardly find dinosaur blood in his abdomen.

Fig. 3. Still from the Jurassic World movie (2014) of one of the “mosquitoes” from which DNA is recovered to bring dinosaurs back to life. If you don’t see the proboscis with the mosquitoes’ own stylet, it is because it is not a mosquito, but a harmless crane fly.

If the people in charge of the film had sent a photo of the “mosquito” they were going to use in the film to the Mosquito Alert app, the team of entomologists would have notified them that it was not a mosquito, thus avoiding the error. The Mosquito Alert participants would not have done so. For once mosquitoes are the protagonists of a story, and it turns out that the individuals used are not mosquitoes.