Artificial light allows us to illuminate our homes and cities at night. It allows us to extend our activities beyond sunset. We know that artificial light, when bright enough, slows down our biological rhythms. Artificial light causes us to delay going to sleep and the quality of sleep may be affected. People are not the only ones affected. Almost all living things have adapted to the cycles of day and night that originate with the rotation of the Earth. That includes mosquitoes.

The effects vary between species of mosquitoes. For example, the yellow fever mosquito (Aedes aegypti) increases its biting rate when there are 50 lux incandescent lights in the environment. Common house mosquitoes (Culex pipiens) in areas with artificial lights lengthen their seasonality: they bite and reproduce later in the mosquito season, thus extending the period of disease risk in urban environments (Fig. 1). Artificial light reduces diapause in the tiger mosquito (Aedes albopictus) by 40%, also lengthening its period of activity. In Anopheles mosquitoes, implicated in malaria transmission, the effects seem to be opposite, especially when ultraviolet light is present: artificial light suppresses their activity. 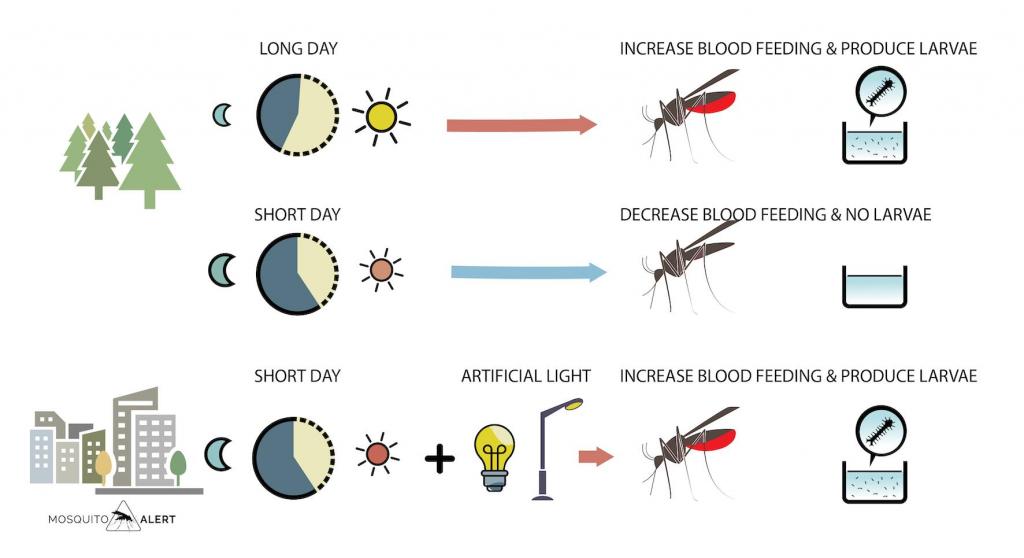 Fig. 1. It has been studied that the common mosquito (Culex pipiens) stops feeding and producing eggs and larvae when the days become short and dark with the arrival of autumn and winter. However, this reduction in their activity is altered when they are exposed to artificial light, even though the days are short, artificial light induces them to feed more than they should and to produce eggs and larvae. Source: Mosquito Alert CC-BY, based on a figure by Fyie et al. 2021. Journal of Insectarium Physiology 129: 104194.

There is no general answer. There are large differences between species, and even within species between males and females. Much remains to be studied about the response of different species to different light spectra. Most of what is known is due to laboratory experiments under controlled light conditions, but little is known about how artificial light in real environments alters the behavior of mosquitoes and people.

Currently, the World Health Organization (WHO) does not recognize artificial light as an element that alters the risk of transmission of diseases by mosquitoes. Laboratory work shows that there may be an effect, but it remains to be quantified in real conditions, in order to know whether or not artificial lighting technology compromises human health by increasing the risk of mosquito-borne diseases.