Mosquito Alert at the AIMSurv Workshop

Mosquito Alert at the AIMSurv Workshop

On March 14 and 15, 2022, a virtual congress was held to discuss the coordinated surveillance program for invasive mosquitoes in Europe within the AIM-COST program: AIMSurv coordinated by Miguel A. Miranda (UIB) and Frederic Bartumeus (CEAB-CSIC ). The meeting was organized by the researchers from the University of the Balearic Islands (UIB) Miguel A. Miranda and Carlos Barceló, to deal with two large thematic blocks: comment on the experiences and difficulties encountered in the 2020-21 season, and plan the 2022 season .

Throughout the two days of work, the two mosquito surveillance systems that make up AIMSurv were evaluated: the traditional surveillance system using a network of traps in different parts of Europe, and citizen science through the Mosquito Alert app. The congress served to explain the scientific articles that are being worked on within the framework of AIMSurv, two works that compile the data obtained by both systems and that will be published separately in the GigaByte journal. 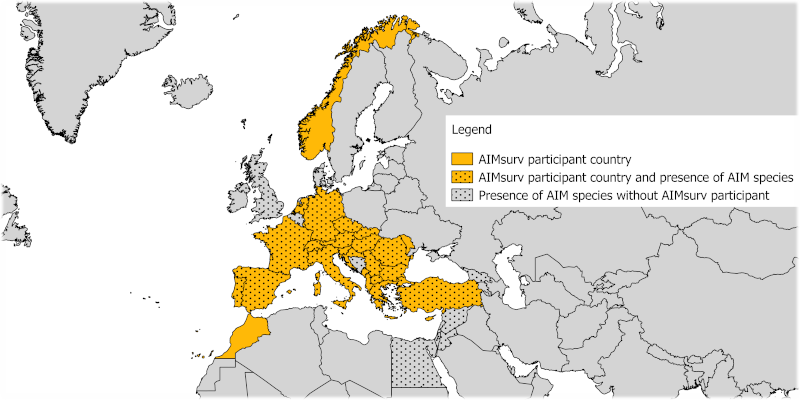 Fig. 1. Map showing in orange the countries that participate in the AIM-COST monitoring and surveillance program AIMSurv. Countries with a dotted grid are those in which there is evidence of the presence of some invasive species of the genus Aedes. Source: AIM-COST

The sessions made it possible to identify problems that had arisen in the different groups and the search for solutions, as well as to expose the changes that will take place in 2022, especially in Mosquito Alert. The flow of the digital laboratory is being redesigned in order to speed up the validation process of mosquito reports and avoid bottlenecks such as the one experienced in July 2021. To this end, work is also being done on incorporating artificial intelligence to help experts to discriminate photographs more quickly and efficiently. Finally, the public map will be renewed to display all the data that the current application allows to collect.

AIMSurv monitoring and surveillance is part of AIM-COST, a project led by Alessandra della Torre from the Università di Roma SAPIENZA (Italy) and Dušan Petrić from the University of Novi Sad (Serbia). AIM-COST aims to create a Europe-wide cross-border network for the surveillance and control of invasive mosquitoes of the Aedes genus. The AIM-COST program brings together entomologists, ecologists, epidemiologists and public health agents to evaluate current monitoring methods to optimize and standardize them on a continental scale. The harmonization of data collection systems will facilitate the production of maps of presence/absence and abundance of invasive species and their better management.