Humans are not the only species that seeks to defend itself against mosquitoes. Although there are few studies to date, it is known that other animals make use of the compounds produced by different plants to repel mosquitoes and other insects. Chimpanzees, for example, build platforms with freshly cut leaves and branches of Cynometra (a genus of tropical forest trees), thus reducing their exposure to mosquitoes that transmit malaria. Capuchin monkeys (Cebus apaella) and white-nosed coatis (Nasua narica) anoint themselves with citrus products to ward off yellow fever mosquitoes. But, there seems to be an animal, with which we are much more familiar, that also looks to plant compounds for protection against mosquitoes: the domestic cat.

Cats’ fondness for catnip (Nepeta cataria), a plant native to Europe, and the Asian silver vine (Actinidia polygama), is well known. Many cats when they find one of these plants lick their leaves, rub against them to the point of rolling on them and even chew them. Ingesting their aromatic oils causes them to behave very playfully, to the point of appearing drugged and ecstatic, chasing imaginary prey or rolling endlessly.

Researchers have observed that when cats are rubbed with these herbs, they increase their levels of beta-endorphins, “happiness hormones” that generally relieve pain and induce pleasure by activating the animal’s opioid system. For a long time, it was assumed that the only reason cats wallow in these plants is for the euphoric experience, but new studies point to another possibility: repelling mosquitoes and other insects.

Both catnip and silver vine produce chemicals called iridoids, known to repel mosquitoes, flies, cockroaches, and possibly more insects. The leaves of these plants release much more of these substances when they are licked and chewed by a cat (Fig. 1). The concentrations of iridoids before the mechanical action of a cat can be of the order of 20 and 10 higher compared to those of undamaged leaves. Concentrations that help effectively repel tiger mosquitoes (Aedes albopictus): smeared cats received half as many mosquitoes as cats without access to these plants (Fig. 1). Its use seems to be not only playful but functional. 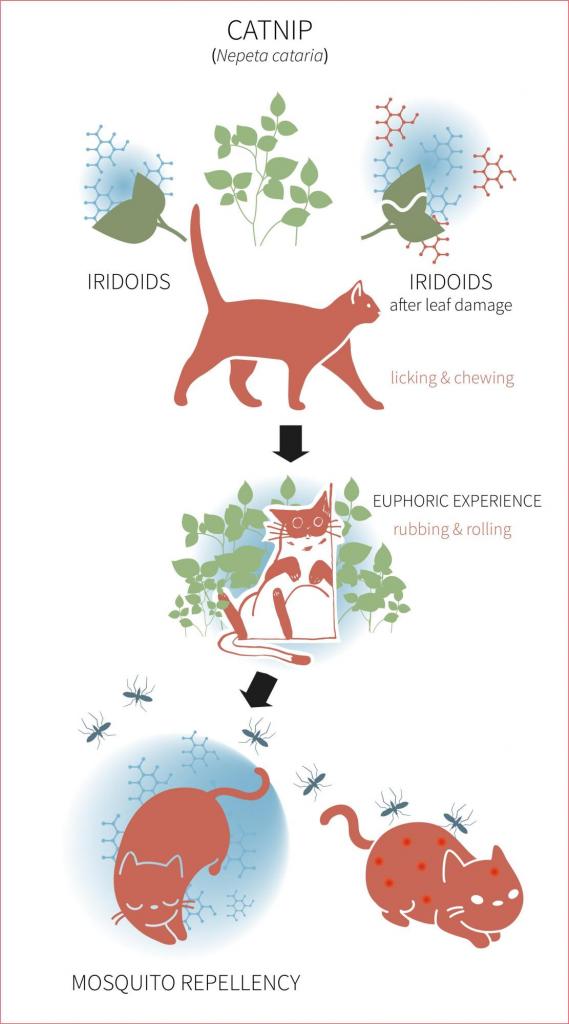 Fig. 1. When a cat bites the leaves of catnip and breaks them, they release more iridoids that serve as protection against herbivores. Cats, when rolling on the nibbled leaves, smear themselves with these substances, which gives them protection against mosquitoes by acting as a repellent. Without these substances, cats receive more mosquito bites. Source: Mosquito Alert CC-BY

It remains unknown why cats are so attracted to these plants. The researchers speculate that the ancestors of cats may have accidentally rubbed their bodies against these or similar plants, and enjoyed the feeling of euphoria they got. However, it is not clear whether it was the euphoric response or the mosquito-repellent properties that caused the behavior to end up fixed by selection in house cats and other felines in which similar behaviors have been observed. It is difficult for a predator to ambush and stay still when there are many mosquitoes around. Perhaps that made the behavior has been maintained to this day.