Why mosquitoes appear in spring

Why mosquitoes appear in spring

Most of us like spring and summer months. We feel better when we have left behind the cold and the gray cloud accumulation of winter. Spring is the season of colors, nature is full of flowers and greenery. Life seems to manifest again after months in which it seems to have been dormant. With spring, mosquitoes also reappear. From where? How? What had happened to them during the winter?

For a long time it was believed that the origin of many living beings was found in dead matter and its putrefaction. A phenomenon that was known as spontaneous generation. Aristotle (384-322 BC) used this phenomenon to explain the sudden appearance of worms, mosquitoes, eels and mice, among other animals. They all reemerged from the most diverse materials. Mosquitoes poured out of the mud, just like that. The idea of ​​spontaneous generation, in which the inert can give rise to life, persisted for centuries, until an experiment dismantled it in the early seventeenth century.

Do mosquitoes appear by spontaneous generation?

It was the Medici court physician, Francesco Redi, who in 1668 published his book Experiences around the Generation of Insects, attacking the doctrine of spontaneous generation. Redi himself relates that the idea to carry out his experiments came to him after reading Homer’s Iliad, where it is described that Thetis, mother of Achilles, covers Patroclus’s corpse to protect it from worms and flies that “corrupt the bodies of men killed in battle.” Why cover the bodies if, according to Aristotle, worms and flies arose directly from decomposing bodies? 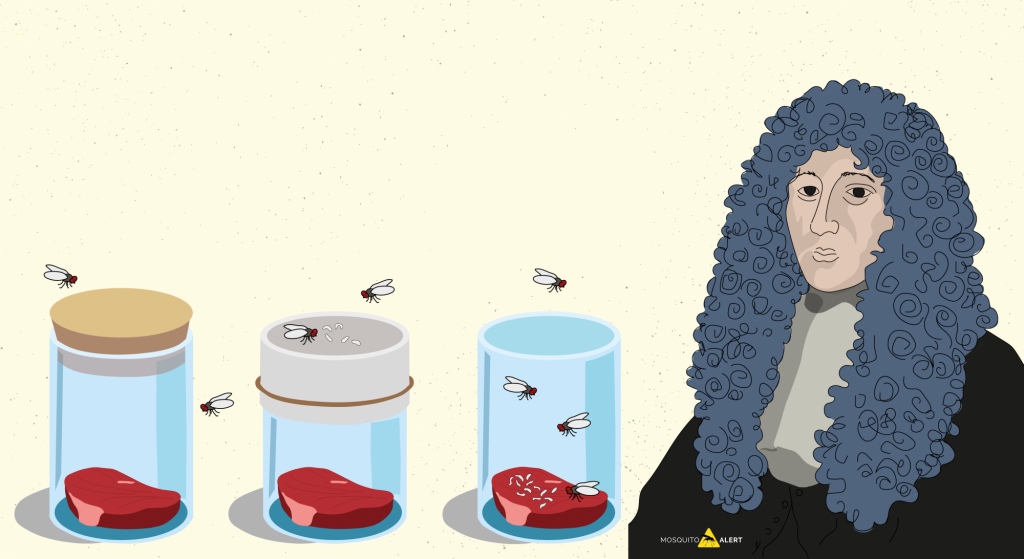 Fig. 1. Francesco Redi’s experiment to deny the theory of spontaneous generation. In the cans sealed with a stopper or gauze, no fly larvae appeared in the rotting meat, because the flies were unable to enter to lay their eggs. Source: Mosquito Alert (CC-BY-NC-2.0)

Motivated by doubt, Redi carried out a series of experiments in which she placed pieces of meat, both in uncapped jars, in gauze-covered jars, and in hermetically sealed jars (Fig. 1). With this elegant experiment, he demonstrated that spontaneous generation did not exist. Only fly larvae appeared in the uncovered jars where flies had been able to enter to lay the eggs. His experiment made it clear, life comes from life, not the inert. So what about mosquitoes in spring. How do they arise if there were no mosquitoes in winter?

The answer is that mosquitoes never disappeared in winter. In one way or another they have been there. Latent, but present. Like seeds waiting for the good time to bloom. Mosquitoes, like the vast majority of insects, have a programmed latency program known as diapause.

Diapause not only occurs in winter in temperate zones, it also occurs in dry seasons in tropical zones. When the environmental conditions are bad for the development of the mosquitoes they go into diapause. Understanding that it promotes this state of latency is very important to understand the dynamics of the diseases they transmit, since sometimes this phase serves as a reservoir for pathogens that can re-emerge with the reactivation of mosquitoes.

While most mosquitoes diapause when conditions are poor, the yellow fever mosquito does not

Although one or another type of diapause has been described in most mosquitoes to survive adverse environmental conditions, some species, such as the yellow fever mosquito (Aedes aegypti), seem to lack it.

Diapause is a hormonally programmed latency stage in response to environmental conditions. It allows animals to advance in bad weather and “encapsulate” before the cold kills them. To predict the arrival of winter, mosquitoes consist of several mechanisms. On the one hand, the photoperiod, that is, the number of daylight hours. That the days become shorter is surely the most evident sign of the approach of winter. Much more than the change in temperature which is much more variable. But how does a mosquito know that time passes? With the help of an internal clock present in all animals. This internal clock regulates two different temporal systems. On the one hand the circadian cycles, which are the rhythms of activity of day and night, and another that would allow the identification of seasonal cycles, something like an internal calendar. The latter would be in charge of recognizing that the days become longer or shorter, and as a result, activate a hormonal and physiological response in the mosquito (Fig. 2). 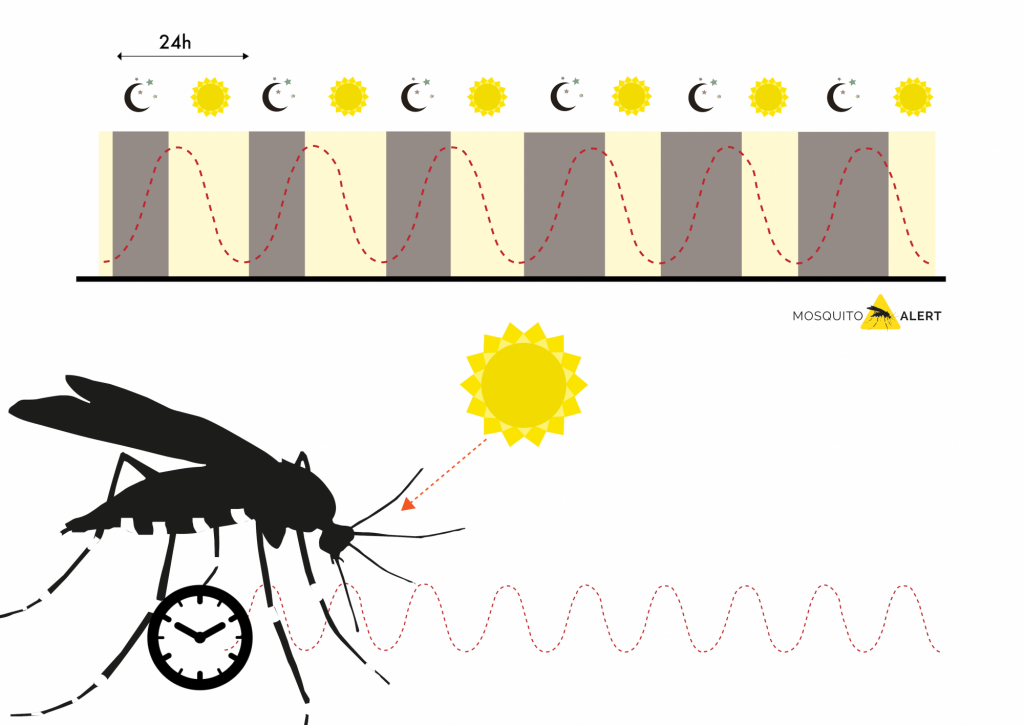 Fig. 2. Mosquitoes can perceive the change of season thanks to having an internal clock with which to compare external light periods. The red curves represent the daily oscillations of the internal clock. The light and dark areas, the light and dark hours of each day. As winter approaches, daylight hours become shorter. This signal induces diapause in the mosquito. Source: Mosquito Alert (CC-BY-NC-2.0).

To the stimulation of the hours of light, the one of the temperature is added. Although more variable than light, temperature allows you to refine the animal’s response. Its effect when initiating diapause has been observed in the tiger mosquito (Aedes albopictus), in other Aedes species, as well as in the common mosquito (Culex pipiens).

Diapause can occur in embryos, larvae, or adults

The change in daylight hours, temperature, and humidity perceived by female mosquitoes causes their embryos to go into diapause. So it is with the tiger mosquito. It is not the adult mosquito that goes into diapause, but the embryos, which remain dormant during the winter in their eggs without hatching. These eggs are different from normal eggs. They are larger and contain a higher amount of lipids to protect and nourish the embryos for months. They have to hold on until spring returns.

The tiger mosquito survives winters in their embryonic phase, protected inside the eggs waiting for the return of good weather

The diapause of the common mosquito (Culex pipiens) is different. The change in daylight hours and temperature alter the behavior of their females. With the eminent arrival of winter, females stop feeding on blood, instead of being attracted to humans and other vertebrates, they are attracted to the nectar of flowers. They also start the search for a dark and humid place in which to take refuge during winter. The common mosquito does not spend the winter as an egg, as the tiger mosquito does, but as adult mosquitoes that will reactivate with the arrival of good weather.

The common mosquito overcomes winters in its adult phase, sheltered in dark and humid places that protect it from low temperatures

Fig. 3. Phylogenetic relationship of different genus of mosquitoes and the phases of the biological cycle in which diapause has been described for different species. The numbers refer to the number of species of the genus with diapause, for example, in Aedes mosquitoes, 18 species with embryonic diapause have been described, including the tiger mosquito, and 6 species with diapause in the larval phase, but no species with diapusa in the adult phase. In Anopheles and Culex mosquitoes it is the other way around, most species have diapause in the adult phase. Data from Denlinger & Armbruster 2005. Annual Review of Entomology 59: 73-93. Source: Mosquito Alert (CC-BY-NC-2.0).

The study of invasive species such as the tiger mosquito has shown that the timing of the diapause can evolve rapidly. During their expansion along different climatic gradients, mosquito populations have been adapting to the signals that trigger the diapause, advancing or delaying it. Not all populations respond the same amount of daily light hours. The answer depends on the latitude at which they are. This suggests that they will also be able to respond to climate change. Understanding how mosquitoes respond to environmental changes is essential to predict the spread of the diseases they transmit.

The molecular basis of the diapause of species of sanitary interest is increasingly known. Advances in genetics and changes in gene expression may lead to the development of new ways to control their populations, based on genetic or chemical disruption of diapause.

At the moment, we know that with the arrival of good weather, mosquitoes come out of their diapause state and are active again. They have never disappeared. They have always been here. Egg-shaped, larvae or adult sheltered in some dark corner, they have endured winter to return once again in spring. It is time to remember to take the necessary measures so that our home is not a place where they can raise. Avoid having containers that store standing water, and have the Mosquito Alert application prepared to report the presence of mosquitoes.

Robich RM, Denlinger DL. 2005. Diapause in the mosquito Culex pipiens evokes a metabolic switch from blood feeding to sugar gluttony. Proceedings of the Natural Academy of Science of the United States of America 103: 15912-15917