Entomological surveillance plans to detect invasive mosquito species early are very useful. The active surveillance program carried out in La Rioja since 2016 made it possible in 2020 to identify the presence of the tiger mosquito (Aedes albopictus) in the autonomous community for the first time. With this finding, there are now 11 Spanish autonomous communities where the presence of the mosquito has been discovered, and the fifth non-coastal region where it has been found.

The surveillance program is part of the Riojan Plan for action and monitoring of the Zika, Chikungunya and Dengue virus emergency, developed in 2016. The fortnightly surveys, using oviposition traps, carried out in 6 Rioja municipalities, allowed early detection in 2020 of the species in two traps located in the municipality of Haro (Fig. 1). 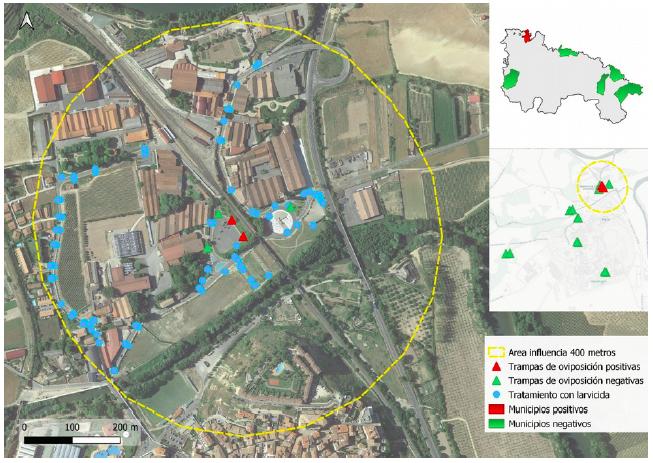 Fig 1. Map of the municipality of Haro (La Rioja) with the location of the oviposition traps (triangles) showing the traps with the presence of the tiger mosquito (red triangles) and the places with water where control treatments were applied to prevent the establishment of the species . The map on the right shows the 6 La Rioja municipalities included in the 2016-2020 surveillance program. Source: Ruiz-Arrondo et al. 2021. Annals of Biology 43: 117-122

The finding was communicated by the experts Ignacio Ruiz-Arrondo, Sarah Delacour-Estrella, Paula Santibáñez and José Antonio Oteo, to the General Directorate of Public Health of La Rioja (Dirección General de Salud Pública de La Rioja). The area was searched for more tiger mosquitoes with entomological vacuum cleaners and the larvae found in accumulations of water in a radius of 400 meters around the traps where the species was detected were analyzed (Fig. 1). The tiger mosquito was not found again in the area, suggesting that it was a punctual introduction and that the species has not yet established itself in the municipality.

The traps where they were identified are located in a public parking lot, with transit of tourists and merchandise, which makes us suspect of an introduction through a vehicle. Earlier work by Mosquito Alert members had confirmed the passive dispersal of the tiger mosquito inside private vehicles. In the case of the municipality of Haro, the introduction possibly took place from the Basque Country, since the mosquito present is less than 40 kilometers away by road, while the closest populations with tiger mosquitoes in Navarra and Aragón are more than 150 kilometers away in each case.

The authors of the work suggest intensifying surveillance measures in the municipality of Haro for this spring, as well as encouraging people in the area to use the Mosquito Alert app to help detect this or other invasive species in the region.