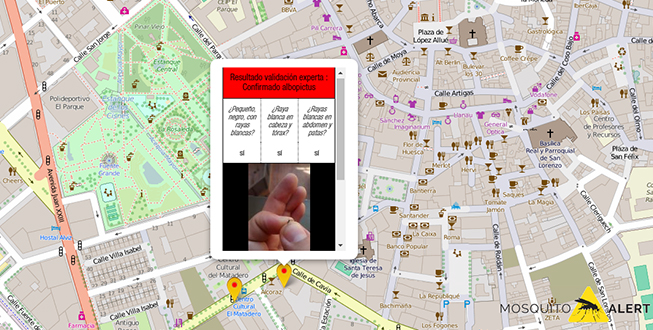 Mapa of Huesca where the first specimen was found in 2015, thanks to participants of Mosquito Alert.

The tiger mosquito can now be found in the interior of Spain. The news was related in the Bulletin of the Aragonese Entomological Society vol. 58, published in June 2016 after a control and monitoring team for the invasive species created by the Ministry of Health and based at the University of Zaragoza confirmed the sighting in the city of Huesca.

In August 2015 the Mosquito Alert platform received a photo of a mosquito sent from the city of Huesca, more specifically near Miguel Servet Park. After the persons validating information sent via the platform confirmed that the mosquito met the typical characteristics of a tiger mosquito, a team of entomologists went to carry out an inspection of the area. “There were many places which were likely centers of mosquito breeding, and in some of them which had water we were able to identify tiger mosquito larvae,” explains Sarah Delacour, researcher at the Faculty of Veterinary Science at the University of Zaragoza. The entomologists also set up traps in order to collect eggs and take them to the laboratory, and, in fact, “a proportion of the larvae which hatched were tiger mosquitos,” says Sarah Delacour. The team also captured two tiger mosquito females in the immediate surroundings of the inspected area.

The mosquitos may have been introduced from other countries

Following genetic analysis it was found that the DNA of the tiger mosquitos found in the city of Huesca was a bit different from those found in the rest of the Iberian Peninsula. “Considering that this mosquito moves around the country by means of human transportation, it is possible to imagine that they came from anothercountry,” says Frederic Bartumeus, director of Mosquito Alert, though he also insists on the necessity of additional analyses to confirm this possibility. 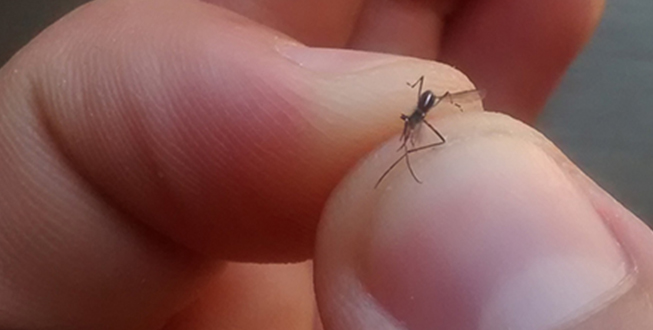 Public health agencies have started working on the issue

The detection of the tiger mosquito in Aragon has initiated the dispatching of city-level inspections in order to continue with monitoring and control of the species. Also, in terms of sanitary protocols, the Directorate for Public Health of the Spanish Ministry of Health, Social Services and Equality is adapting the nationally-adopted protocol for the province of Aragon.