“As he approached Babylon, Nearch, who had returned to the Euphrates by the great sea, said that some Chaldeans had spoken to him, urging him not to enter Babylon; but this one did not pay attention, but continued his march, and when he was already touching the walls, he saw many crows fluttering and pecking at each other, of which some fell in front of him.”

This is how, in the late 1st century, Plutarch described the arrival of Alexander the Great in Babylon. This small fragment of volume V of his “Parallel Lives” took a few years ago to the epidemiologist, John Marr, and to the expert in infectious diseases, Charles Calisher, has announced that they had found the cause of death of the Macedonian conqueror.

After seizing the Macedonian throne, Alexander overthrew the Persian Empire and looked east, eventually invading much of India. It gave rise to the largest empire of the time, but it died suddenly in 323 BC. A. In the mesopotámica city of Babylon, located near the present Baghdad. His death has intrigued historians for years, the chroniclers of the time did not mention any of the endemic diseases in the region, making his death a mystery. Modern authors have suggested different types of poisonings, influenza, malaria and typhoid fever as possible causes. All of them based on the different documents that describe the illness that affected him for two weeks until his death.

A few years ago, Marr and Calisher came up with a new suggestion: Alexander the Great was the victim of encephalitis caused by the West Nile virus. A fever, which is now common in parts of Africa, Western Asia and the Middle East, although more and more cases are detected in Europe and the United States. The virus is mainly housed by birds, with mosquitoes transmitting it from one individual to another, or from one species to another, sometimes being able to transmit it to humans or horses and other equines.

His death took place in late spring. Babylon, located on the Euphrates River, bordered on the east by a swamp. Birds and mosquitoes had to be abundant, as they are in other swampy areas.

Plutarch’s text is the one that gave the lead to both investigators, to suggest West Nile fever as the cause of their death. The scene of crows flying frantically, with collisions and individuals falling dead, led them to think of the West Nile virus (Fig. 1). Among the birds, the virus mainly affects corvids. The family of birds to which crows belong are particularly susceptible to the pathogen, with some of their species being responsible for their spread. The virus is transmitted from one bird to another and, from time to time, some mosquitoes can transmit it to people and horses (Fig. 2). Humans and horses can get sick, but they cannot transmit the virus, unlike birds. From the point of view of the virus, infecting a person is a dead end, unlike infecting birds.

Fig. 1. The scene of the crows at the entrance to Babylon is the one that suggests that these birds could be infected with the West Nile virus and end up infecting Alexander the Great.

In addition to the crows text, Marr and Calisher tested their idea using an online diagnostic program: GIDEON (Global Infectious Diseases and Epidemiology Network). When introducing the symptoms described in the texts of the time about Alexander’s death (respiratory infection, liver disorder, skin rashes, etc …) along with that of the birds, the response obtained by the program was only one: West Nile fever.

Obviously, not all authors have accepted this version. Some argue that symptoms of West Nile virus infection are generally mild, similar to the flu, and most people recover within a few days. The disease can be complicated for the elderly and people with a weakened immune system, requirements that a 32-year-old Alexander the Great who had conquered such a vast empire does not seem to meet.

But regardless of whether or not Alexander could have been weakened enough to complicate the infection, other researchers provided other data to doubt West Nile fever as the cause of his death.

Was there West Nile virus in Alexander’s time?

The authors, Marr and Calisher, assumed that the virus, endemic in the Middle East, had to circulate between the Tigris and the Euphrates, not only centuries, but millennia, and just as the birds were affected by the virus, Alejandro He was able to contract the disease from a mosquito bite. 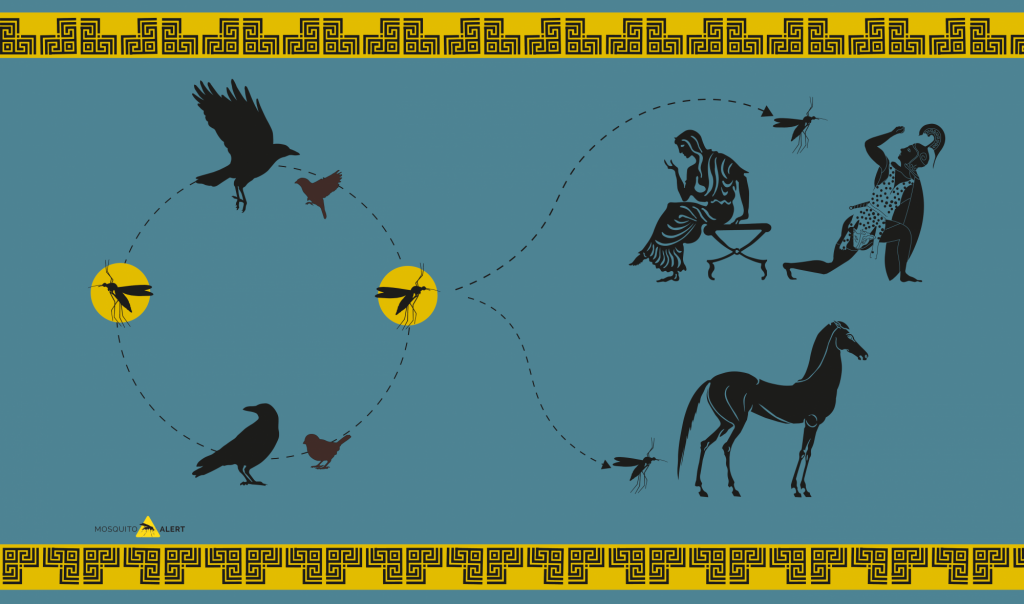 Fig. 2. West Nile virus cycle that is maintained by transmission between birds through mosquitoes, mainly Culex. Sometimes infected mosquitoes can transmit the virus to people and horses.

But this hypothesis does not seem to be fulfilled in view of genetic studies on these viruses. A study on the analysis of the time of divergence between different flaviviruses (the group to which the West Nile virus and dengue belongs), estimates that the virus, which supposedly killed Alexander, appeared 1043-1274 years ago, that is, more a thousand years after his death. Other work suggests that some of the modern lines of the virus emerged 300-400 years ago.

Viruses evolve quickly, it not only makes it difficult for us, based on the effects of current viruses, to infer what viruses or symptoms suffered from ancestors thousands of years ago. But also, that they can be dated correctly at what time some viruses diverged from each other. Substitution rates are reliable for the most recent divergence events, but they lose reliability as you go back in time. It is possible that in the Babylon of Alexander the Great 2,500 years ago, an ancient flavivirus was already circulating, but can it be said that it was the same as the current West Nile virus?

The death of Alexander the Great will remain a mystery unless one day his remains were found, another mystery as great as that of his death for archaeologists and historians. But the debate unleashed from the work of Marr and Calisher added an important point to the topic: attending to the details of the environment when diagnosing a disease, wondering what the climate, fauna and behavior were like, if there are descriptions of it. Today we know that our health is intimately linked with that of other animals and ecosystems.

May FJ, Davis CT, Tesh RB, Barrett. 2011. Phylogeography of West Nile virus: from the Cradle of Evolution in Africa to Eurasia, Australia, and the Americas.