A spring with more mosquitoes

A spring with more mosquitoes

The spring of 2020 in Spain has been warm and rainy. The State Meteorological Agency in June announced that it had been the fourth warmest spring in Spain since 1965, with the highest minimum temperatures in the series. In addition to the high temperatures, the season has been as a whole wet, the fifth rainiest spring so far in the 21st century.

The warm and rainy spring has given rise to a greater number of mosquitoes than has been reflected in the observations received in Mosquito Alert during the first semester.

If we compare the number of accumulated tiger mosquito observations received since 2015, it can be seen that the values ​​of 2020 shoot up in May and June (red area) above any of the previous years, in this case 2018, which until today was the year with a season start with more mosquitoes (yellow area indicates the difference between 2018 and 2015). It seems that the rains and heat of the spring weeks created the ideal conditions for the reproduction of the tiger mosquito in the spring. How the season will continue is difficult to say, looking at the previous series it can be seen that 2015 had few mosquitoes at the beginning of the season but its values ​​shot up in August and September. This shows that the spring trends cannot be extrapolated to the evolution of the curve in summer. Taking into account that the biological cycle of the tiger mosquito is very short (about 15 days), the density of future mosquitoes is largely linked to future phenomena related to the availability of water that favor their reproduction.

Another way to analyze the data obtained is to represent the accumulated observations of the tiger mosquito, as in the previous figure, but this time correcting the data, taking into account the sampling effort. The sampling effort is estimated taking into account the number of participants in each area, in this case a 2 × 2 km cell, on a specific day as well as a modeling of their propensity to make observations that day. This correction is important in order to estimate the abundance of the tiger mosquito, it is not the same to have 10 observations in an area where there were 5 people with the app activated, as another with 10 observations but with 20 people with the app activated. To carry out this correction, Mosquito Alert needs to know how many people with the app had this day in a certain area. Obtaining this information is achieved while maintaining user privacy at all times.

Record the position of the device while maintaining user privacy

In order to fit abundance data into models, the Mosquito Alert app collects data on the approximate position of the device from users at random intervals. It is not about exact position data, but they are rounded on the same device to a 2×2 km grid, which is to know that a device is within an area of 2 million square meters. The information obtained by the Mosquito Alert server is that in a specific grid there was a device at that time. The diagram represents in the figure on the left the itinerary of a device throughout a day, where the red points are the moments in which the app collects the position data, after rounding the grid, the server receives the information of the grids in which it was present, red grids in the figure on the right. 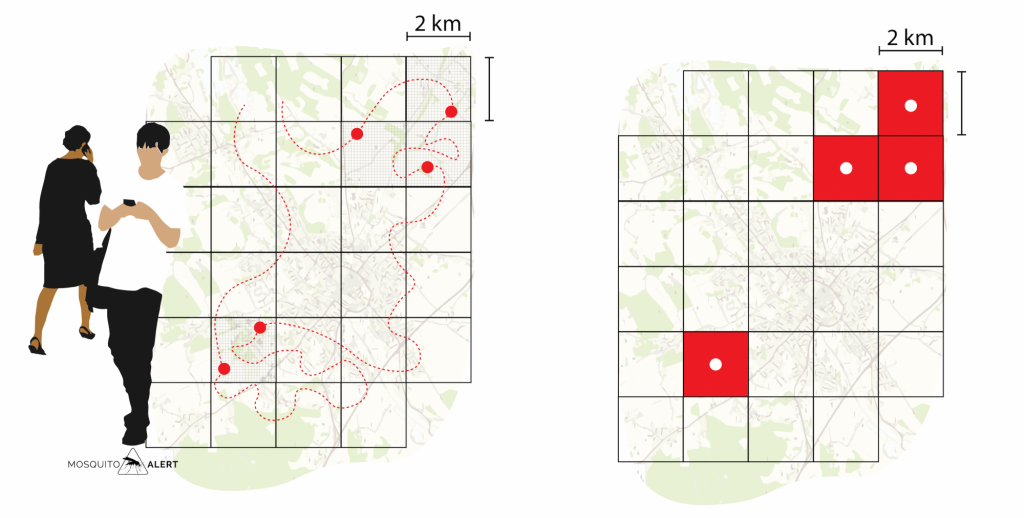 To further protect the privacy of users, the locations of the app are linked to a randomly generated identifier that prevents it from being related to any other information that allows their personal identification. Despite the importance of these records in order to calculate the abundances of mosquitoes, users can, at any time, deactivate this function of the app.

Considering the sampling effort, 2020 is the spring with the most mosquitoes in the series

It can be seen that the values of the number of mosquitoes accumulated change with respect to the previous figure, but the trends remain, so even taking into account the number of people with the app activated, the spring of 2020 has been a prolific spring and with more mosquitoes than the previous data series. Until 2020, spring 2018 was the season with the most mosquito registrations, although the season with the most mosquitoes as a whole is still 2015.

The Mosquito Alert researchers want to use these data series from different years to study the effect of climatic variables on the mosquito explosion in spring. Knowing this relationship will allow in the future to be able to make predictions of what the beginning of the tiger mosquito season will be like. The evolution of the season, as previously mentioned, cannot be deduced so much from the previous conditions, but from the future environmental conditions that provide the species with the environments for its reproduction. In order to predict what the start of the season will be, it will be necessary to consider not only spring temperatures and rainfall, but also winter environmental conditions.

The analysis of the data accumulated in the last years will allow in the future to be able to develop the first predictions. Will the day come when we can forecast mosquitoes just as we can with rain or temperature?