Using the Mosquito Alert application, neighborhood residents will be able to warn about new population centers of the insect, aiding control measures. Also, the Valencia City Government has chosen to use a new product to eliminate this invasive species which is already present in 31 districts of the city. 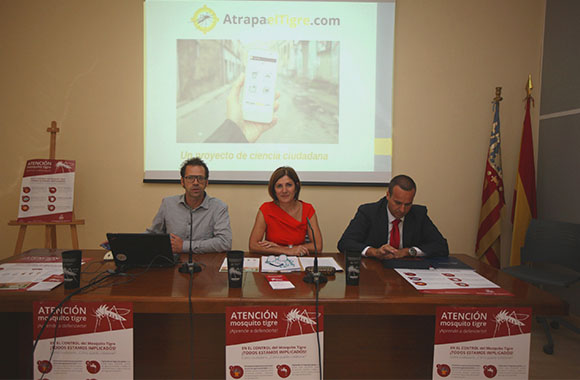 F. Bartumeus and Maite Girau, Councilor of Health of the City of Valencia, at the press conference. Credit: A. Valencia

Beginning in October, the City of Valencia will collaborate with Mosquito Alert to find tiger mosquito hot spots and deal with them more actively, including the use of a new treatment which impedes breeding of the species for between 6 months and a year.

Using the Mosquito Alert mobile application, citizens will be able to make reports (including the possibility to attach photos) in the case that they see a tiger mosquito or breeding site. All data received via the application, including geolocated photographs, will be made available openly in real time in interactive maps on Mosquito Alert’s web page.

“Services for surveillance and control of this species will use these maps to prioritize and organize different vigilance and control measures undertaken in the city,” explains ICREA research professor and director of Mosquito Alert, Frederic Bartumeus.

The creators of the project explain that this will allow them to create models which can predict the presence of tiger mosquito populations in the city by combining data from citizens and from City Hall. “We are promoting models of citizen science and management which are participative and open, where citizens, scientists, and control agencies work together to minimize the problems associated with this invasive species,” says Frederic Bartumeus.

Paint which fights against the tiger mosquito 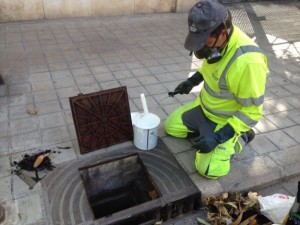 An employee of Lokimika applies the product to a water drain.

The Councilor of Health of the City of Valencia, Maite Girau, presented the new tool which the Public Health Agency will use to expand its preventive measures to control the invasive species. “It is a paint which is applied on the walls of water drains, respecting all health recommendations, and which is guaranteed to impede breeding of these mosquitos.” The product has already been applied in the 31 problematic, mosquito-ridden areas of the city which have been detected to date.

The treatment is applied by the Lokímica company, whose general manager Noe García has explained, “though the City of Valencia is currently in the second of six phases which can be initiated in cities in which the tiger mosquito has expanded, the City Hall is adopting measures of the fourth phase, and this is helping its control.”