When feeding on blood, it is called hematophagy (from the Greek αἷμα haima “blood” and φάγειν phagein “eat”). It may seem like a strange way of feeding, but the truth is that this strategy is widely spread in the animal world, from mammals to insects, fish and birds. Feeding on the blood of others has evolved independently in various taxonomic groups, perhaps up to 100 different times, giving rise to around 30,000 blood-sucking species. From vampires, to mosquitoes, butterflies, birds , leeches, fleas, ticks, and a myriad of animals that have adapted to these diets.

In order to feed on blood, animals have had to undergo changes in their physiology, morphology and behavior. Blood is rich in protein but poor in vitamins and carbohydrates, which requires special adaptations, both genetic and with communities of bacteria that help them do so. In addition, the blood is extremely rich in iron, which in excess can be toxic, requiring mechanisms to block it and avoid poisoning.

Being a bloodsucker carries great dangers, the main one being detected by the host and ending up crushed by it. To put ourselves in their place, we should imagine how we would approach an animal whose weight is 35 million times our own. We must approach this gigantic mastodon and bite him hard enough to make him bleed. It’s easy to die trying. This relationship is the one that exists between a human weighing 70 kilos and a mosquito weighing 2 milligrams.

Finding the host from which to extract a few drops of blood is not easy either. In a forest, there are possibly hundreds of meters between one mammal and another. On our scale that would be like traveling several kilometers to look for food. City mosquitoes have it easier because we live in high densities. In any case it is a risky activity, and everything and so has evolved multiple times giving rise to a variety of bloodsuckers much greater than that of fictional vampires.

Some groups are obligate blood-suckers, that is, they need to feed on blood to survive. This is the case of the so-called vampire bats (Desmodontinae), a group of three species of bat from the American continent that feed only on blood. They eat birds and mammals, including cattle and humans. Once they have located a host, they have an infrared radiation sensor that allows them to detect areas where blood flows close to the skin. With their sharp and sharp incisors they cut into the skin, but they do not cut veins or arteries. Their saliva, like that of mosquitoes, contains blood thinners that prolong bleeding from the incision. However, they do not absorb blood, as mosquitoes do, but instead suck it up. These are the real vampires.

The name “vampire” was used in French to describe them in 1810, in reference to the Slavic folklore that swarmed the Balkans. At the end of the 16th century, the Slovenian writer Janez Vajkard Valvasor documented the existence of a vampire in Istria. The Serbian voice “wampira” (wam = blood, pir = monster) designated the dead man who returned to feed on the blood of his acquaintances. The term entered the German language when Austria gained control of part of the Balkans, and from there the word jumped and became popular in Western Europe, to the point of giving the name of the myth to the American bats that fed on blood. In a script twist, later, the bats ended up impersonating the folk vampire from the hand of the novel “Dracula” by Bram Stoker. In reality, blood-sucking monsters like Dracula, present in many cultures, have nothing to do with true blood-sucking but with our internal fears, of the ancient panic of imagining something taking away our vital energy.

In the waters of the sea there is another group of vertebrates that feed on blood. These are lampreys, fish with an elongated, cylindrical body, without scales, gelatinous, very slippery. They lack a jaw, instead having a circular suction cup mouth with several concentric circles of teeth. With it, they hook onto their prey, scrape their tissues and suck their blood. Its hosts are various sharks, salmon, cod and even marine mammals.

Even among birds we find species that use blood to feed. The vampire ground finch (Geospiza septentrionalis) of the Galapagos Islands is famous for its unusual diet. Occasionally it feeds by drinking blood from other larger birds, pecking at them with its sharp beak until blood spurts. A behavior that possibly evolved from their behavior of cleaning the parasites of these birds, to feeding directly on the birds. 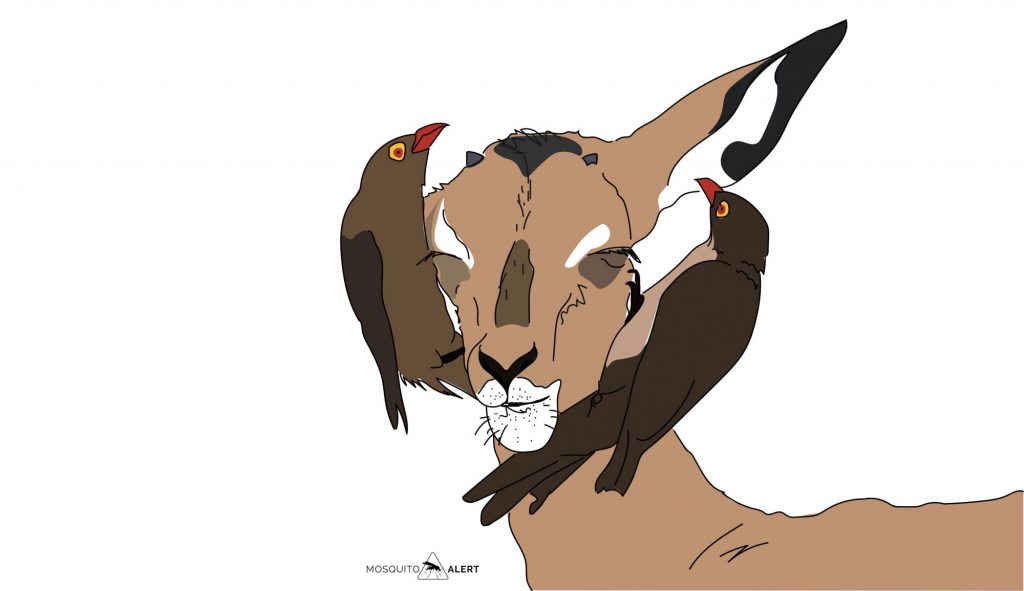 In Africa, Bupaghus erythrorhynchus also occasionally feed on the blood of mammals for which they normally hunt ticks and lice. It has been seen that when allowed to choose between blood and ticks, these birds opt for blood.

Like vampire ground finches, many other organisms are not obligate blood-suckers, being able to obtain nutrients from resources other than blood. This is the case with mosquitoes. These insects digest blood, but they also consume other substances such as nectar or pollen from plants. In fact, male mosquitoes never feed on blood, only females bite, and not in all species, nor is it always the case. Females require blood for the development of their eggs. Their blood doses are higher when previously they have not been able to feed on the sugars provided by the nectar of the flowers.

Anopheles gambiae mosquitoes increase their frequency of bites if they have not had access to sugars before. When they combine both sources of food they live longer, as has been observed in the case of the common mosquito (Culex pipiens), Anopheles sergentii and Anopheles claviger. Despite the change in the frequency of bites, it is unknown whether it implies a reduction in the transmission of pathogens.

But there is evidence that in areas where there are a large number of plants rich in sugars, the number of female Anopheles sergentii mosquitoes can be four times higher than in areas without such plants. Although the presence of plants with sugars reduces the number of bites, it also increases their longevity, survival and allows larger populations of mosquitoes, demonstrating the importance of this food source for mosquitoes. And offending an opportunity to regulate mosquito populations by controlling the plant community of an area.

A work carried out with the tiger mosquito (Aedes albopictus) showed that females preferred to deposit their eggs in containers with flowers nearby, than in containers without flowers. Where there were flowers with sugars, there were more eggs. It is suggested that the selection of flowering breeding sites is to provide a safe source of food for the next generation.

Vampires that feed on vampires

Vampire bats have more parasites than the average of bats, including those known as “bat flies”, which are all related to flies and mosquitoes, they have the appearance of a spider, with a flattened body, without eyes or wings, specialized in sucking the blood of bats.

The practice of hematophagy by itself is not deadly, the animals that practice it never kill their hosts, as fictional vampires do with their victims, but its practice carries a risk: the possibility of transmitting diseases. Malaria, rabies, bubonic plague, dengue, Zika, West Nile fever, typhus and a large number of diseases are transmitted involuntarily by the various animals that feed on the blood of others. It has been seen that some pathogens even modify the smell of the infected organism to make it more attractive to blood-suckers, thus manipulating the vector, but we will talk about that later.