The mosquito season has already started and this year we open our search to a new species: Aedes japonicus, the East Asian bush or rock pool mosquito. An invasive species that we detected for the first time in Asturias last year. It was the first observation in Spain and in southern Europe. In other countries of Central Europe the mosquito is widely distributed, therefore, to prevent its expansion throughout the peninsular northwest we ask for your cooperation. The information we receive will be key so that the Health Administration, in collaboration with the University of Zaragoza, can define the expansion of this mosquito in the area.

We invite people from Asturias and surrounding communities to send us any photo of mosquitoes that you think may be Aedes japonicus (Fig. 1).

As for now our application is only prepared for you to send observations of tiger mosquito (Aedes albopictus) and the yellow fever mosquito (Aedes aegypti), we explain here the instructions to follow if are going to report an Aedes japonicus:

When the application asks you: What does your mosquito look like?

Select in all the answers: “Neither“, so we know that you are not trying to report a tiger mosquito or a yellow fever mosquito.

Where do you ask: What does the abdomen of your mosquito look like?

We will respond: Neither

And before sending the report in “Any comments to add?”

We will write: #japo 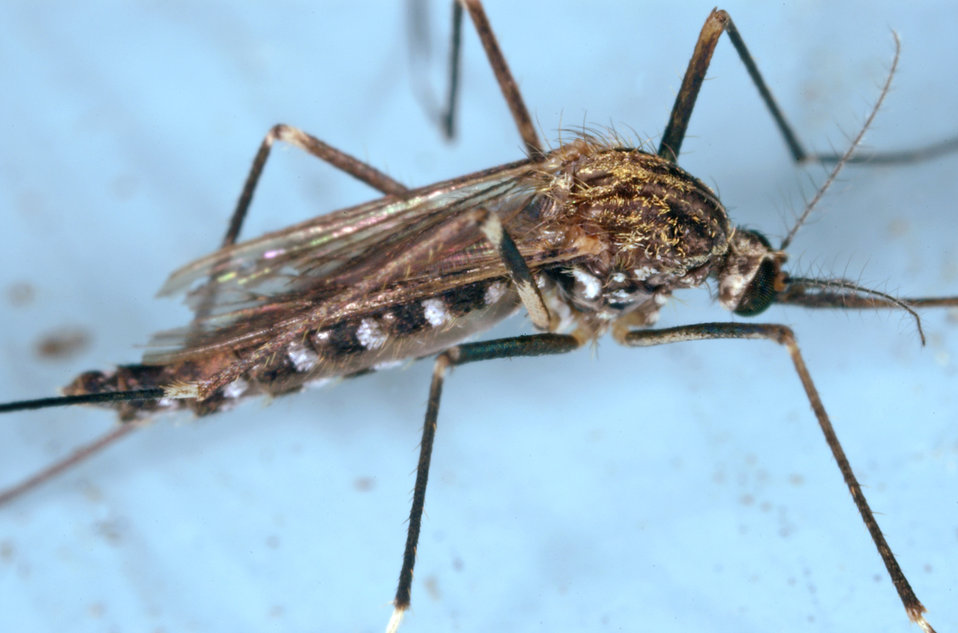 How is Aedes japonicus mosquito?

Its appearance is similar to that of the Asian tiger mosquito or the yellow fever mosquito. However, Aedes japonicus is larger than these and of a lighter brown color, while the tiger is almost black. The most characteristic feature of Aedes japonicus is that it has several golden lines in the thorax (Fig. 2).

You can also distinguish them by the type of environments where you can find it. The Asian tiger mosquito has a preference for urban spaces and warm environments. Aedes japonicus, is more common in wooded areas, where it comes to breed in flooded spaces, livestocks’ watering holes, puddles in rocks or buckets, tires and any other utensil that contains water. While Asian the tiger mosquito is a species that flies badly being able to cover very short distances, Aedes japonicus can fly long distances and is much more resistant to cold.

This resistance to the cold has allowed it to settle in the north of France, Switzerland, Germany, Holland, Hungary, Slovenia and the north of Italy (Fig. 3). In the Iberian Peninsula, the Cantabrian coast has the most suitable conditions for it to be established, that is why we make this appeal to the people who inhabit the region and to all those who visit it. 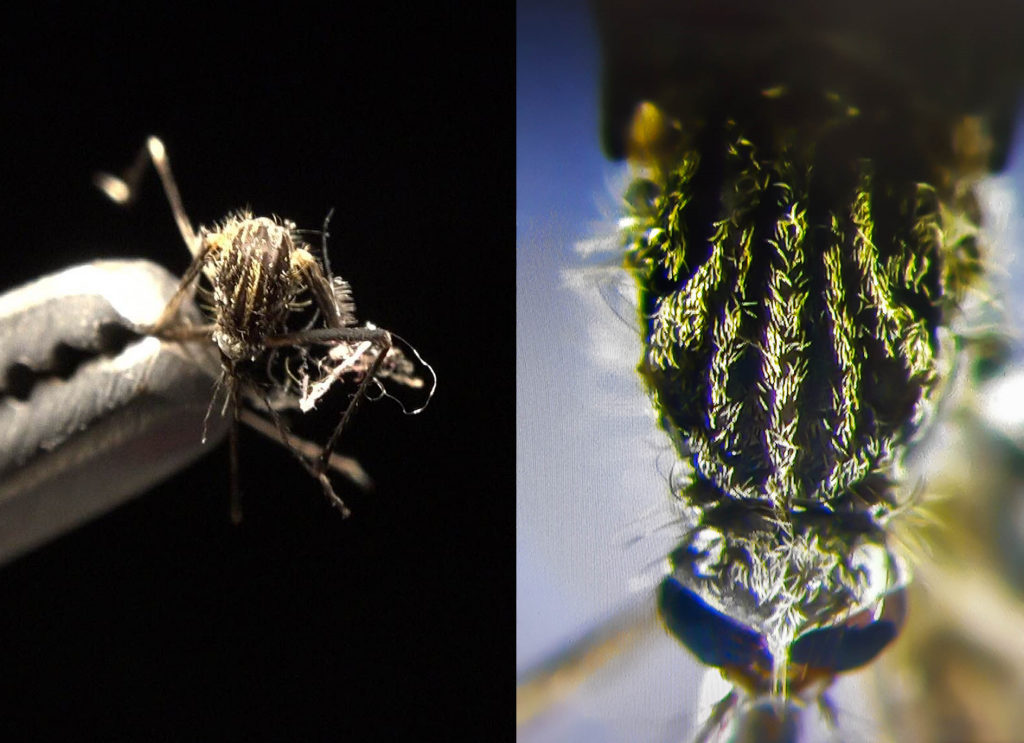 Fig. 2. Detail of Aedes japonicus torax with the several lines of yellowish scales on a black background. Scource: CC BY Roger Eritja

Why is it important to know where Aedes japonicus is?

The species native to Japan, Korea, Taiwan, Southeast China and eastern Russia, can be a transmitter of viral diseases although of less relevance than the Asian tiger mosquito or the yellow fever mosquito. The virus that transmits better is that of West Nile fever. Although in laboratory conditions it has been proven that it is capable of being infected with dengue and chikungunya, it is not considered a real risk in relation to these viruses.

As in everything related to invasive mosquitoes, prevention is vital to detect it in time and delimit where it is distributed before it can become a major problem.

It is at this point, where the Mosquito Alert platform is relevant as a monitoring tool for mosquitoes that transmit diseases. In fact, the detection of Aedes japonicus in Asturias was made thanks to the photos that a person sent through the application in June 2018 from the municipality of Siero.

The photographs caught the attention of the entomologists of the project due to their similarity with Aedes japonicus, until then unknown in the Iberian Peninsula. Suspicions were confirmed by a field study in the area that demonstrated the presence of the species.

This summer you can have a very important role to confirm its presence and determine its current distribution, which could be much wider than what is suspected in the North of Spain.

But do not forget the other two species, especially the tiger mosquito, which can appear at any time! 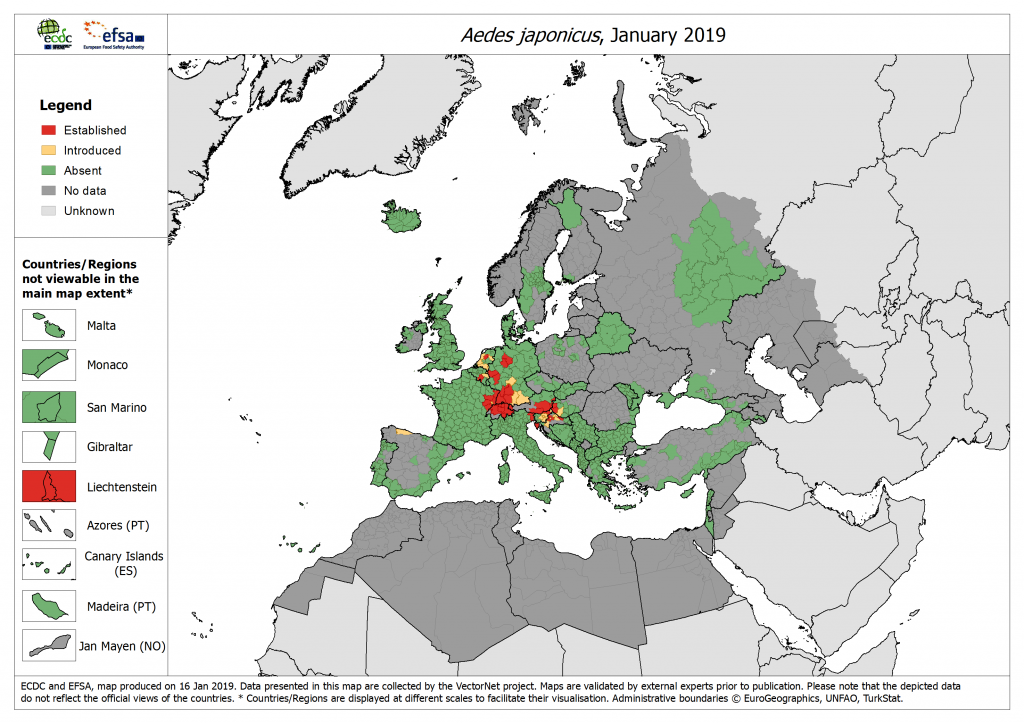 Fig. 3. Distribution map of  Aedes japonicus in Europe, January 2019, yellow and red show the presence of the species. Source: European Centre for Disease Prevention and Control