When a mosquito bites!

When a mosquito bites!

When a mosquito bites us, an itchy welt usually appears where the female mosquito has pierced our skin to suck a little blood with which to feed. This welt usually disappears in a few days.

Sometimes, however, a mosquito bite causes inflammation, pain and irritation in a larger area that leads us to scratch and even cause small wounds. As a general rule, their bites do not cause excruciating pain, but we are all aware that when several mosquito bites come together at the same time they can make us have a bad day.

But why do their bites bother and irritate? Do we really understand what happens when a mosquito bites us?

In fact, mosquitoes are much more complex than most of us realize.

How do mosquitoes bite us?

To survive, mosquitoes, both male and female, feed on plants and flowers, they obtain sugars that provide them with enough energy to carry out their basic activities, but when it is time to reproduce, females need extra energy for the development of the eggs. This energy is obtained from the blood, rich in proteins that allows the development of their eggs. In this way, the taste system and, above all, the olfactory system are crucial for the survival of mosquitoes in the environment. They help them identify and locate their food sources.

Both to pierce the stem of a plant and to suck blood from an animal, mosquitoes have a system called a biting-sucker formed by a stylet or proboscis that allows them to pierce and then suck the fluids.

The stylet is normally kept within a sheath formed by the lip, which protects and hides the rest of the mouthparts. When the mosquito lands for the first time on its potential victim, its pieces are still completely protected, the individual palpates the skin with the tip of the lip several times until they find the most suitable place to bite. This is usually the closest to a blood vessel. 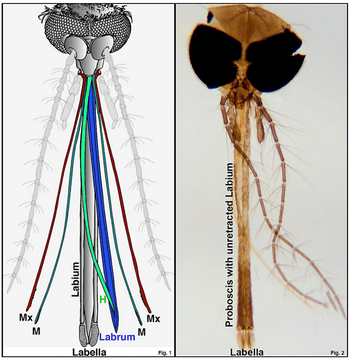 The jaws are used to pierce the skin. The jaws are pointed while the maxillae are leaf-shaped and serrated. To introduce them, mosquitoes move their heads back and forth.

The hypopharynx and labrum, on the other hand, are hollow, acting as a tube. Through the hypopharynx they inject saliva with a very powerful anticoagulant protein. This protein prevents platelets from forming a clot, thus ensuring that the blood does not stop flowing while they ingest it. The labrum is the channel through which they suck blood and, therefore, feed. In fact, the mosquito is able to filter the red cells from the plasma and get rid of the water, thus leaving more space to store the nutrients from the blood in the abdomen.

Once they have stung us, they sneak away. In fact, we do not become aware of its action until the itch of the bite begins. Its evolutionary success is based on biting unnoticed.

Why do mosquito bites sting?

The key is in the saliva that they inject us to which we develop an allergic reaction. Each person develops it that if, in a different way.

Mosquitoes, like all blood-feeding arthropods, have mechanisms to effectively block the coagulation system of the vertebrates on which they feed. They do this with their saliva which contains a mixture of proteins.

Saliva contains a variable mixture of products, some with a vasodilator and anticoagulant effect, in addition to other proteins, the function of which is still poorly understood, but is probably focused on modulating the innate and acquired immune response of the host or victim.

If we have never been bitten by a mosquito, our immune system will not have developed the antibodies dedicated to fighting these strange chemicals in mosquito saliva and therefore we will not sting. Instead, once the mosquitoes have bitten us, the immune system responds with antibodies. What these antibodies do is stimulate mast cells, another type of cell in our immune system. Mast cells when activated produce histamines. 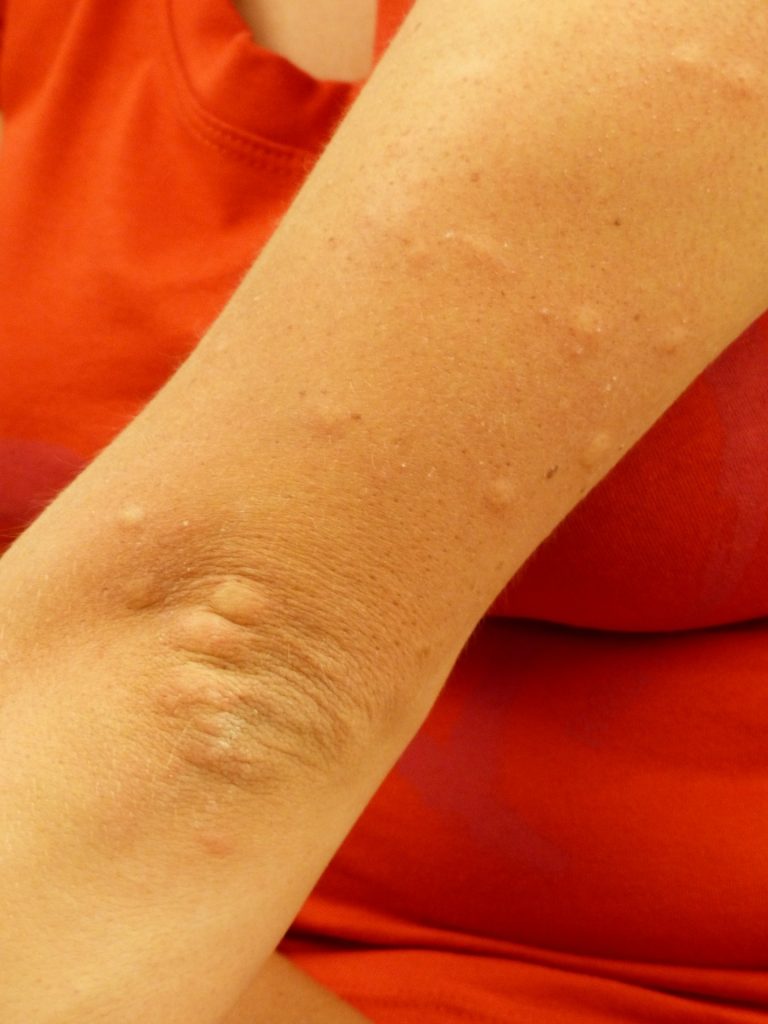 The histamines are directed towards the affected area to destroy the foreign substances and causing the cells of the blood vessels to separate, then the liquids seep into the skin causing a small lump in the skin. This lump activates at the same time other receptors that generate the itch.

In a 2018 study conducted by researchers from the Baylos School of Medicine (Texas), they described the effect of mosquito bites on human cells. The study was carried out with mice in which an immune system similar to that of humans was replicated.

The idea was to study in detail what previous studies had observed: that mosquito saliva improves the pathogenicity of dengue virus, West Nile virus and other arbovirus infections. The scientists hypothesized that mosquito saliva modulates the host’s (human or mouse) immune system in a way that promotes arbovirus replication and transmission.

To do this, the study looked at cytokines, proteins involved in communication between cells when the human body has to prepare an immune response that regulates the number and activity of different types of cells.

“We found that the saliva supplied by the mosquitoes induced a varied and complex immune response that we did not expect,” said co-author Dr. Silke Paust, assistant professor of pediatrics at Baylor and Texas Children’s Hospital.

The results suggest that mosquito saliva alters the frequencies of various cells of the immune system, in multiple tissues, several hours and days after blood suction and saliva injection.

They found that cytokine levels increased dramatically even 7 days after the bite. The fact that these effects last up to a week is especially concerning in the context of allergic reactions. The long-lasting effects seen in the bone marrow and skin cells of altered mice could explain how some of the mosquito-borne viruses might be viable in these tissues, which in turn could serve as replication reservoirs and spread through of them to the rest of the body.

Mosquitoes and the diseases they transmit are a growing public health problem. Understanding how mosquito saliva interacts with the human immune system not only helps us understand the mechanisms of disease pathogenesis, but could also provide possibilities for its treatment.