Who is the tiger mosquito feeding on?

Who is the tiger mosquito feeding on?

Mosquitoes are a recurring topic of conversation on summer evenings. We talk about them when they bite us or when we detect their presence around us and we anticipate that sooner or later their sting will arrive. Mosquitoes bite us, we are aware of them, but do they bite other non-human animals? Just as they bite us, they can bite our pets, or the bird that usually perches on the cables that cross the street. That it bites only us or other animals may seem an irrelevant detail but it is not.

Over the past decades, the burden of emerging infectious diseases has increased worldwide, to become a major threat to the health, safety and maintenance of economies. Covid-19 is a clear example of the health, social and economic impact that the appearance of a new infectious disease can generate. The Zika crisis in 2015 is another example. 75% of emerging diseases have an animal origin, they are what are called zoonotic diseases. Zoonotic pathogens can be transmitted from animals to humans, and from humans to animals, directly or indirectly. Indirect forms require an arthropod to jump from one organism to another, it is here that mosquitoes play an important role.

75% of emerging diseases are zoonotic, pathogens that can be transmitted from animals to humans

A mosquito can act as a bridge, allowing a pathogen that circulates among animals to end up jumping into a rural environment with humans and from there to the urban one (Fig. 1). Whether a species of mosquito can act as a bridge depends on its biology and ecology. It must be a species capable of inhabiting different habitats and ecosystems. To be able to reproduce both in a jungle, a forest, an agricultural area, a garden or a city. And also have a preference when it comes to eating varied. There are opportunistic species that bite a large number of different organisms, and others specialized in biting a few organisms. An opportunistic diet increases the probability of being able to transmit a pathogen from one species to another.

Fig. 1. Mosquito species that inhabit areas where animals and humans live together can act as a bridge in the transmission of viruses and other pathogens between species. The figure represents the different cycles described for chikungunya, a jungle one in which it is transmitted between primates, a rural one in which it can jump from primates to humans, and an urban one in which transmission is between humans mediated by the tiger mosquito and the yellow fever mosquito. Source: Mosquito Alert CC-BY 2.0.

Is the tiger mosquito an opportunist?

The tiger mosquito is an invasive species. Its origin is in the tropical forests of Asia. There the mosquito feeds on wild animals and breeds in tree holes, bamboo stumps, or in rock concavities that can hold water. But his ability to reproduce in artificial containers and having eggs resistant to drying has allowed him to colonize all the continents and domesticate himself until he completes his cycle in large cities. It is found in forest, rural and urban areas.

We know that the tiger mosquito is attracted to humans. We endure their bites for months, but why are other animals attracted to them? It is obvious that humans are not their main source of food in their native forests. In rural settings, it may not either. And in urban settings? A study carried out in the city of Barcelona found that 100% of the analyzed samples of blood in the tiger mosquito belonged to people. However, cities also live other animals, in addition to companion animals, rats, mice, pigeons, sparrows, parrots and other species live. Who does the tiger mosquito bite? Can it act as a bridge transmitting pathogens between species?

The tiger mosquito has a preference for humans

The species has a great capacity to reproduce in a wide variety of environments, both in natural environments and in landscapes modified by human activity. A review of the works that analyze the blood samples obtained from mosquitoes confirms the preference of the tiger mosquito for mammals, which represent 90% of the samples. Within mammals, the preference for humans is clear, we represent 60% of the total samples, while the rest of the species are the remaining 30%. The birds are only 7% and the other vertebrates represent 3% (Fig. 2). 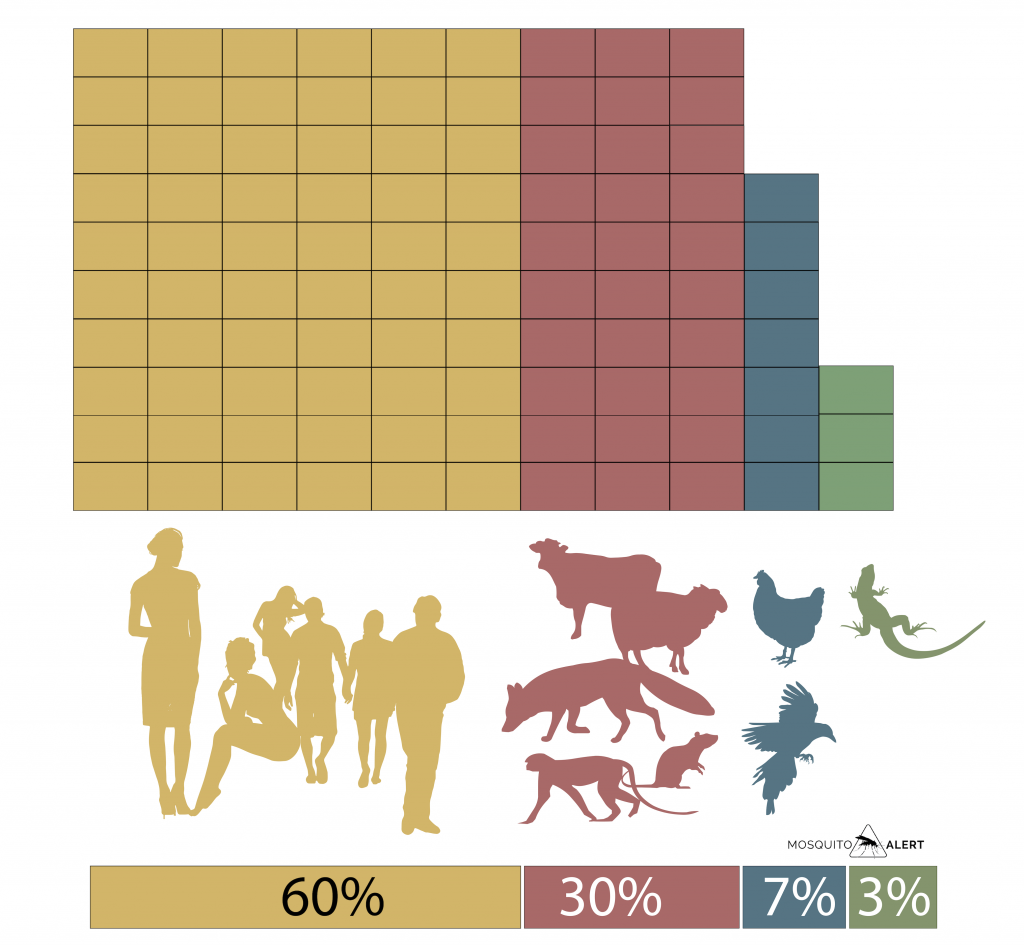 Fig. 2. Percentage of animals that the tiger mosquito feeds on from blood samples. That 60% are human shows their preference for people, 30% are other mammals, and the remaining 10% is shared between birds and other vertebrates (reptiles and amphibians). The percentage is the average of various studies, calculated by Pereira-dos-Santos et al. 2020, Pathogens 9: 266. Source: Mosquito Alert CC-BY 2.0.

When looking at whether the minced animals are domesticated or wild species, it is obtained that the majority are domesticated animals, both dogs and cats, as well as farm animals and birds, where wild animals only represent 10% of the samples (Fig. 3).

Both studies of the blood found inside mosquitoes captured in the field, and laboratory experiments on the choice of mosquitoes, indicate their preference for humans over other animals. However, there is a clear bias in the studies carried out, most of them carried out in rural or urban areas. There is little information on the species’ behavior and feeding habits in more forest and natural environments, or on the flow of individuals from one environment to another. 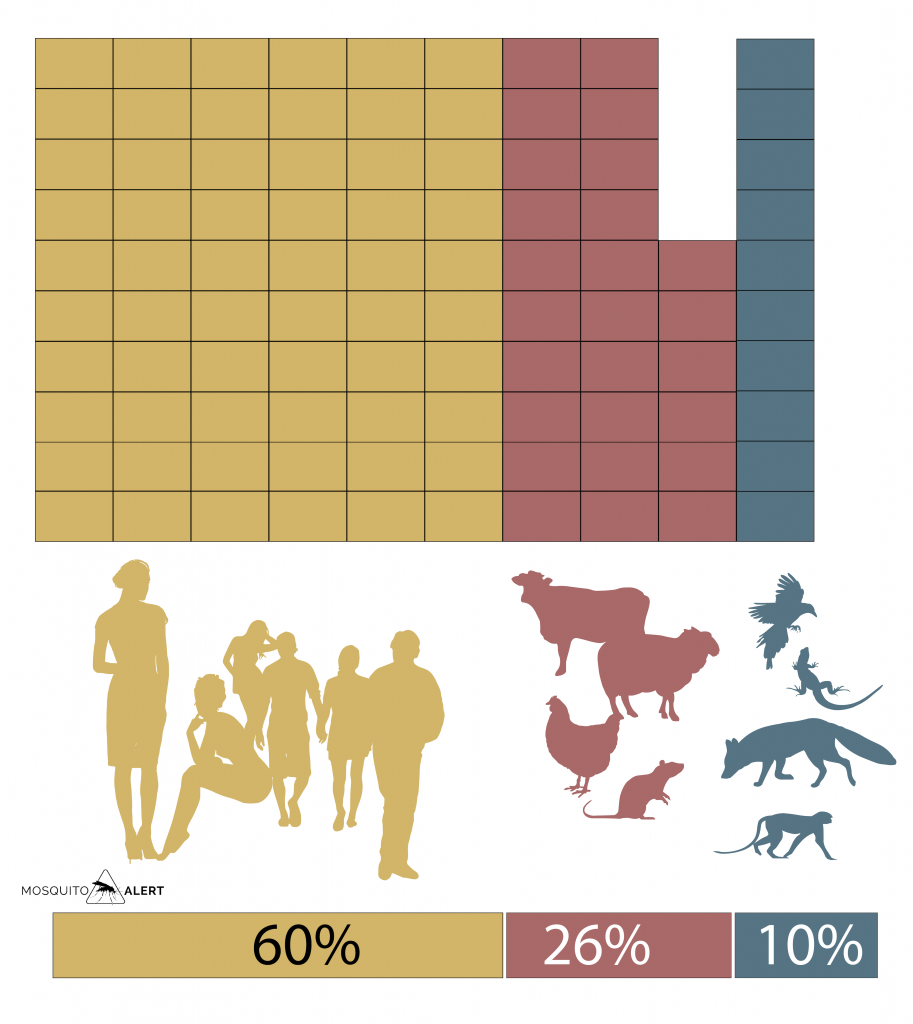 Although the knowledge is biased, the set of works indicates that the mosquito can colonize both forest and rural environments, in addition to urban ones, and that it can interact with domesticated animals and wildlife. This opportunistic behavior in tropical regions of the Congo Basin and the Amazon is a risk, in which the species could act as a bridge and contribute to the spread of a disease present in wildlife to people living in and from the villages. to the cities.

The tiger mosquito is capable of colonizing very diverse environments and interacting with both domesticated and wild animals, in addition to humans.

To date, the tiger mosquito has been shown to be competent for many arboviruses, increasing the risk that it can transmit them from one environment and some species to another, although much knowledge is also lacking in this regard. In the capacity of infection and transmission, it is known that there is a great difference between populations within the species, not only of the mosquito but of the virus. The intraspecific variability of both the mosquito and a virus affect the transmission capacity and alter the risk estimate. To understand and better assess risk, it is necessary to undertake studies with a holistic vision that analyze the whole problem in an integrated way.

It is not enough to monitor viruses present in human populations, it is also necessary to monitor viruses that circulate in domestic animals and wildlife. Understand the human-mosquito interaction, but also those with other animals.