Why Do Mosquitoes Bite Me So Much? Sweat and blood

Why Do Mosquitoes Bite Me So Much? Sweat and blood

You have the sweet blood. That’s how my grandma justified that mosquitoes bite me so much. Every summer I had the same feeling: I took all the bites, my sister none. My sister didn’t seem appetizing to mosquitoes, while I did. It’s because you have sweet blood, my grandma comforted me. An idea that made me give up chocolate and candies for a while, but not even that way. That didn’t make him get less bites.

It was obvious that the quote “mosquitoes bite you because you have sweet blood” was a myth, but that did not change that the mosquitoes had a certain preference for me. Over time I learned that it was not personal, that I am fortunate to belong to the select group of people that mosquitoes consider most appetizing. It’s a reality, some people are true treats for mosquitoes while others not so much.

In fact, it’s a feeling shared by thousands, millions of people. You just have to see the amount of results that Google returns if we write the question: “Why do mosquitoes find me?“, The results obtained are 27,100,000. It is obvious that there are many of us who believe that we are desirable to mosquitoes, but what is true about it?

How do mosquitoes detect us? What makes some of them more attractive than others?

This popular intuition that many of us had, especially those who suffer more from mosquitoes, has been confirmed over time by science: mosquitoes are more attracted to some people than others. Let’s see what is known about it.

Let’s start with the basics remembering that it is only the mosquito females that bite us. They do it to obtain the necessary proteins from the blood to be able to develop their eggs. While the females pierce the skin and suck the blood, the males are dedicated to sucking nectar from the flowers.

It has been confirmed that mosquitoes, and females in particular, identify their potential host by the trace of carbon dioxide (CO2) they leave. Why CO2, you may be wondering, basically because all vertebrates produce it. For a mosquito, being able to detect this chemical compound opens up a wide range of potential hosts.

It has been confirmed that mosquitoes, and females in particular, identify their potential host by the trace of CO2 they leave.

Each time we breathe, humans exhale approximately 4% of CO2, which represents a concentration of CO2ten times higher than that of the environment. Every time we exhale we release a chemical trail into the air that mosquitoes can follow. They have several specific receptors for CO2that allow them to draw a chemical map and follow the trail until they find the emitter (Fig. 1). That is: us.

Fig. 1. A mosquito path to detect its host. Once it has detected a trace of CO2 (a), it flies in a countercurrent zigzag (b) to detect where the trail (c) comes from. When you trace the trail, your visual field is activated (d), and closer stimuli come from other body odors (e) that you just confirmed closer (f). Finally, thermal sensors allow you to locate a good area to land and chop (g). Source: Mosquito Alert ((CC-BY-NC-2.0)

The higher your metabolic rate, the easier it will be for a mosquito to follow your trail. Some mosquitoes can “smell” the source of CO2 at a distance of 40 meters. Although this ability of mosquitoes varies from one species to another. For mosquito species that only bite inside homes, detecting increases in CO2in a confined space is easier. Something important for preferably nocturnal species that are guided mainly by smell and little by sight.

Mosquitoes can “smell” you at a distance of 40 meters

But, not everything depends on CO2. That is only one of the stimuli they use, because, after all, CO2is not only produced by humans, or vertebrates in general, it is also released by trees or, to a greater extent, cars, and nevertheless mosquitoes are not thrown into for them. That is because mosquitoes combine information on the concentration of CO2with other stimuli.

A new study conducted with the yellow fever mosquito, Aedes aegypti, shows that once the mosquitoes have detected a trace of CO2, their visual field is activated to detect the possible emitter. The presence of an attractive smell stimulates the visual activity of mosquitoes. There is a hierarchy: first they smell, then they are activated by visual search. Some studies suggest that being dressed in dark clothes is more attractive to mosquitoes than light colors, although there is little scientific evidence of it and it also depends on the species.

Heat is also an important source of information for a mosquito. Especially for those species of mosquitoes that have adapted to bite humans or other mammals, that is, the mosquitoes that really concern us. Its thermal sensors are able to detect if a body is hot or not, in addition to identifying the hottest body parts that are also the most vascularized. Here too, this can be useful for nocturnal mosquitoes in the interior, since CO2alone is not enough to guide them to the body asleep in bed.

There’s still more. CO2is not the only chemical that “olfactory” guides mosquitoes. As mentioned, CO2is emitted by almost all animals, so those mosquitoes adapted to bite humans should use other mechanisms that allow them to differentiate us from other mammals.

The smell of humans: a sweat of 400 chemical compounds

We humans smell. For the females of some mosquitoes our essences are the most attractive, because they represent the promise of a delicious and bloody meal full of nutrients for the development of their eggs. Mosquitoes have existed since before the appearance of man, but those mosquitoes that throughout the course have specialized in feeding primarily on human blood have developed their sense of smell to be able to distinguish us from other animals.

Scientists have long been trying to decipher what odors they attract. But it is not easy. The millions of years of shared evolution between primates and humans have resulted in the development by mosquitoes of sophisticated navigation systems based on smell (Fig. 2). Mechanisms that change from one species of mosquito to another depending on the environment they inhabit and the preferred host.

Our body odor is composed of more than 400 chemical compounds 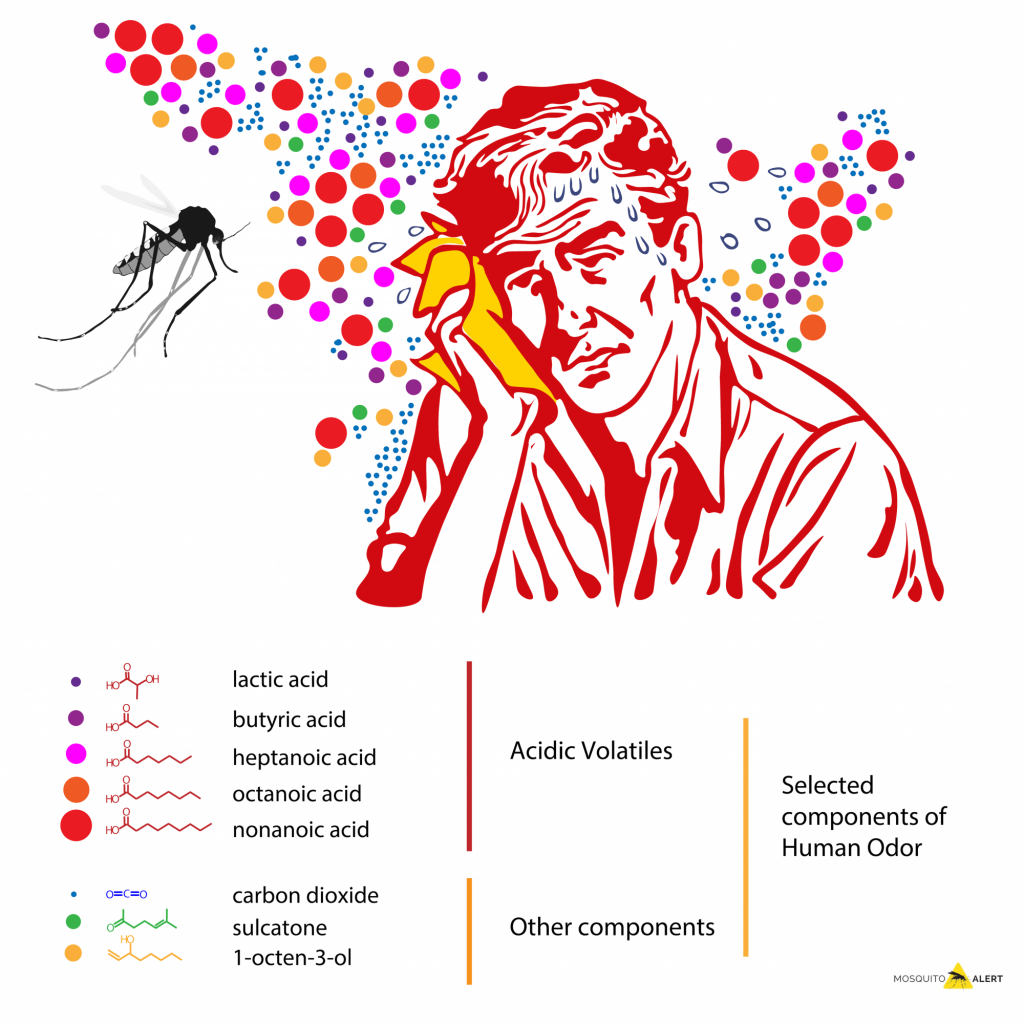 Mosquitoes identify us by our smell, beyond the CO2 that puts them on alert and keeps them on track. And this is where we can find answers to the question, why do mosquitoes like me so much? The smell of our skin varies depending on our personal composition of bacteria. To complicate it further, different species of mosquitoes have their own tastes. It has been seen that Aedes aegyptifinds human lactic acid tremendously attractive, but not that of other mammals. In contrast, for malaria-transmitting mosquitoes, Anopheles gambiae, lactic acid is not very palatable.

Genetically modified mosquitoes to know how they smell

Our body odor is composed of more than 400 chemical compounds, knowing which of them or which combination of them is attractive to a mosquito is not an easy task. Gradually, however, researchers are revealing the mechanisms that may have been involved. For example, a recent study has confirmed that mosquitoes have specific receptors in their antennae sensitive to our sweat compounds.

The work explains how Aedes aegypti mosquitoes use the volatile acidic compounds of human sweat to detect us (Fig. 2). They have proven it by generating mutant mosquitoes that have been altered by the gene responsible for the antenna sensor. Doing that has been like covering the mosquito’s nose. Mutant mosquitoes were unable to detect and be attracted to the lactic acid of human sweat. Only half of the mutated mosquitoes found who to bite in the laboratory.

As we see, the stimuli that lead a mosquito to bite one or the other are many and complex, giving rise to some being more attractive than others. They still do not understand what the mosquitoes of each species like most, but scientists are making progress on it.

Deciphering which substances or combination of conditions are irresistible to mosquitoes has a lot of practical interest. On the one hand, it would allow the development of perfect traps to attract mosquitoes that transmit diseases. On the other, to design repellents that made us invisible to mosquitoes covering up what attracts them from us.

Do mosquitoes feel preference for any blood group?

Finally, to say that my grandma maybe, after all, was not so wrong. They don’t bite me anymore for having sweeter blood than my sister, but blood also plays its part. Mosquitoes are more attracted to some blood groups than others. It has been seen that the Anopheles gambiaemosquito shows attraction for type 0 blood. The yellow fever mosquito, Aedes aegypti, also has a preference for group 0 blood. The tiger mosquito, Aedes albopictus, feels the same preference for group 0.

So, having fresh blood or not does not seem to matter to a mosquito when selecting who to bite, but the person’s blood group does. The results of the preference for blood groups must be taken with tweezers, so far little or very little is known about it. What we do have evidence is the use of CO2mosquitoes and body odor to select who to bite.

Gillies MT. (1980) The role of carbón dioxide in host-finding by mosquitoes (Diptera: Culicidae): a review. Bulletin of Entomological Research 70: 525-532

Wood CS. (1974) Preferential feeding of Anopheles gambiaemosquitoes on human subjects of blood group 0: a relationships between the AB0 polymorphism and the malaria vector. Human Biology 46: 385-404