The first major outbreak in 2007 on the island of Yap in the Pacific, a total of 86 countries have reported cases of Zika infected by mosquitoes. Evidence of transmission and outbreaks has been recorded in tropical areas of Africa, America, Asia and the Pacific. The number of people affected during these outbreaks is unknown, but in the 2015-2016 outbreak in Brazil, 712,000 possible cases were reported. Few cases have been reported in Asia, but studies suggest that 800 million people are at risk of contracting the virus.

Although the cases of infection have decreased since 2017, the virus continues to circulate in America, Asia, Africa and the Pacific.

Zika is caused by a virus from the Flaviviridae family. The Zika virus (ZIKV) is genetically related to dengue virus (DENV). Three different lineages have been identified. Two were first identified: an African I lineage and an Asian lineage. A second lineage was later found in Africa that has been named African lineage II. The Asian lineage is the one that has spread throughout much of the American continent.

It has been estimated that 80% of infected adults are asymptomatic, they do not present any type of symptoms. In children and adolescents, the percentage of asymptomatic patients is lower, 30%. People who show symptoms usually do so within two weeks of being infected.

Symptoms are generally mild, with fevers and rashes that usually last 2 to 7 days. Other symptoms that may be present are conjunctivitis, muscle and joint pain, severe headaches, and exhaustion. However, Zika virus infection has been found to be associated with neurological, ophthalmological, and microcephaly complications in fetuses and newborns.

A relationship between Zika infection and Guillain-Barré syndrome has been observed. This syndrome is a rare condition in which a person’s immune system attacks its own nerves. The syndrome has been detected in both some adults and children within a week of being infected with the virus. It has been suggested that the Zika virus triggers an immune system response that ultimately affects the nerves. Between 10% and 50% of the cases that develop Guillain-Barré syndrome require hospitalization.

One risk group for Zika infection is pregnant women. Microcephaly is the main concern for pregnant women diagnosed with Zika. Microcephaly is a condition in which the baby’s head is smaller than that of other babies of the same age and sex. It occurs when there is a problem in the uterus that prevents normal brain growth. The chances that a mother infected with the virus during pregnancy will give birth to a baby with microcephaly is 0.04%, much higher than the normal microcephaly rate of 0.001%. 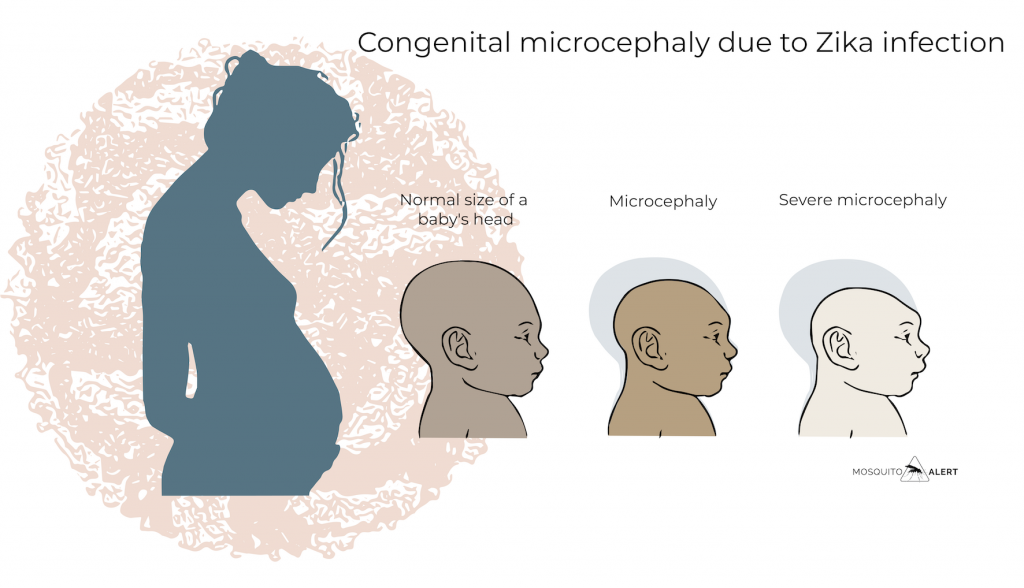 In addition to congenital microcephaly, other manifestations have been reported in babies who have been exposed to the Zika virus in utero. These include head malformations, involuntary movements, seizures, irritability, brainstem dysfunction, trace problems, hearing and visual abnormalities, and brain abnormalities. Other outcomes associated with Zika virus infection in the womb may include spontaneous abortions. All these congenital anomalies associated with the exposure of the fetus to the virus during pregnancy are known as “congenital Zika virus syndrome”.

Among them are ophthalmologic abnormalities that affect babies whose mothers were infected during pregnancy. The most commonly detected abnormalities affect the retina and the optic nerve. A very high percentage of babies born with microcephaly also have some type of eye abnormality. It is not yet known to what extent these problems are associated with virus infection or linked to microcephaly, since babies with microcephaly who have not been exposed to the Zika virus also tend to present these types of ophthalmological problems.

There is no treatment available to treat Zika virus infections or its associated illnesses. For people with mild symptoms, such as fever or rashes, rest, drink fluids, and treat pain and fever with common medications are recommended.

The World Health Organization (WHO) recommends that pregnant women who live in areas where Zika is transmitted, or who develop symptoms of Zika infection, seek medical attention for laboratory tests and clinical care.

The main mosquitoes implicated in most outbreaks of Zika have been the yellow fever mosquito (Aedes aegypti) and the tiger mosquito (Aedes albopictus). However, in the outbreaks that have taken place in the Pacific, the transmitting mosquitoes have been Aedes hensilli and Aedes polynesiensis. It is considered that Aedes aegypti and Aedes albopictus have a low vector capacity, that is, they have little capacity to become infected by the virus and to transmit it to other people. However, they end up being the most important vectors due to their association with human populations, the density of their populations, the number of bites they make and their longevity, among other factors.

Although the main route of transmission is through a mosquito, it has been proven that the virus can be transmitted by other routes. The virus has been shown to have the ability to be transmitted from a mother to his fetus during pregnancy, with virus and RNA particles having been detected in the fetus’ amniotic fluid. A mother can infect her fetus during pregnancy or during childbirth..

The virus has been detected in breast milk and some cases of infection have been reported in nursing babies, but in no case have these babies suffered health problems, the benefits of breastfeeding being greater than the risks of transmission.

It has also been detected in semen samples, and it has been shown that it can be transmitted sexually, from one person to another. Transmission can occur even if the infected person has no symptoms. A person can transmit the virus before symptoms appear, when they have symptoms, and even after symptoms are gone. It is known that the virus can remain in semen for longer than in other body fluids, such as urine and blood.

Zika in the world

Since the virus was first identified in humans in 1952 in Uganda and Tanzania, outbreaks have been identified in different tropical areas of Africa, Asia, the Americas and the Pacific. Throughout the 20th century there were only sporadic outbreaks, but in 2007 the first major outbreak occurred on the island of Yap (Federated States of Micronesia). In 2013, another large outbreak occurred in the Pacific, this time in French Polynesia. In 2015-2016, a large epidemic outbreak affected Brazil and other South American countries.

In 2019, a report by the World Health Organization (WHO) stated that a total of 87 countries and territories had evidence of autochthonous cases of Zika due to mosquito transmission. The map shows the countries with the highest risk of Zika and the virus lineages: (1) African lineage I, (2) African lineage II, and (3) Asian lineage.

Only imported cases of travelers had been detected in Europe until 2019. That year, the first three cases of autochthonous transmission were detected in the city of Hyères, in the French department of Var. They were three neighbors who had not traveled to any place where Zika is endemic, the first evidence of Zika transmission in Europe related to the presence of the tiger mosquito, Aedes albopictus.

All studies carried out with populations of tiger mosquitoes in Europe demonstrate their low capacity to become infected and transmit the Zika virus, suggesting that the risk of transmission by mosquitoes in Europe is generally low. The probabilities are highest in the last months of summer and early October when there are a greater number of tiger mosquitoes. Although, to date, only one locally transmitted event has been detected with three cases, in the 2015-2019 period there were 25 cases of sexual transmission from infected travelers abroad, infecting their partners in Europe.

Origin and history of Zika

The Zika virus was discovered in 1947 by Alexander Haddow and George Dick while investigating the circulation of the yellow fever virus among rhesus macaques in Uganda. It was in these primates that the virus was first identified. Later, the virus was isolated from Aedes africanus mosquitoes captured in the same area. The first human case was not detected until 1954 in Nigeria, although there are doubts as to whether it was the Zika virus or the Spondweni virus. The first confirmed human case occurred in Uganda in 1962. Over the next several years, the virus was documented in mosquitoes and people in West Africa.

Outside of Africa, the virus was observed in Asia in 1966. It was found in yellow fever mosquitoes (Aedes aegypti) in Malaysia. In 1977 the first human infections appeared in Indonesia. Different studies suggested that the virus was widely distributed in Africa and Asia. The virus is believed to have been silently circulating among humans, animals, and mosquitoes in these tropical regions for at least 70 years.

During its first 60 years, since it became known, no epidemic episode was reported. In six decades, no more than 20 human infections were recorded. However, in 2007, the island of Yap (Federated States of Micronesia) suffered the first Zika epidemic. It is estimated that there were at least 5,000 cases that year, representing 75% of the population, although all of them had only mild symptoms.

The virus appeared to disappear again until October 2013, this time in French Polynesia and other Pacific territories. There were more than 30,000 cases, some with neurological complications. The data suggest that the virus was introduced in Brazil that year or in 2014 from the Pacific, although the epidemic did not become visible until 2015. In Brazil, the first cases of microcephaly among newborn babies were observed during 2016. From Brazil the virus spread rapidly throughout the American continent. According to the WHO, in February 2017, 2,654 cases of congenital Zika were detected in America, of which 2,366 in Brazil. 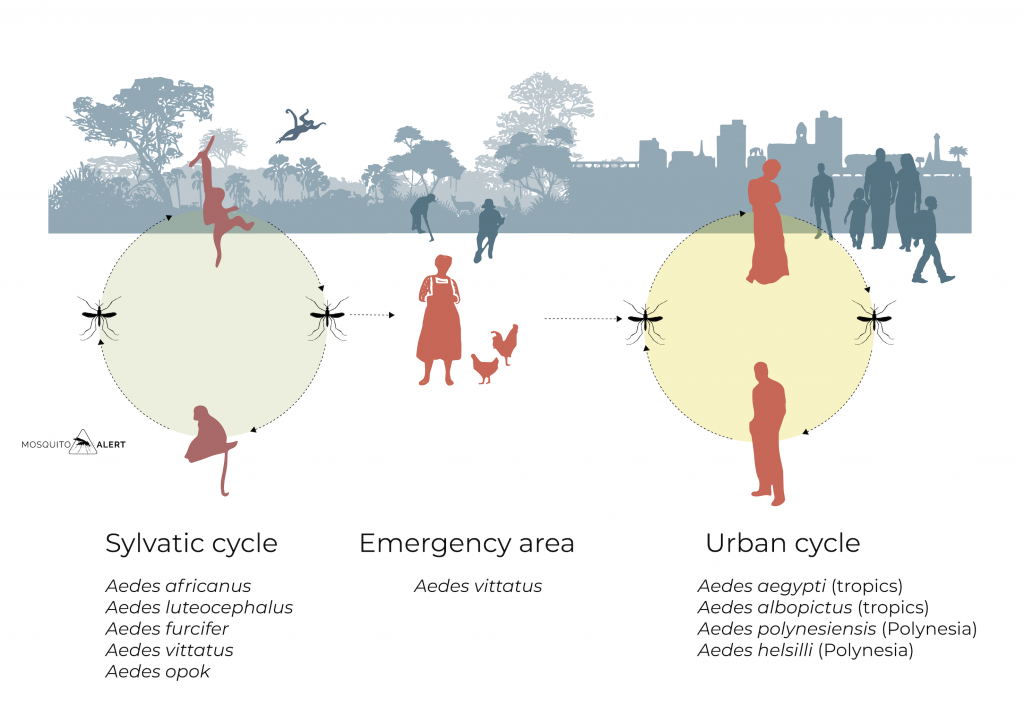 Until. 2007 only had documented jungle cycles of the Zika virus. In Africa, its presence had been detected in several species of non-human primates, as well as in the mosquito species Aedes, Aedes africanus, Aedes luteocephalus, Aedes opok, Aedes apicoargenteus, Aedes vittatus and Aedes furcifer in different African countries. In rural areas, the presence of Aedes vittatus infected with the virus has been confirmed, suggesting that it could be the vector in the emergency zone, from the jungle cycle to humanized environments. 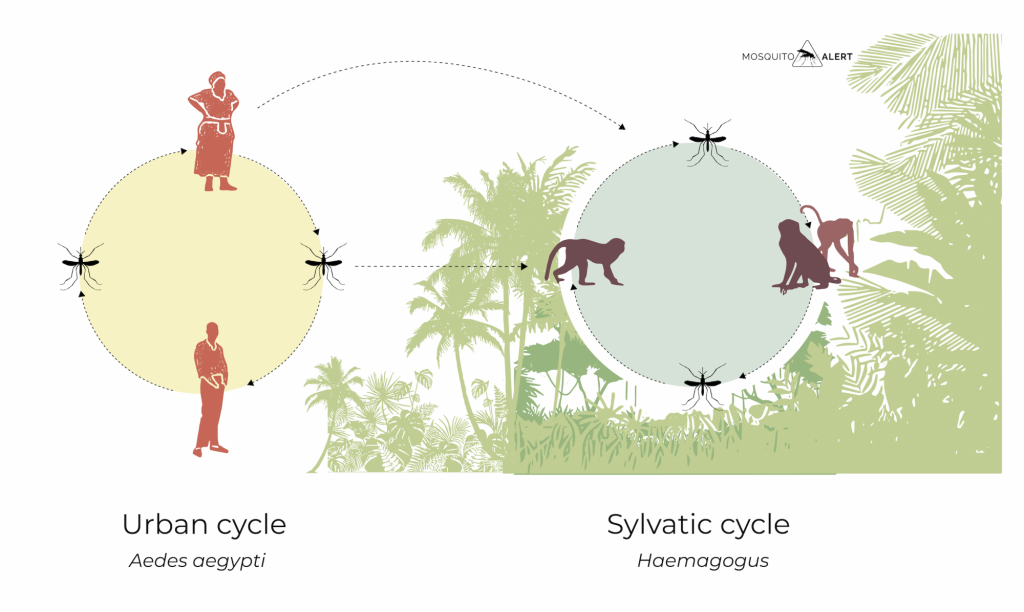 The spread of the virus in Asia and America has allowed the process to be reversed. Although the virus tends to jump from a jungle cycle to a rural or urban cycle, the entry of the virus directly into urban cycles makes it possible that in regions where there are primates or other susceptible animals, the virus manages to spread to rural environments and even jungle cycles are established. The establishment of a jungle cycle in a region can make eradication of the disease very difficult, since from forest areas there is always the risk that the virus will re-emerge even if it has been controlled in cities.

In South America, several primate species (Atelidae, Callitrichidae, and Cebidae) have been identified with Zika antibodies suggesting that they were infected with the virus during the 2015-2016 outbreak. Although it has not yet been demonstrated that jungle cycles have been established in the American continent, the risk exists and the transmission capacity of native jungle mosquitoes that could maintain said cycles is largely unknown.

Saiz JC, Martín-Acebes MA, Bueno-Marí R. et al. 2017. Zika virus: what have we learnt since the start of the recent epidemic? Frontiers in Microbiology 8: 1554

Siraj AS, Perkins TA. 2017. Assessing the population at risk of Zika virus in Asia. Is the emergence really over? BMJ Global Health 2: e000309