“The most destructive pathogen for biodiversity that has ever existed” has come to be described as the chytrid fungus (Batrachochytrium dendrobatis) that has caused the decline of at least 500 species of amphibians around the world. Of these 500, the pathogen could be involved in the extinction of almost a hundred of them. It is the pandemic that frogs and toads around the world have suffered for decades.

The fungus (Bd) that sickens and kills many amphibians has proven to be a devastating invasive species. Its expansion is explained by globalization and the trade in wild species that has allowed the pathogen to reach new areas. Originally from Asia, today it is detected practically everywhere. There is no corner of the world where it is not present, it has managed to penetrate even relatively remote regions and with hardly any human transit. The fungus has particularly affected species in the tropical regions of America, where one third of the 8,000 known species of amphibians are concentrated. The tropical region of the Andes and the forests of Central America have been the most affected, while the Eurasian species are adapted to the fungus and have greater resistance to its infections. 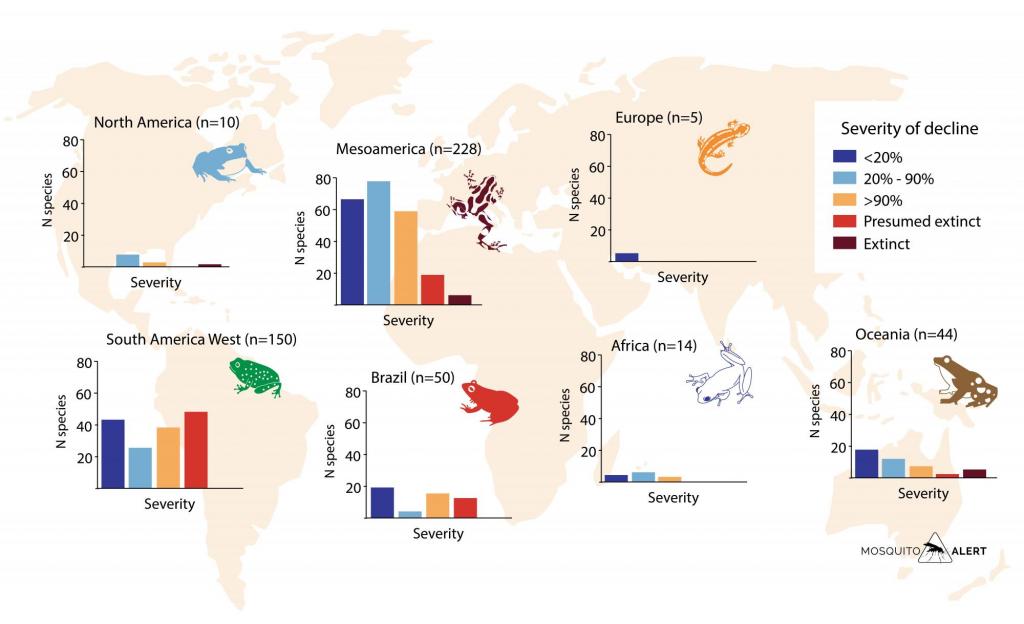 Fig. 1. Species affected by the chytrid fungus (Bd) in different regions of the world. The colors indicate the severity of the effects of the fungus on the species, from a population reduction of less than 20%, to a greater reduction of up to 90%, a drastic reduction of more than 90% of its numbers, and in some cases the confirmed or suspected extinction of some species. Figure modified from the original of Scheele et al. 2019. Science 363: 1459-1463. Source: Mosquito Alert CC-BY

What does all this have to do with mosquitoes, you may be wondering. Everything. It has always been known that frogs and toads feed on small insects, especially those linked to aquatic environments where amphibians also carry out part of their activity. So what are the consequences of reducing amphibian populations? The easy thing is to think that less frogs more mosquitoes. It seems logical, but in ecology, the relationships are rarely direct. Food webs are just that: webs. Complex systems with many interactions, where it is difficult to establish the effects of a single element. Even more so to predict what the effects will be. However, the decline of amphibians has been shown to directly affect human health.

Chytrid fungal disease traveled to Costa Rica and Panama in the early 1980s. Throughout the 1980s and 1990s many species collapsed in both regions, a period that was followed by a considerable increase in malaria cases. By analyzing the data series of malaria cases and the dynamics of amphibian populations, the researchers found that the significant increase in malaria cases began to occur between five and six years after amphibian deaths were documented. 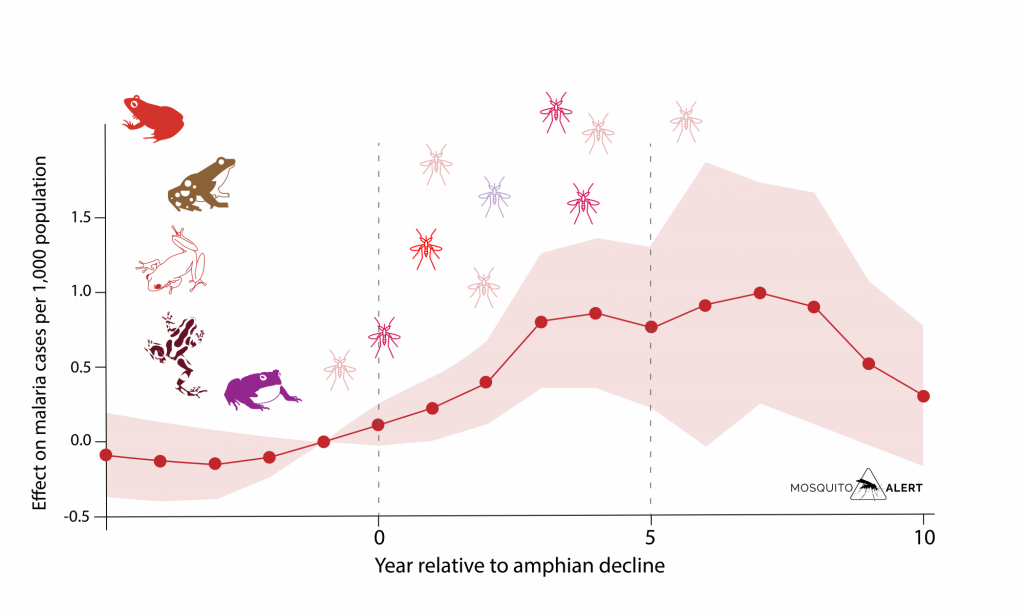 Fig. 2. Estimated effect of the decline of amphibians in Costa Rica and Panama on the number of malaria cases per 1,000 inhabitants (vertical axis). The significant increase occurs within five years of detection of the amphibian decline. The shadow represents the 90% confidence interval. Image modified from the original of Springborn et al. 2020. medRxiv 2020.12.07.20245613. Source: Mosquito Alert CC-BY

In 1980 the two countries had no more than 1,000 cases of malaria. In the mid-1990s, Costa Rica registered 7,000 cases. Panama reached 5,000 in the mid-2000s. Later, malaria cases fell again, due to the management and control actions that were carried out in the face of the increase in cases. The study, which is still pending review, shows how the loss of biodiversity can directly affect human health. In the end it seems that the expected chain reaction is fulfilled: fewer frogs give rise to more mosquitoes and these to more cases of malaria.