Aedes aegypti is the mosquito known as the yellow fever mosquito. Like the tiger mosquito (Aedes albopictus), it belongs to the Aedes genus, and these two are closely related. Entomologists are always prepared to remind us that in fact, both belong to an Aedes sub-genus called Stegomyia (derived from ancient Greek stegos: under the roof, and myria: fly).

Adult Aedes aegypti are small and dark brown colored with white lines covering the body and legs. Their appearance is similar to the tiger mosquito (Aedes albopictus) but are in fact a bit different. They are differentiated from other species by 4 lines of white scales in the shape of a lyre on the dorsal side of the thorax.

The following images serve to compare the thorax of Aedes aegypti (four lines in the shape of a lyre) with that of Aedes albopictus (a single white line on the thorax). 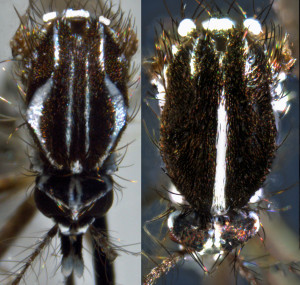 The yellow fever mosquito generally bites during the day but may also bite at night. It has a high preference for people, even greater than the tiger mosquito, but it can also bite other mammals, usually domestic animals. Like other mosquitos, only the females bite, needing blood to develop eggs.

Originally, the yellow fever mosquito (Aedes aegypti) lived in forested environments and used holes in trees with accumulated rainwater to breed. Just like its cousin the tiger mosquito, over the years it has adapted to urban areas and breeds in any microenvironment with stagnant water such as water drains, containers, or tires.

It is a vector of diseases

The yellow fever mosquito (Aedes aegypti) can transmit diseases between people or between animals and people, for this reason it is called a disease “vector.” Most of the diseases transmitted by this mosquito are caused by viruses. The most noteworthy of these are yellow fever, the dengue virus, the chikungunya virus, and the zika virus.

Where is Aedes aegypti found?

A species of African origin, its distribution has always been associated with human movement and trade. From Africa, it was introduced into the Americas around the XVI-XVII centuries with the slave trade. The trade of goods from the New World introduced the species into Europe numerous times, becoming established throughout the Mediterranean, and between 1700 and 1850 it caused severe epidemics of yellow fever and dengue, causing hundreds of thousands of deaths. 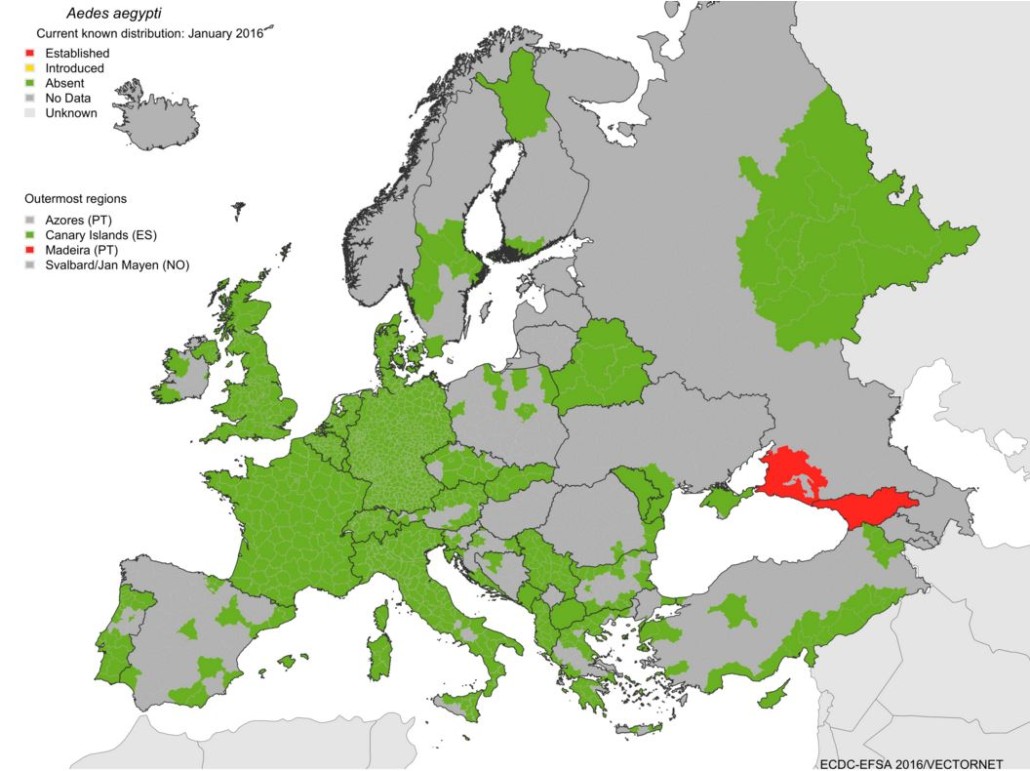 Later, the mosquito somewhat spontaneously disappeared, but in the last 25 years its distribution has again increased due to globalization. It is now found in Africa and tropical or subtropical countries, especially in Northern Brazil and Southeast Asia including India. It is also found in the Southeast United States and in Northern Australia.

Unlike the tiger mosquito (Aedes albopictus), the yellow fever mosquito (Aedes aegypti) is not capable of entering into diapause to withstand winter while in the egg phase. This limits its ability to colonize northern temperate areas.

However, it could become established in European regions with a humid subtropical climate (parts of Mediterranean and Black Sea countries) such as the Sochi region (Black Sea coast), where it became established in 2001. In 2005 it also became established on the island of Madeira, where it has already caused a dengue epidemic, becoming a major source of worry for Spain and the Canary Islands. Recently, the Canarian Government has announced the finding of some individuals of yellow fever mosquito at the Fuerteventura island, according to the Entomological Surveillance System actions.