Viruses transmitted by mosquitoes, such as dengue, chikungunya or Zika, are one of the most important threats to public health. As there are no vaccines or effective pharmacological treatments available for most of these viruses, control of vector mosquitoes is the best means to reduce the incidence of these diseases. The tiger mosquito, Aedes albopictus, one of the species capable of transmitting these viruses, has expanded in recent decades throughout the world occupying densely populated urban environments.

Last week an article was published describing a new control strategy that has almost completely eradicated tiger mosquito populations from two small Chinese islands. The success of the action is due to the combination of two control techniques, which for the first time have demonstrated their effectiveness in a field experiment, stimulating future approaches to address the control of disease-transmitting mosquitoes.

The study carried out over a period of three years has managed to reduce the populations of tiger mosquitoes by 94% in two small river islands of the Chinese city of Guangzhou. The strategy followed by scientists from the Sun Yat-sen University in Guangzhou, who have published their results in the journal Nature, has been to combine two control techniques.

One of them is the release of sterilized mosquitoes. This technique has been useful to combat other insect pests, but in mosquitoes their success has always been limited. Although males sterilized with X-rays continue to maintain the ability to mate with females of the wild population without leaving offspring, they present a success of mating less than that of non-irradiated male mosquitoes. Making in practice the effectiveness of the technique is low.

The second technique is to infect mosquitoes in the laboratory with the Wolbachia pipientis bacteria and subsequently release them in the wild. Wolbachia bacteria are found naturally in many species of insects, some say that more than half of the insects are carriers of this bacterium, being the tiger mosquito among the species normally infected by this bacterium. There are many different strains of the bacteria, and their effect on populations depends on the strains used.

Wolbachia bacteria live inside mosquito cells, being located mainly in the gonads, is transmitted to the offspring and can affect the reproduction of the species. However, for the reproduction of mosquitoes to be affected there must be an incompatibility between the variants of the bacteria carried by the female and the male.

In fact, tiger mosquitoes from wild populations on the islands of Guangzhou are naturally infected with two variants of the bacteria without any effect on the viability of individuals or their offspring. Therefore, the researchers infected a large number of mosquitoes in the laboratory with a third variant of the bacterium that is not found in the populations of the Guangzhou islands. In fact, it is a variant obtained from another species of mosquito: Culex pipiens. When male mosquitoes infested with the third variant mate with wild females that have a different combination, eggs cannot develop and never hatch (Fig. 1). 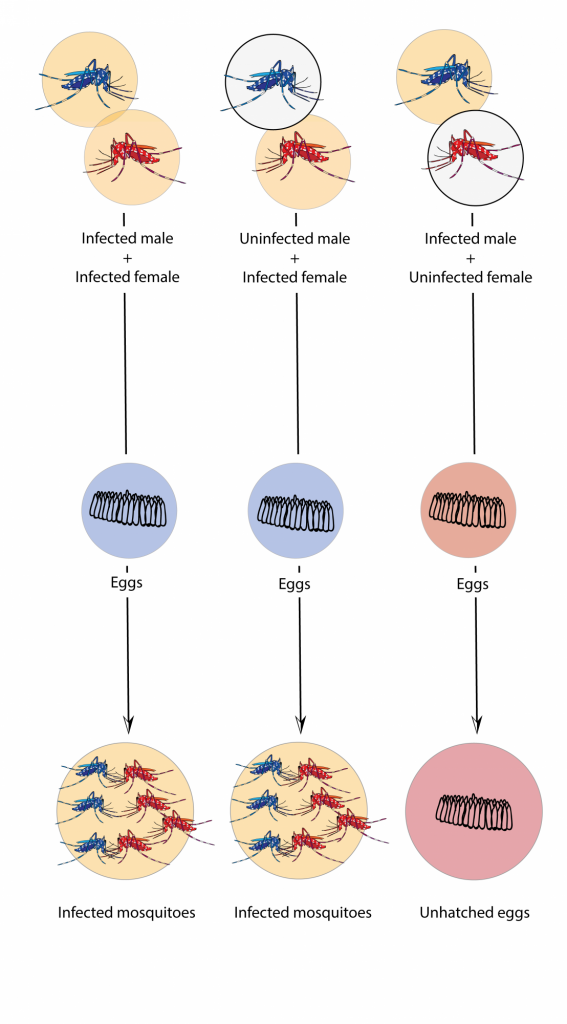 Fig. 1. Eggs are only unfeasible when the male is infected and the female is not, or when both have a different and incompatible variants. In other cases mosquitoes reproduce without problems despite being infected with the bacteria. Source: Mosquito Alert (CC-BY-NC-2.0)

The advantage of using Wolbachia bacteria with respect to the release of sterilized males is that individuals infected with the bacteria are not affected by their mating ability competing for wild females on equal terms as untreated males. Several experiments had already been carried out in different countries releasing mosquitoes from Aedes aegypti infected with Wolbachia with relative success.

Combination of both methods of control

But there is a crucial point in the success of using the bacteria: that males and females have different varieties of the bacteria to prevent the development of the offspring. The infeasibility of eggs, the result of the difference between males and females, is known as “cytoplasmic incompatibility“, in which the sperm of infected males causes the infertility of uninfected or infected females with a different variant (Fig. 1).

That implies that if males and females infected with the same varieties of the bacteria are released they could replace the natural population but the mosquito problem would continue to persist in the area, and could even hinder future attempts to eradicate populations using a Wolbachia control method. The major innovation of the study has been the method developed to prepare the altered population they wanted to release.

To date, the technique of using males infected with Wolbachia, was limited by the difficulty of generating thousands of infected males and discriminating against females. In the laboratory, the mosquitoes were separated based on the size of their pupae, but given the imperfection of the system, it is necessary for people to end up discriminating whether a pupa will eventually lead to a male or female mosquito. A laborious and slow task that limits the number of individuals that can be released in nature, requiring hundreds of thousands to affect a wild population.

It is at this point, where the Chinese researchers decided to combine the two techniques described. After infecting and breeding in the laboratory a large colony of tiger mosquitoes with the third variant of Wolbachia, they exposed the mosquitoes to low levels of radiation that managed to sterilize the females, but only slightly reduced the ability of the males to mate.

In this way, they were able to release more than 160,000 mosquitoes infected with the third variant of Wolbachia per hectare each week in the residential areas of the two river islands of Guangzhou, during 2015, 2016 and 2017 (Fig. 2). With this action they hoped to reduce the population dramatically of tiger mosquito and with it the dengue rate. The city of Guangzhou is the city with the highest dengue transmission rate in China. 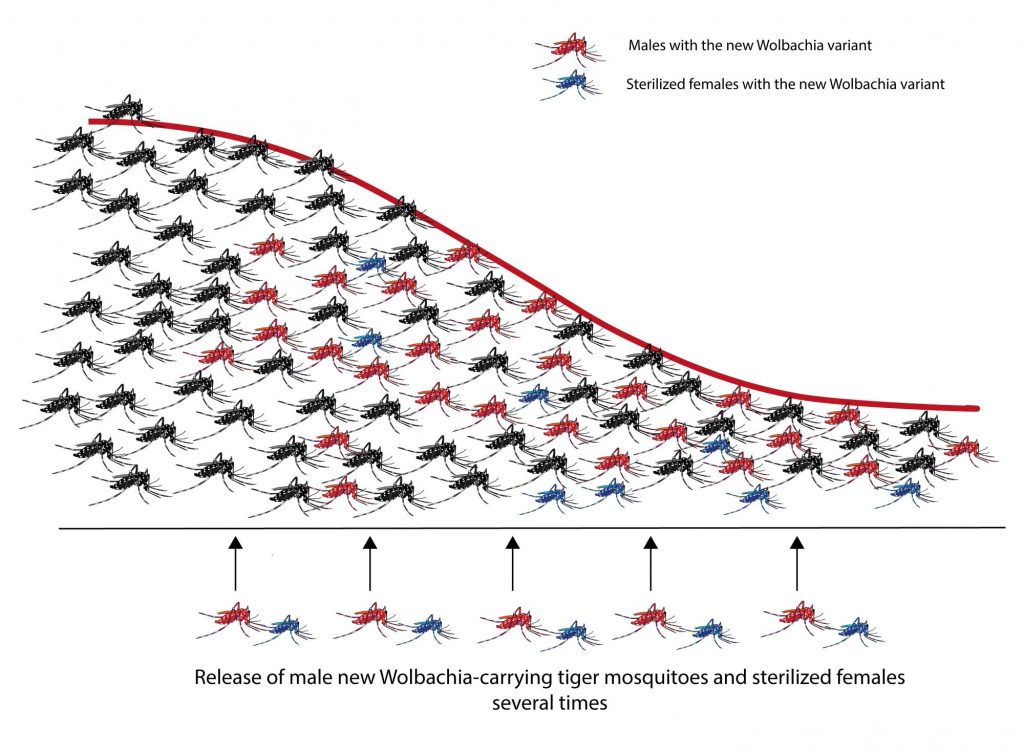 Fig. 2. Reduction of the wild population of tiger mosquito after successive releases of infected males with Wolbachia and infected and sterilized females. Source: Mosquito Alert ((CC-BY-NC-2.0)

In the 2015-2017 period, researchers were able to verify the reduction of mosquito populations in both islands. The wild females that mated with the males infested in the laboratory produced unviable eggs, while on the other hand, the wild males that mated with the sterile laboratory females did not produce offspring either. The combination of both actions resulted in the number of adult females in 2016 being reduced by 83% and in 2017 it was reduced to 94%.

Is a long-term viable strategy? Is applicable in other areas?

In view of the results published in the journal Nature, the technique is effective in small regions, also relatively isolated, as is the case of small river islands where its effectiveness has been proven. The challenge for the future is to study how to make this technique effective in large continental regions and with a continuous flow of mosquitoes from other regions.

There are great doubts about the long-term sustainability of the strategy followed. Immigrant mosquitoes from adjacent areas will likely restore the original population once the release of altered mosquitoes ceases. More in a species like the tiger mosquito that owes its successful expansion to the ease it has to passively propagate with human means of transport.

It remains to be resolved if, in the future, the techniques used to overcome the financial and logistical challenges that they currently involve can be perfected, so that they can be implemented on a larger scale that covers an important metropolitan area. The study represents a breakthrough that shows the potential of new tools in the fight against mosquito-borne diseases.