In less than 40 years, the tiger mosquito, originally from Southeast Asia, has managed to invade all the continents except Antarctica. This dispersal and colonization capacity is explained by the ability of their eggs to withstand both desiccation and low temperatures. Characteristics that have allowed it to reach temperate regions and thereby increase the risk of transmission of typically tropical diseases such as dengue, Zika or chikungunya in these areas. In Croatia, France, Spain and Italy, local outbreaks of dengue and chikungunya have been detected in recent years, attributed to the presence of the tiger mosquito.

To reduce both nuisance and the risk of disease transmission, surveillance and management programs are carried out, usually focusing on the control of breeding sites and the application of larvicides that prevent larval development. The use of insecticides to kill adult mosquitoes is only recommended in places where there is transmission of one of the diseases or a very high risk of transmission. The only authorized insecticides in Europe are based on pyrethroids, a substance that interferes with the mosquito’s nervous system. The efficacy of these products is being compromised by an increase in insect resistance to pyrethroids (Fig. 1). 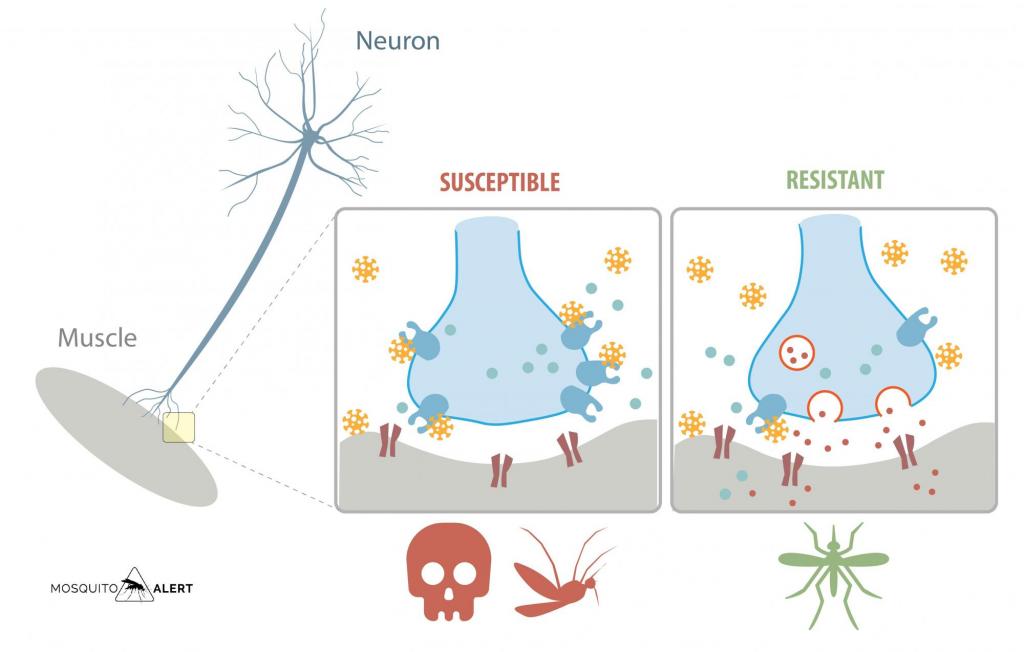 Fig. 1. The toxic effects of pyrethroids (yellow molecules) are mediated by preventing the closure of voltage-gated sodium channels (blue channels) in the axonal membranes of insect neurons. The sodium channel is a membrane protein with a hydrophilic interior. This interior is precisely shaped to allow sodium ions to cross the membrane, enter the axon, and propagate an action potential. When the toxin maintains the channels in their open state, the nerves cannot repolarize, leaving the axonal membrane permanently depolarized, paralyzing the organism and causing its death. Mosquitoes with which mutations have fewer sodium channels, which means that pyrethroids (yellow) can’t bind to them and keep the channels permanently open, allowing the normal release of neurotransmitters (red and blue circles). Source: Mosquito Alert CC-BY, modified from Kubik et al. 2021. Scientific Reports 11: 7301.

In the case of the tiger mosquito, several mutations linked to greater resistance to pyrethroids have been detected, including the alleles: 1534C, 1534S and 1016G, the latter being the one that confers the highest levels of resistance. To date, this mutation had only been found in Italy, but a new study carried out in the framework of the AIM-COST Action (in which members of the Mosquito Alert Digital Entomology Network and ReNED have participated, including Sarah Delacour Estrella , Daniel Bravo Barriga and Francisco Collantes Alcaraz) has updated the presence and distribution of this mutation in the continent.

Genetic analysis of 2,530 tiger mosquitoes from 69 locations in 19 European countries has shown that the mutation is widely distributed throughout the region (see map, based on original data in Pichler et al. 2o22. Parasites & Vectors 15: 280). It has been identified in 12 locations in 9 of the 19 countries analyzed, with frequencies ranging between 1 and 8%. Two groups have been identified: a western one, especially on the coast of Italy, France and Malta, as well as in a locality in Spain and another in Switzerland, with the presence of the 1016G mutation; and an eastern bloc encompassing different Balkan countries, Turkey and Georgia. “This study represents the first effort to map the V1016G mutation on a continental scale in Europe” says Daniel Bravo Barriga, from the University of Extremadura, adding that “the map, which will be updated with new data, is an easy and useful to public health officials and private companies involved in mosquito control.”

The results show that the mutation that confers resistance to pyrethroid insecticides is widely spread throughout Europe, both in the westernmost and easternmost areas, although the frequencies detected are lower than those previously documented in Italy, where use has been made. longer duration of pyrethroids that has ended up favoring the selection of the most resistant individuals. The authors of the studies suggest incorporating genetic analyzes into surveillance programs to detect the presence of resistant individuals in time, as they represent a powerful system for detecting early signs of resistance in populations, which would allow the implementation of other control measures that would prevent a increased resistance thus reducing the effectiveness of insecticides. Sarah Delacour Estrella, a researcher at Quimera Biological Systems and the University of Zaragoza, stresses that "the results are interesting to promote a responsible use of biocides, since incorrect use can lead to the loss of tools that we can use in the event of actions of emergencies after the appearance of epidemic outbreaks of diseases transmitted by mosquitoes".