Climate change accelerates the spread of the yellow fever mosquito

Climate change accelerates the spread of the yellow fever mosquito

The spread of disease-transmitting mosquitoes is primarily a product of globalization, with a long history behind it. The yellow fever mosquito (Aedes aegypti) colonized the American continent from Africa as a stowaway in slave ships that trafficked slaves. With the mosquito came yellow fever to the new continent. Later both would arrive at the most important ports in Europe. The tiger mosquito (Aedes albopictus) has also traveled hidden on commercial ships from Asia to the rest of the world in much more recent times. Globalization has allowed these species originating from tropical regions to invade new areas, but another human phenomenon has also helped: climate change.

The rapid expansion registered by both species in just under half a century has been facilitated by rising temperatures. Climate change has great effects on the distribution of many species by altering the climatic conditions of different regions. Ectothermic (or cold-blooded) organisms, such as mosquitoes, are not capable of generating internal heat, as, for example, we mammals do through various metabolic processes (Fig. 1). This makes your activity dependent on external heat sources. This explains its absence during the cold winter months and its revival in spring. Therefore, a warmer world, like the one we are heading to, is more favorable for tropical species. 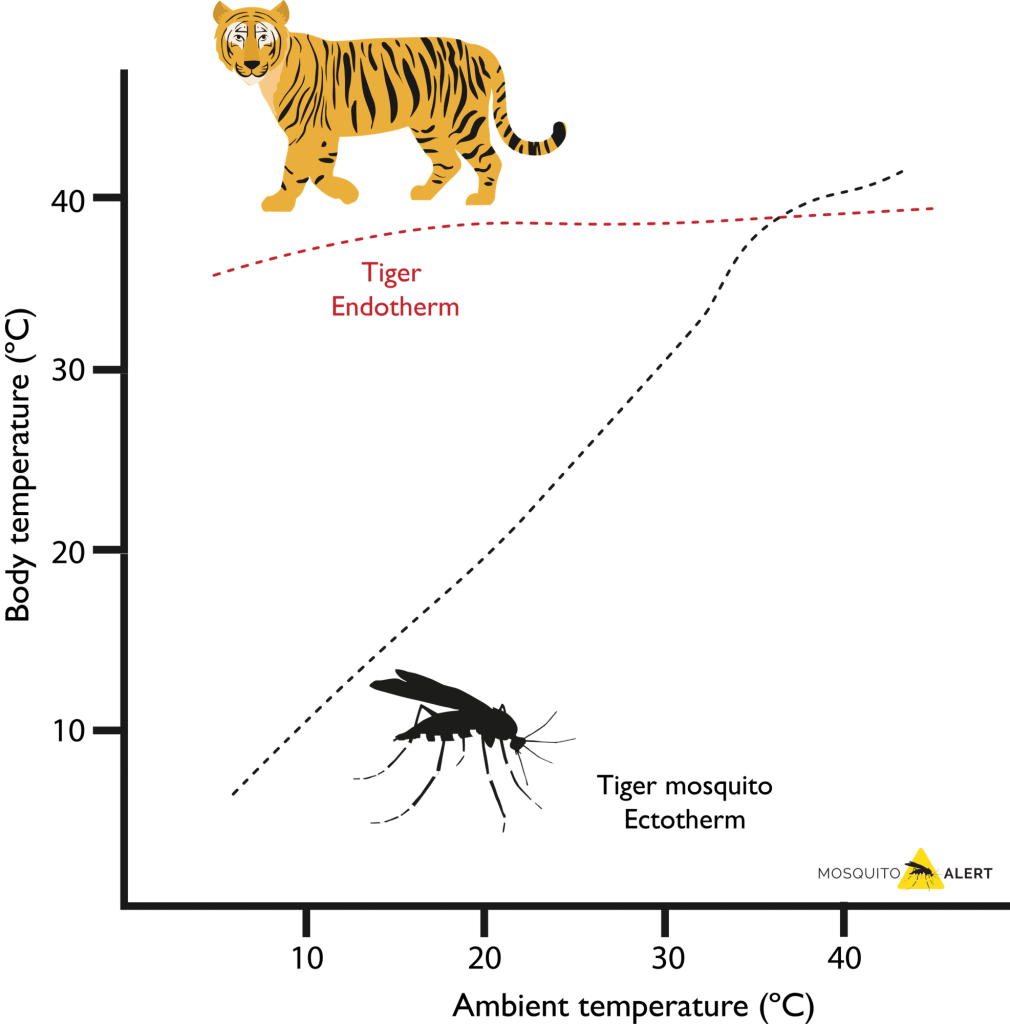 In recent years, studies have appeared that predict that both the tiger mosquito and the yellow fever mosquito will have an easier time expanding to areas that are now temperate as average temperatures rise. The warming will allow these species to find new favorable places where they can complete their cycle. Precisely the last study has been based on the ability of Aedes aegypti to complete its cycle in different climatic conditions to estimate how much and where it will be able to expand in the coming years.

For this they analyzed how temperature can affect the mosquito in its different stages of development: egg, larva, pupa and adult. The higher the temperature, the faster the transition from one phase to another. For example, from the time a female has fed on blood until she lays her eggs, 8 days pass at 20ºC. But if the temperature is 26ºC the time is reduced to 3 days. Only 2 days if the temperature is 30ºC. Or 4 if it exceeds 35ºC, because the excess temperature also affects them.

Using the temperature values ​​necessary for the animal to survive from one phase to another, as well as its speed as a function of temperature, scientists at Imperial College London and Tel Aviv University have been able to calculate how many times it could complete its life cycle the yellow fever mosquito in every region of the world. A greater number of completed cycles implies more mosquitoes and for a longer time. That directly translates into more likely to transmit diseases such as dengue, Zika or chikungunya.

The more life cycles completed per year in an area, the more mosquitoes and more exposure to the risk of contracting one of the diseases they transmit

Using historical data on world temperatures, as well as future projections under different emission scenarios, they have been able to make a model to predict the efficiency with which the mosquito will reproduce in different places in the coming decades.

In fact, the mosquito appears to have taken advantage of warming for the past half century. The warming recorded from 1950 to 2000 has allowed the species to expand, both within tropical and subtropical zones, and reaching temperate zones in Asia and America. In 2050 the species will move north more rapidly, especially in China and the United States (Fig. 2). The advance will be between 5 and 6 kilometers a year. It doesn’t seem like much, but it represents a huge annual increase in area and new human populations exposed to the mosquito.

Fig. 2. Predictions of the regions that will meet the climatic requirements in the coming years that may favor the establishment of the yellow fever mosquito. Source: Iwamura et al. 2020. Nature Communications 11: 2130

Europe may also be invaded by the species. The Mediterranean region in a couple of decades will have the ideal climatic conditions so that the mosquito can complete its cycle (Fig. 2). The authors estimate that by 2030 regions of Spain, Portugal, Greece and Turkey will meet the climatic requirements for the species to become established. In fact, in some of these areas it was already present in the past. Athens, for example, suffered a major dengue outbreak between 1927 and 1928, although from the 1950s the species began to disappear from the continent. Precisely for this reason they believe that their models underestimate the mosquito’s colonization capacity, and that if in not too distant times they were able to establish themselves in some regions of the Mediterranean and the Black Sea, with global warming their expansion may be greater than the one predicted by the models.