Catalonia confirms a case of West Nile virus in Reus (Tarragona) and studies a second suspected case. This is the first confirmed case of this disease in people in the community. The cases were detected after the admission of the two people to the Sant Joan de Reus Hospital on August 31, 2022 with a neurological condition.

Serious cases such as those detected represent less than 1% of infected cases, in fact it is estimated that 80% of infected people have no symptoms, and 20% only have mild symptoms, except for less than 1% which can have severe effects such as meningitis, encephalitis, flaccid paralysis or Guillain Barré syndrome. For these reasons, the detection of a confirmed case is considered an outbreak, since there may be several infected people who have not been detected because they do not present symptoms.

Unlike other diseases transmitted by mosquitoes, such as malaria or dengue, West Nile fever is not transmitted from person to person, but the virus circulates between birds and mosquitoes, occasionally jumping to people and horses (Fig. . 1). In fact, in Catalonia the presence of the virus had already been detected in birds and horses in 2017, and in 2021 infected mosquitoes were found, evidencing the circulation of the virus in the area. For the experts, the detection of cases in humans was a matter of time. . 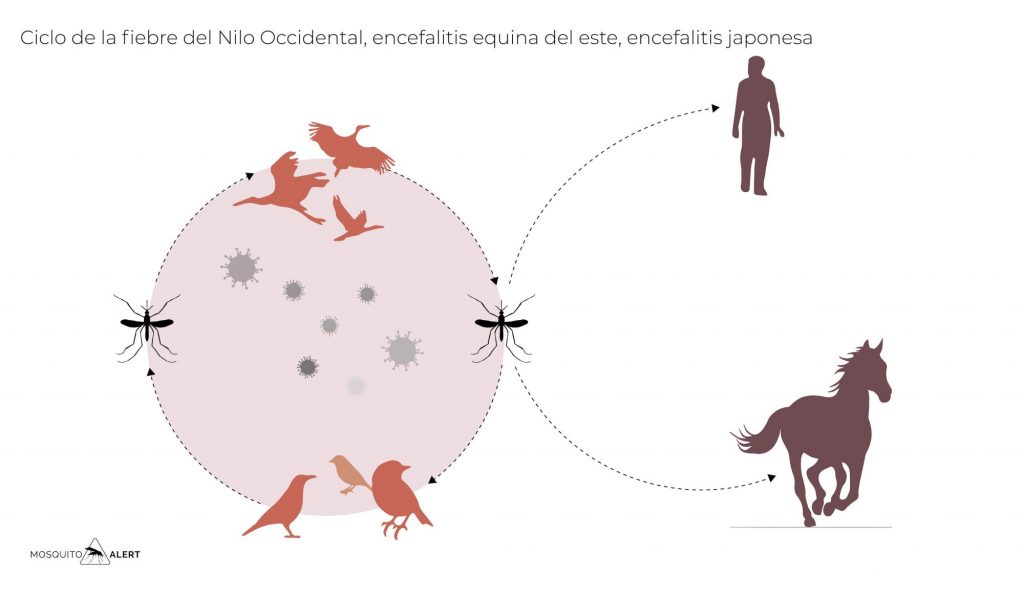 West Nile fever: an emerging disease in Europe that has been on the rise since 2010

West Nile virus in 2020, in the midst of the COVID-19 pandemic, was detected in 56 infected people in Seville, 15 in Cádiz and 6 in Badajoz, of which 97% presented meningoencephalitis and eight of them died. In 2021, six human cases were found in Seville, in the same area where the 2020 outbreak took place, as well as several outbreaks in horses: 9 in Andalusia and 2 in Catalonia. In these regions, an abundant presence of Culex perexiguus mosquitoes and the common mosquito: Culex pipiens has been detected. Both species can act as vectors by becoming infected with the virus by biting an infected bird and subsequently transmitting it to horses and people.

Although the first cases in Europe were detected in the 1950s, both in humans and horses, since 2010 a significant geographical expansion has been observed throughout the continent. So far in 2022, until September 14, the European Center for Disease Prevention and Control (ECDC) has recorded 874 cases in humans (see attached map), 781 of them confirmed, and with a total of 42 fatal cases . There have also been 44 outbreaks in horses and 175 outbreaks in wild birds.