The City of Barcelona uses Mosquito Alert, a mobile device application for tracking and preventing spread of the tiger mosquito

The City of Barcelona uses Mosquito Alert, a mobile device application for tracking and preventing spread of the tiger mosquito

Mosquito Alert is a citizen science project promoting active collaboration of citizens by way of its app, Mosquito Alert. The init iative originated in Catalonia and is capable of managing information from thousands of tiger mosquito breeding sites.

The Barcelona Pubic Health Agency (ASPB) has joined the Mosquito Alert  project and is promoting the mobile device application Mosquito Alert throughout the city. The city aims to encourage citizen use of the application in order to gain information about the distribution of the tiger mosquito and particularly about potential breeding sites. The web site www.MosquitoAlert.com provides detailed information about this scientific initiative which has improved observation and control of this species that has already existed in Barcelona for 10 years.

Participation of citizens with mobile devices will help uncover many more details about possible tiger mosquito breeding sites in different parts of the city, especially places or containers where the mosquitos are reproducing and larvae are found; common examples include drainages, ornamental fountains, barrels, etc.

All data received via the application, including georeferenced photographs, are provided openly and in real time in interactive maps at the web page Mosquito Alert.

The Mosquito Alert mobile application was developed for the initiative Mosquito Alert, a citizen science project coordinated by the Movement Ecology Lab of the Blances Center for Advanced Studies of the Spanish Council for Scientific Research (CEAB-CSIC) and CREAF.

The head of the Barcelona Public Health Agency’s Tiger Mosquito Monitoring and Control Program, Tomás Montalvo, explains that this tool “will make valuable information available for improving monitoring and control of this species in the city. We need to remember that preventing the pest’s spread is everyone’s responsibility, especially since this species mostly reproduces on private properties where it finds a large variety of small containers which can at times contain water.” He adds, “projects like this one are contributing in an important way to improving citizen coexistence and quality of life in Barcelona.”

ICREA research professor, CREAF associate researcher and director of Mosquito Alert, Frederic Bartumeus, promotes collaboration with citizens: “we are aiming for a kind of citizen science and management model which is participative and open, where citizens, scientists, and prevention agencies work together to minimize problems associated with the presence of this invasive species.” The creators of the project explain that this “will lead to the creation of models which permit the prediction of populations of tiger mosquito in the city, combining the citizen contribution with data from the Public Health Agency.”

Currently, the project has support of Obra Social “la Caixa” and the program Ayudas a la Investigación Recercaixa, the Spanish Ministry of Economy and Competitiveness, and the company Lokímica. It has also received support from the Spanish Foundation for Science and Technology (FECYT) and the brand Bloom. 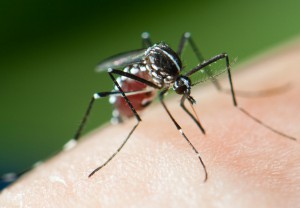 A species whose spread must be prevented

The tiger mosquito (Aedes albopictus) is an exotic invasive species that causes bothersome bites and is capable of transmitting diseases under certain conditions. It lives in urban areas, flies low to the ground, and bites during the day. Characteristics for identification include its black color with white stripes and a white line on the upper side which passes down the head and thorax.

The most efficient waytoprevent spread of the tiger mosquito is to prevent its reproduction by doing away with its breeding sites. The tiger mosquito lays its eggs in small containers with water. Considering that it reproduces mostly on private property, the most important thing is to not allow water to accumulate in containers at home, including pots, buckets, barrels, watering cans, small pools, etc.

Barcelona Public Health Agency (ASPB) has hada program for control of the tiger mosquito in the public spacesince 2005. Thanks to this program, awareness is spread to citizens, continuous monitoring is underway in different risk areas (there are 68 risk zones in 2015), and cases of arboviruses within the city are monitored and controlled to avoid potential transmission of diseases. Each year the ASPB manages around 250 incidents related to the tiger mosquito, leading to around 800 control interventions.