This March the journal Annals of Biology publishes an article documenting the first finding of the mosquito Aedes vittatus in Galicia, a finding made through citizen participation in the Mosquito Alert platform. This is a native mosquito which is known to exist in different areas of Spain, but up to now it had never been documented in Galicia.

For over three years the Mosquito Alert has continued in its mission to monitor and study the tiger mosquito in Spain with the help of citizens. Using the Mosquito Alert app, anyone can send photos of the mosquito and its breeding sites in order to improve its tracking and control.  The project has also added the yellow fever mosquito, not currently present in Spain with the exception of a few individuals recently found in the Canary Islands. Though tracking of other mosquitos is not the main focus of efforts, the project’s activity has however now led to the identification of a native mosquito species in an area where it had never been found before. The finding was made by a volunteer using the app thinking that they had found a tiger mosquito.

Roger Eritja is the head of a team of experts who validate the sightings sent to the citizen science platform Mosquito Alert, a project coordinated by CREAF, CEAB-CSIC, and ICREA. Entomologist at the Baix Llobregat Mosquito Control Service and nature photographer, Roger has worked in management and control of mosquitos for more than 35 years. In particular, he had a key role in finding and studying the tiger mosquito in Spain when it was found for the first time in 2004.

What does it mean to have found this mosquito, Aedes vittatus, in Galicia?

Finding species in new places without a doubt improves our knowledge of biodiversity. We could know a lot more about the distribution of mosquitos if only more people would work on this subject. Historically, this field has not been given much attention. In fact, it is very likely that this species in particular, Aedes vittatus, is much more widely distributed than thought, the problem is a lack of studies to document it. There aren’t many specialists searching for mosquitos, but that said the situation has improved over the past number of years. 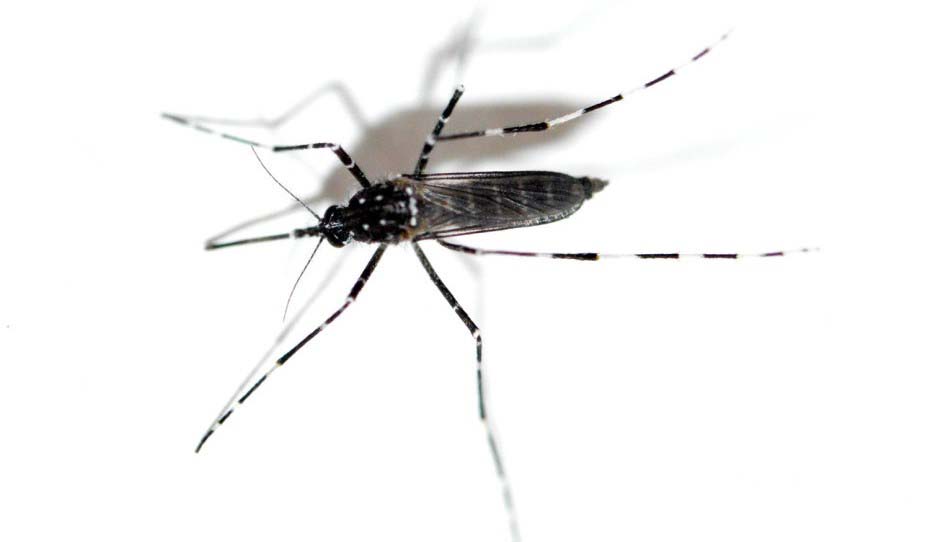 Why are there so few mosquito experts if it is exactly this group of organisms which is so deadly?

Mosquitos have been the cause of huge historical endemics; nevertheless, there have been many periods during which they have been forgotten. With the arrival of the epidemics a lot of work was done in the scientific and sanitary fields, but once the diseases disappeared interest was also lost. During the first half of the 20th century for example there were a lot of studies of mosquitos due to the occurance of malaria and since it became understood that the epidemics yellow fever and dengue experienced over the previous two centuries were caused by Aedes aegypti.  During this period we had classic experts including Pittaluga, Arias, De Buen, and Gil Collado, among many others.  Later, following the devastation of the post-war period, malaria was finally eradicated, and so then it wasn’t until the 1980s that a seminal book by Encinas Grandes was published, “Taxonomy and biology of the mosquitos of the Salamanca region (Diptera, Culicidae).” It was around that time that the first public services for mosquito control were established and that the topic was again given attention.

Currently, worldwide colonization by the tiger mosquito and the risks this poses to public health has led to increased studies on culicides.  That said, the potential health impacts of mosquitos in Europe is moderate since EU countries have resources for prevention and intervention.  Most efforts are focused in disadvantaged countries where these diseases are endemic and have higher human tolls.

Going back to Aedes vittatus in Galicia, tell us about this finding.

On September 12th 2017 we received a photo sent from Galicia via the Mosquito Alert app, specifically from the province of Pontevedra. At first the team of expert validators thought that it could be a female tiger mosquito, but it was a bit strange because it also seemed to have characteristics of another mosquito which had never been found in Galicia.  This is when we decided to open an invetigation in order to find out exactly what mosqutio species it was.  For this a photo wasn’t enough, we would have to get a well-preseved individual. 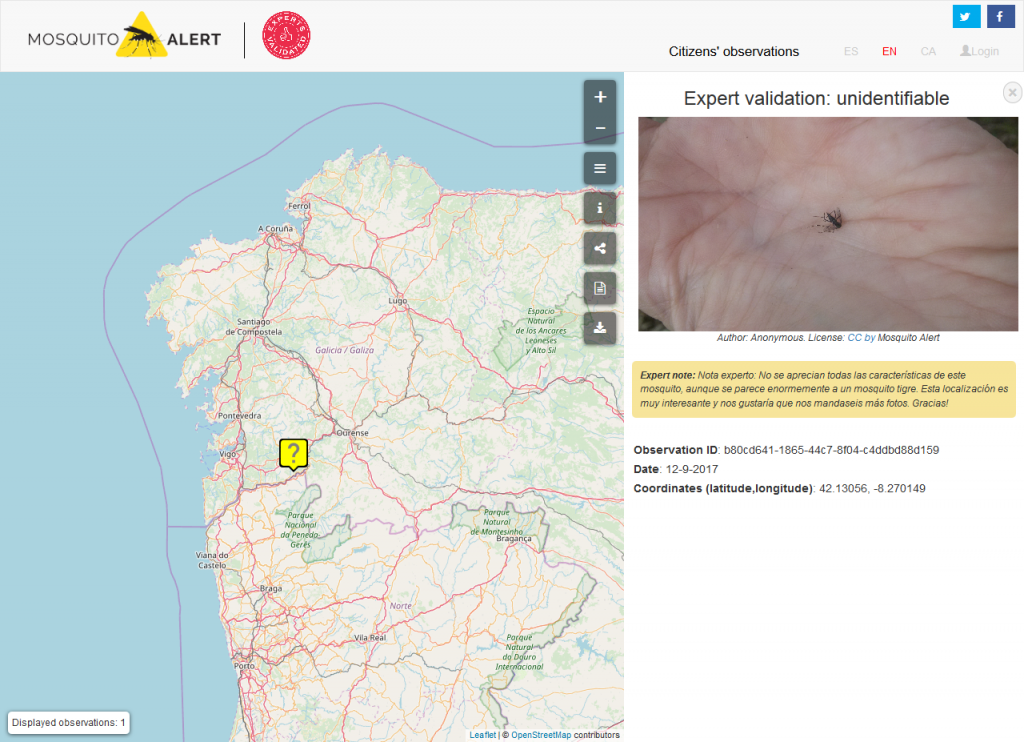 Screenshot of the report in the map.

How did you contact the person who sent the photo?

At that time we only knew that it had been sent by someone in Galicia but we didn’t know their name or any other personal information since the users of the app are kept in complete anonymity. However, the Mosqutio Alert app is equipped to send notifications to the mobiles of the users, so this is how we got in contact with this person who in fact repsonded immediately. We asked them to capture another mosquito of that type and send it to us by mail. And that’s what they did. In fact this person had some knowledge of biology and this was a great help since they followed the instructions quite well. For instance, they put it in the freezer to kill it without shaking the sample too much and this helped preserve the animal intact. Once it arrived to the laboratory I was able to examine it and confirm that it was not a tiger mosquito but rather another species which had never been found in Galicia, Aedes vittatus.

If this person sent the photo thinking that it might be a tiger mosquito they must have a very similar appearance.

Aedes vittatus is black and also has white lines on the abdomen and legs. This is the reason that someone may be mistaken to believe that it is a tiger mosquito. However, the thorax is what is different: the tiger mosquito has a white line and Aedes vittatus has between 4 and 6 white spots.

What is notable about this mosquito?

The mosquito Aedes vittatus is active during the day and especially when the sun is setting. It will suck the blood of any mammal. The habitat for its larvae are holes in rocks along streatms and rivers, where it lays its drought-resistant eggs in the mud just above the water line. These larval breeding places are characterized by their exposure to direct sunlight and for having fresh water, though the species can also tolerate some degree of brackishness. They are also occasionally found in artificial containers and in flooded tree cavities. 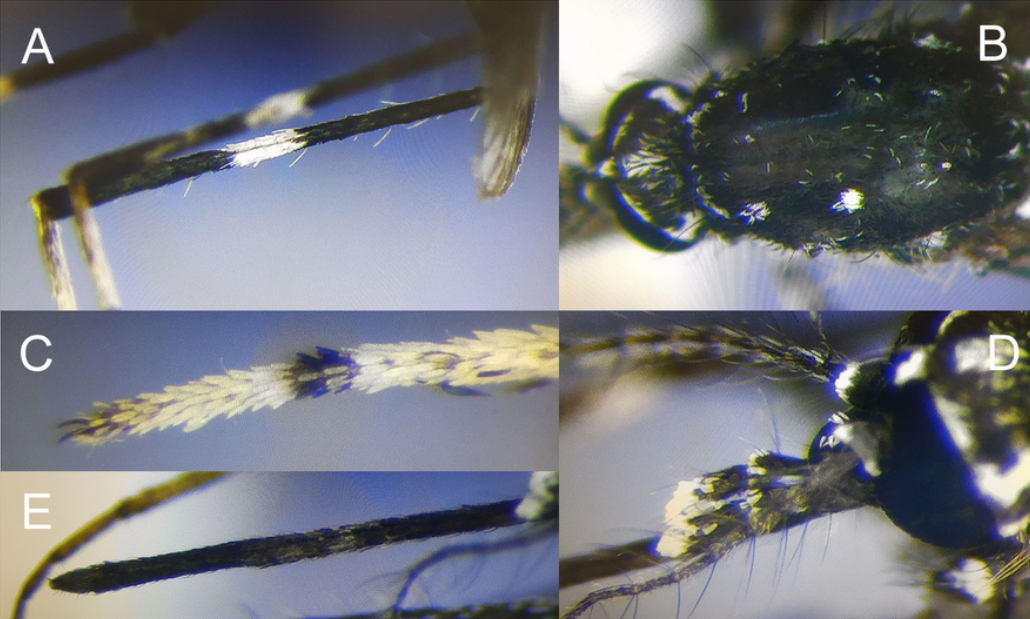 This is the first time that this mosquito has been found in Galicia, but its presence in many other places in Spain has already been known for years. Is it an invasive species like the tiger mosquito?

Aedes vittatus is not an invasive species, you could say it has a “residence permit.” It was described for the first time in Corsica with the name Culex vittatus by the naturalist and entomologist Jacques-Marie-Frangile Bigot in 1861. Later the name was changed. The species has a Palaearctic distribution, very infrequent on the African continent and less common in Western Europe. Nevertheless, in Spain it has been found in the provinces of Alicante, Balearic Islands, Barcelona, Caceres, Castellón de la Plana, Ciudad Real, Cordoba, Girona, Jaén, Salamanca, and Segovia. Now I suppose that Pontevedra has to be added to the list. It’s important to keep in mind that Spain has 58 known native mosquito species, with the addition of two invasives: the yellow fever mosquito (Aedes aegypti) which was present from 1700 to 1939 and since then has disappeared, and the tiger mosquito (Aedes albopictus) which arrived in 2004 and has become established.

What will you do with the captured individual?

We have incorporated it into the entomological collection of the Mosqutio Control service of the Baix Llobregat County Council. In the observation map [of the Mosquito Alert platform] you can see the original photo of the mosquito found in Galicia.

There are studies that say that this species may also be able to transmit diseases such as Zika, Dengue and Chikungunya. Is this something to worry about?

It is true that in Africa the mosqutio has been associateed with some outbreaks of yellow fever, and in the laboratory it has been shown to have the capacity for transmitting this and other diseases. However, the real risk depends on other things such as the abundance of the mosquitos, the frequency of contact with people, and the presence of infected individuals. It is not a species which is found indoors since it does not seem to have adapted to breed in containers in urban areas like the tiger mosquito. Normally we don’t find Aedes vittatus very often, and when we do it is during short periods of the year in forested areas, so contact with people is limited. In this sense it is very different from the tiger mosquito and yellow fever mosqutio, which tend to be very abundant and living near large concentrations of people during the warmest times of the year. For these reasons it is not worth worrying too much about Aedes vittatus.

Some recent studies consider citizen science to be a great ally for the study of biodiversity. Do you think that it can also improve knowledge about the biodiversity of mosquitos?

Yes, obviously it can. Citizen science has a high potential since it it allows such specific tools as this one to be very useful, combining a community of motivated volunteers with a team of highly qualified entomologists. Our platform is geared towards detecting two specific mosquito species, but this case has shown that we also have the capacity to detect rare species. In fact, there are other citizen science projects studying mosqutio diversity, for example the german platform MuckenAtlas. However, that project requires the volunteers to physically send the found mosquitos in order to identify them in the laboratory. Our case has been quite relevant because we have detected a rare species based on only a photograph, something that requires a lot of experience.